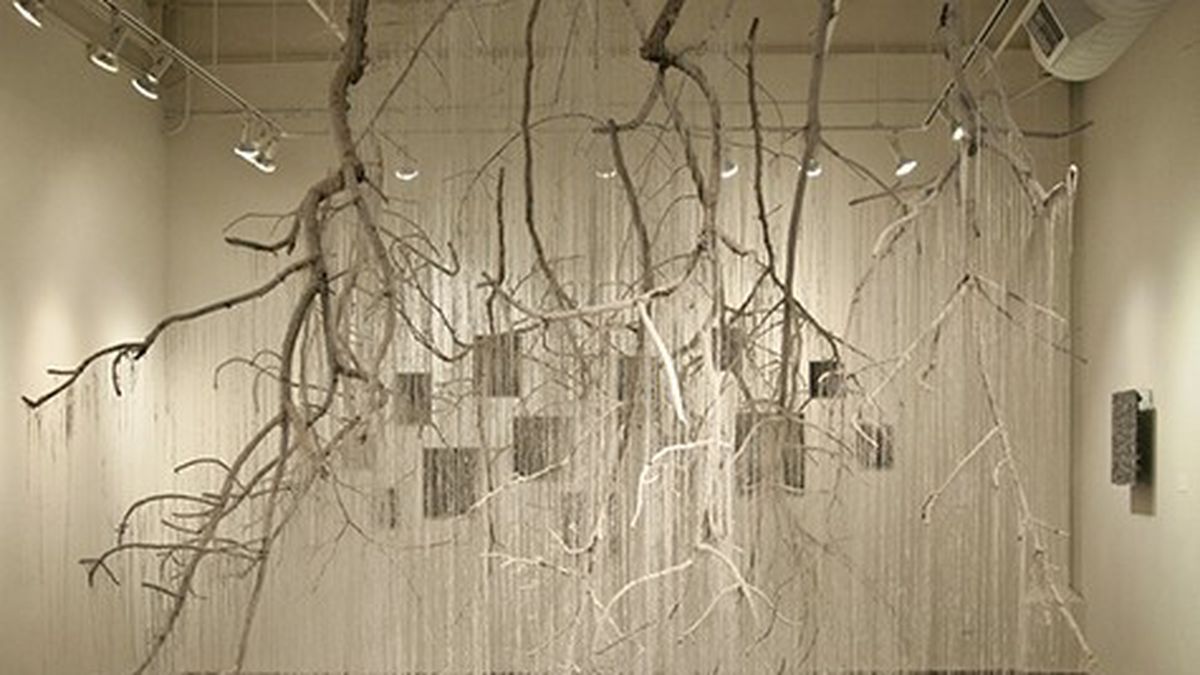 The show, which also features fascinating works by Ranu Mukherjee, Freddy Chandra, and Desirée Holman, presents a group of Kala’s fellowship alumni. With explicit allusion to Kala’s groundbreaking 1982–1992 program Seeing Time, which involved installations and performances throughout the Bay Area exploring the visualization of time, Kala curator Mayumi Hamanaka intends for this show to expand on that theme, investigating the notion of time travel.

Onishi’s stunning installation “Vertical Emptiness” stands out because it combines fine detail and large scale. This site-specific installation is one incarnation of a piece that was first created for the Kyoto Art Center. It consists of several tree branches hung upside-down from the ceiling, draped with thousands of strings of hot glue that fall to the floor, and are sprayed with a white, snow-like substance called urea. The room-size result evokes an upside-down frozen wonderland. The long threads of glue create a stringy forest of white tendrils reaching delicately for the earth. In an interview, Onishi explained that his intention was to create an inverted world, in which people are standing upside down in the sky, experiencing gravity backwards.

A collection of painting-like wall-hanging sculptures is displayed behind the installation, forming windows into a contrasting black backdrop. They are created from black hot glue, graphite, and aluminum powder mixed and layered on wooden panels. Onishi calls most of these works “Plate of Phenomena,” because they are process-based explorations of the various states that glue embodies as it transforms from a heated liquid to a cold solid. He applies the heated glue onto the canvas, then manipulates it as it dries in order to form organic textures that reflect its transformation over time. Each thread of glue left on a branch in Vertical Emptiness, similarly creates a tangible record of its own movement through time and space, as it solidifies on its way to the ground.

Another testament to time embedded in Vertical Emptiness is the work’s own ephemerality. Onishi spent an entire week in the gallery dripping glue from each of the branches. But, like a sand mandala, Onishi’s installation must be destroyed at the end of the show, for lack of a method to preserve it. Its appearance is like a flashlight shining on a thinly woven spider web, illuminating glistening architecture within the void of darkness, as if, for a moment, revealing the invisible infrastructure of the weightless parts of the world.