The Killer Inside Me doesn't pull its punches. But Cyrus and Air Doll do. 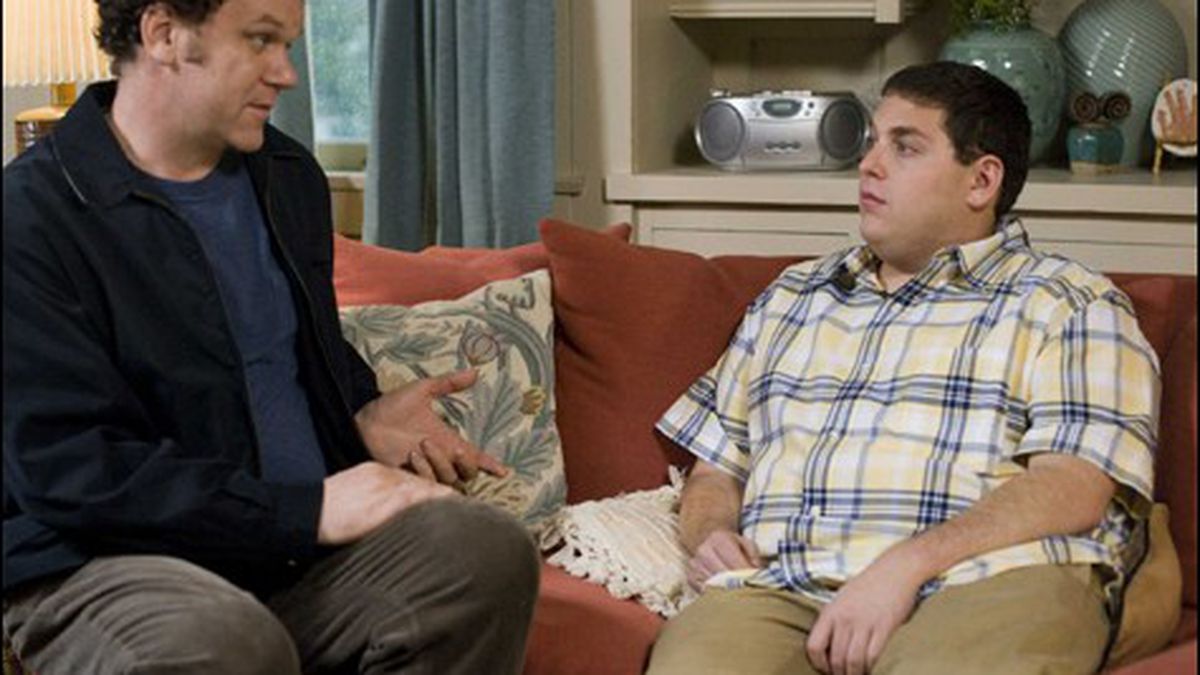 Those whispers from the film festivals turned out to be true: Michael Winterbottom‘s The Killer Inside Me falls a bit short of the most successful adaptations of magisterial noir author Jim Thompson‘s work. Director Winterbottom, screenwriter John Curran, and actor Casey Affleck adhere closely to the unnervingly bitter novel about a psychopathic sheriff’s deputy in a Texas oil town in the early Fifties, but the essence of Thompson — notoriously elusive for filmmakers — finally escapes them.

Affleck brought all of his odd intensity to the squirrelly role of Bob Ford in The Assassination of Jesse James by the Coward Robert Ford, and he walks a similar dusty road as Deputy Lou Ford (no relation, except perhaps in the mind of the author). Lou likes to let us in on his seemingly random thoughts in voiceover. He’s even crazier than the other Ford.

Behind his high-pitched voice and beady eyes and the no-sirs and yes-ma’ams, who in the world would peg Lou as a murderer, sadist, pederast, whore-beater, serial butt-spanker, and classical music fan? Oh, just about everybody in Central City — including his girlfriend Amy (Kate Hudson, treading water), a blackmailing prostitute named Joyce (Jessica Alba, eminently spankable), the local real estate developer (Ned Beatty, well cast), and a skeptical union official (Elias Koteas, ditto). Almost all of the scabrous dialogue is lifted from the book.

The Killer Inside Me contains not one, but two of the most vicious movie beatings in recent memory. However, graphic violence is only part of the Thompson experience. The author set a palpable tone of resignation and advanced moral decay that cannot be duplicated through realistic physical violence alone. You have to earn rottenness like that. And how many adapting filmmakers really want or need to go there? Stephen Frears did, in The Grifters. Bertrand Tavernier‘s Coup de Torchon captured the stink, as did Alain Corneau‘s Série Noire. Winterbottom frequently cuts away to period rockabilly and country jukebox tunes, as if he were shying away from Thompson’s nastiness. And maybe he should.

The Baghead boys, writing-directing brothers Jay and Mark Duplass, were evidently only fooling around with that meagerly plotted, half-witty 2008 horror spoof about a guy with a bag on his head terrorizing slackers in a cabin. The Duplasses didn’t actually care about the horror genre — but we knew that all along. What the two Sundance geniuses really wanted to make were romantic comedies.

Cyrus seems to be yet another attempt, in the wake of The Promotion and Walk Hard: The Dewey Cox Story, to fashion a convincing leading-man role for John C. Reilly. The 45-year-old character actor has made a fine career playing plug-uglies in such movies as Gangs of New York and Talladega Nights: The Ballad of Rocky Bobby, but apparently that isn’t enough.

In the Duplass brothers’ Cyrus — their first film outside the low-budget “mumblecore” ghetto — Reilly plays John, a frustrated, middle-age Los Angeles divorcée still hung up on his ex-wife Jamie (Catherine Keener) yet too emotionally burnt out to get back into the dating game, seven years after the break-up. Jamie left John essentially because he was a loser, but the two maintain a close — maybe a little too close — relationship. John always comes running to Jamie whenever he has a problem. And she still has the key to his house, which is the basis of the gag in the movie’s first scene — she walks in on him masturbating.

Somehow, chicken-choker John makes friends with another un-swinging single, Molly (Marisa Tomei). So what’s a babe like Molly, with that lithe stripper’s body from The Wrestler, doing with a tree-stump-faced guy like John? Movie magic. John finally gets laid, Molly appears to truly like him, and all seems well. Not so fast. Molly has a ghost from her past as well — her twentysomething son Cyrus (Jonah Hill from Get Him to the Greek), a clinging, stay-at-home, bland-faced, blob-like man-child completely dependent on his mother. Cyrus is scarier by far than any Baghead — you can tell by his synthesizer collection.

It’s the clash of the man-children. In fact, there’s not a single strong — to hell with “strong,” adequate will do — male character in the film. John’s a crybaby, Jamie’s fiancé Tim (Matt Walsh) is a mousy dork, and Cyrus? Well, we wouldn’t want to turn our back on Cyrus. Ever. Even more puzzling is the fact that the women in the piece, women with the sexiness and personal verve of Tomei and Keener, seem so satisfied with their slim pickings. Makes us wonder about them, too. The ending is as warm and mushy as a fresh cow pie. As a romantic comedy, Cyrus ranks just ahead of Henry: Portrait of a Serial Killer.

Hideo (Itsuji Itao), a meek, solitary Tokyo-ite who waits tables at a restaurant, comes home every night to the cold comfort of a plastic sex doll whom he calls Nozomi. He sits down for dinner with her, tells her about his day, penetrates her, and, after carefully rinsing out the detachable vagina, beds down with her for the night. Then, one magical day after Hideo has departed for work, Nozomi (Korean model and TV star Bae Doo-na) comes to life. She begins exploring the sphere of human beings, at first dressed in her French maid’s outfit, later in clothes she buys for herself — always returning in the evening to play her role for her unwitting “master.”

What a lurid vein of lowbrow satiric thrills and revelations Yoshiie Goda‘s original manga concept might have been. But filmmaker Hirokazu Kore-eda, who adapted Air Doll‘s screenplay as well as directed it, isn’t much of a guy for sardonic guffaws or gratuitous bawdiness. Kore-eda ignores that vein completely, settling instead for a dreary, middlebrow allegory — very much in the spirit of the maudlin parts of his overrated 1998 film After Life — that dwells on Nozomi’s interactions with a succession of lonely urbanites trying, as she is, to connect emotionally with others.

No Pinocchio, Nozomi takes a job at a video rental shop and begins to network diligently: a fellow clerk, the video store owner, a little girl, an older woman — each more pathetic than the last. She makes observations, too: “I found myself with a heart, a heart I was not supposed to have.” Kore-eda has a heart. He proved that with Maborosi, Nobody Knows, and Still Walking. But Air Doll wears that compassion on its sleeve a little too earnestly and humorlessly. Even an airhead could see that.

Previous ArticleWhitman Could Save 64% on Energy If She Went Green