.This Hole-in-the-Wall Is Doing What No Other Restaurant in Oakland Is 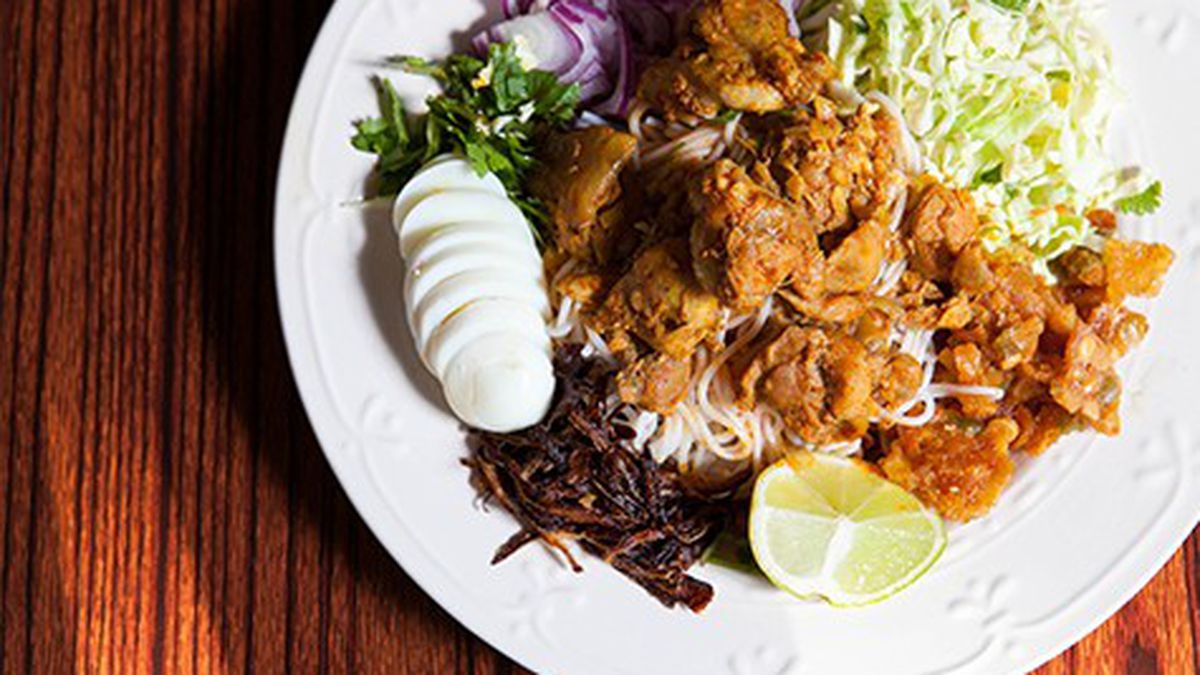 At Grocery Cafe, a new Burmese restaurant tucked away on a quiet residential street in Eastlake, lunch feels more like a church basement potluck than it does a sit-down restaurant meal. You sit on a repurposed church pew or a folding chair, amid the mismatched tables and the hodgepodge of Sixties and Seventies album covers that adorn the walls. The food comes out in heaping platters and big, steaming bowls of soupy noodles — and if you haven’t peppered the server with questions beforehand, there’s a good chance you won’t be sure exactly what it is that you’re eating.

Still, in a city that is replete with hidden kitchens, where unexpected deliciousness abounds, the restaurant is worth the extra effort you might have to put in to seek it out.

Open since December, Grocery Cafe follows a well-established tradition of tiny Southeast Asian eateries opening shop in hidden-away residential neighborhoods, doomed never to be discovered by the general dining public — were it not for the fact that the food is so damn good. (Consider Vientian Cafe and Champa Garden, two of the city’s best, and most obscurely located, Laotian restaurants.) In this case, the name of the business, “Grocery Cafe,” is confusingly generic — and anyway, until recently, the only signage consisted of a couple of “GC”-shaped planter boxes and a large, incongruous banner for a coffee roasting company. A new banner declares, simply, “BURMESE CUISINE.”

In some respects, Grocery Cafe is the anti-Burma Superstar — a down-home foil to the trendy Bay Area institution, which is legendary for its long lines and for first bringing the pleasures of the Burmese tea leaf salad into America’s broader public consciousness. The chain’s posh Temescal outpost boasts pretty, tropical cocktails and a constant gaggle of attractive, tight-jeaned Warby-Parker wearers on the sidewalk outside, braving hour-plus waits for a table.

At Grocery Cafe, I was the only diner during all of my visits. There were no cocktails on the menu, though the display case did feature a tray of fresh betel nuts — Southeast Asia’s answer to chewing tobacco and a popular item among the taxi and delivery-truck drivers who sometimes frequent the restaurant.

As for the food, a concise menu developed by co-owner William Lue and cook Koot Aung hews toward homey flavors and preparations, with no compromises made, as far as I could tell, to accommodate the delicate Western palate. Most of it was just straight-up delicious.

Start with the most famous Burmese dish, the tea leaf salad — a colorful and pungent mixture of dark-green fermented tea leaves and an array of aromatic, crunchy things: sesame and sunflower seeds, fried chickpeas, toasted garlic, cashews, peanuts, and sliced cabbage. Grocery Cafe’s version was one of the most potent I’ve had by virtue of the fact that, unlike most Burmese restaurants in the Bay Area, Lue and Koot Aung don’t water it down by adding lettuce. Even better, the salad featured tiny, whole dried shrimp, which dialed up the umami-rich funk and added another interesting textural element. Wash this salad down at lunchtime with hot tea, as the Burmese do, and you might be wired for the rest of the afternoon.

The fried samusas — Burmese cuisine’s variant on an Indian samosa — were another winner. They came nine to an order (yes, nine, for only $7) and featured thin, extra-crispy, spring-roll-style wrappers and a tamarind-spiked potato filling that had more of a kick than your typical yellow-curry version.

But my favorite was the nan gyi thoke, a street-food-style dish that was something like a cold (or room temperature) noodle salad: a mixture of squiggly, spaghetti-like rice noodles, chicken, hard-boiled egg slices, shards of fried bean fritters (made with yellow split peas), and slices of raw onion and cabbage, all tossed in a tingly hot tangy sauce. As with the tea leaf salad, the pleasures of this dish are largely textural — layer upon layer of crunch. One final elegant touch: Finely slivered lime leaf added a wonderful, citrusy freshness.

The nan gyi thoke portion was absurdly large, probably enough to feed three people — though, lo and behold, I finished every bite. Did I mention that, as an opening promotion, every dish on the menu is $7? Lue said he might charge a little more if they put a seafood dish on the menu, or perhaps offer larger portions (!) for a couple extra dollars, but otherwise the prices should stay the same for at least the rest of the year.

Chowdery noodle soups are another hallmark of Burmese cooking, and Grocery Cafe is a good place to get your fix. The mohinga, a kind of fish chowder that some consider to be Myanmar’s national dish, was a homey, stripped-down version loaded with small chunks of catfish, soft rice noodles, slices of hard-boiled egg, and more of those crispy bean fritters. The ohno khao swe was a variation on the same theme, except with pieces of tender chicken, thick wheat noodles (again, cooked very soft), and a mild coconut-milk-infused broth that had been thickened with crushed yellow split peas. Both soups fell squarely in the comfort food category. If they had any fault, it was that they were slightly blander than I would have liked, but a squeeze of lemon and a spoonful of the scary-looking house-made chili paste (which looked to be 98 percent chili seeds) did wonders to spark them up.

For the noodle averse, there was a dry masala curry that featured chunks of well-seasoned chicken, large cubes of potato, and a heavy dose of fresh ginger and lemongrass — tasty enough as a savory counterpoint to white rice, but somewhat less memorable than the other offerings.

Lue has been a fixture in the Bay Area’s Burmese dining scene since the Seventies — most recently at The Refined Palate (a restaurant that he and business partner Theodore Wang also own in Orinda) and, before that, at a short-lived pop-up he ran at the now-shuttered West Oakland soul food restaurant Brothers Kitchen. Given Grocery Cafe’s location and its very humble amenities, he said he doesn’t mind if the restaurant doesn’t yield too much of a profit. “It’s not like a normal restaurant,” Lue said.

With a place like this, you just embrace the eccentricities and roll with the punches. The nan gyi thoke might unexpectedly (but deliciously) come with thick slices of ham one time you order it, and none the next. I found the hours to be somewhat erratic, so it’s best to call ahead to make sure the restaurant is open, especially once you get toward dinner hours.

None of which is to say that the project is without lofty ambitions. Lue’s original vision was for the “grocery” component of Grocery Cafe to be more prominent — for it to be a kind of produce market and neighborhood bodega, in addition to being a restaurant. He grows some of the herbs and chilies he uses on site, including the notorious Trinidad Moruga Scorpions (which boasts 1.2 million Scoville units). And there are a handful of prepared items you can buy from the display case up front: betel nuts, Burmese-style kimchi, and, best of all, a house-made dried-shrimp condiment called balachaung, which is like an amped-up, extra-pungent version of Hong Kong-style XO sauce — delicious over rice.

But Lue also has Hmong farmers in Fresno growing obscure Southeast Asian vegetables for him — roselle leaves and opo squash — and by the spring or summer, he expects the harvest will be big enough that he’ll have some left over to sell to customers. And you’ll be able to add that to the list of things that no other restaurant in Oakland is doing.