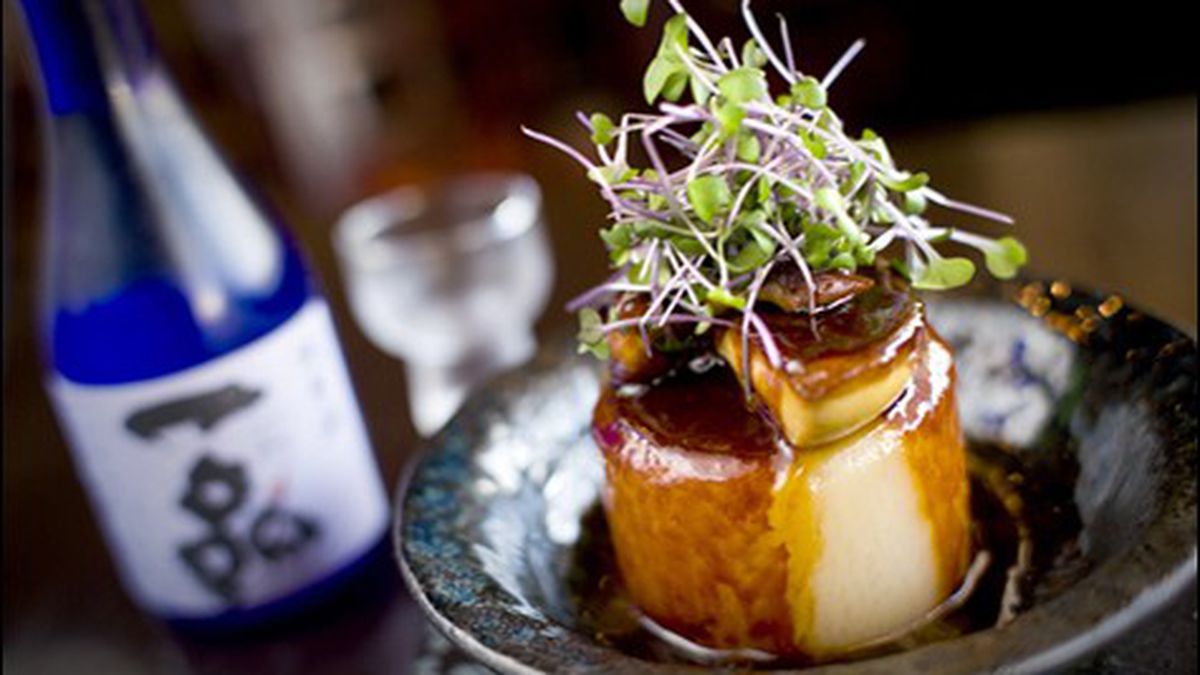 A little college math: At Kiraku, Berkeley’s newest izakaya restaurant, you can get four rice crackers, each topped with a smear of brie and a daub of pickled wasabi, for five dollars. Across Telegraph Avenue at Pasta Bene, you can get a huge trough of spaghetti and meatballs or a Flintstones slab of beef lasagna for just two dollars more. If you’re a cash-strapped co-ed, where are you headed?

Kiraku makes no secret of setting its sights beyond the UC Berkeley crowd. The only reason the husband-and-wife team of Daiki and Sanae Saito settled on this dorm-friendly location — between Blake and Parker streets, almost next-door to Japanese restaurant Norinoko — was cheap rent. Given their druthers, they’d be in Mountain View, home to a large seam of Japanese ex-pats, or San Francisco, where new izakayas dot the landscape with the near-ubiquity of sushi joints and pizzerias.

Here in the East Bay, this style of booze-backed populist dining has a handful of champions, but not much of a fleshed-out scene. Clearly the Saitos think Berkeley needs some schooling on izakayas: A menu board out front patiently gives the Cliffs Notes description (beer, sake, small plates, and laughter) and their awning uses the wince-worthy shorthand “Japanese Tapas.”

But though you may be clear on izakaya elementals, Kiraku makes frequent detours. Daiki Saito, who spent ten years cooking at a French restaurant in Tokyo before moving to the States in 2007, picked up some vestigial continental kick. Balsamic reductions, foie gras, garlic, and gorgonzola are peppered into Kiraku’s long-form menu, and the foraging doesn’t stop in Europe. Saito also throws in Korean and Chinese accents because, well, that’s what he enjoys.

“Really, izakaya food is whatever the chef thinks will be good to drink with,” said Sanae Saito. “There are no rules.”

At Kiraku, there are also no skewers. The Saitos stock some izakaya staple foods — deep-fried chicken karaage, edamame, pickled everything — but yakitori isn’t their thing. If you’re looking for grilled stuff on a stick, head to Ippuku or B-Dama.

There are lots of obscure pickled goodies on the starters section of the menu but sadly, these are not house-made; they’re Japanese imports, trucked to Kiraku via South San Francisco. I still couldn’t resist trying one item — a lavender tangle of raw, fermented firefly squid, more notable for the disarming pop of innards on the tongue than for the flavor, a low-key sesame tang.

On the fried section skip the standard-issue karaage and agedashi and try something new, like corn tempura. These sweet corn niblets, haphazardly formed into rutty little pucks, are a Kiraku original. The kernels stay cool and juicy inside a scorching tempura shell, steeped in oil and dusted with green-tea salt. The nasu miso is a pair of tall, skin-on eggplant rounds, fried and doused in sweet miso gravy. A crème brûlée crust is formed on the exterior; poke your spoon through for the steaming hot porridge within.

Buta kim is a fried egg atop thinly sliced sautéed pork and kimchi in a sizzling sauce of red chili and fermented soybeans (one of Kiraku’s interspersed nods to spicy Korean fare). In another fiery dish, incredibly tender, slow-stewed beef tongue and eggplant cubes are served in a tomato-based pepper sauce.

For those willing to shell out a few more bills, try the fascinating foie gras daikon. Atop a large shimmering mound of stewed daikon are a few precious pieces of crisp-edged foie, doused in sticky miso sauce. It’s an ideal marriage, pairing the daikon’s studied neutrality with the pâté’s silken riches. (The miso is superfluous.) Note: If conscience allows, try this one before California’s foie ban goes into effect July 1.

In another high-end offering, sake lees, a rice-based byproduct from the sake fermentation process, is drizzled over thin carvings of grilled black cod. Sake lees has a miso flavor with a touch of sweet, teasing some playfulness out of the austere, fatty fish.

Saito also shows spunk with the yaki udon, where traditional tube noodles are dressed in basil pesto, tossed with trumpet mushrooms and wasabi-marinated octopus, then topped with dried bonito flakes. This unlikely dish worked; the wasabi gave a little rocket fuel to the mild pesto, with the mushrooms slices adding textural balance. The fish flakes acted more as an aesthetic garnish than a flavor additive.

If the yaki udon reveals the chef’s skill at unlikely combos, sometimes the merriment gets out of hand. The staggering pork belly “omelet salad,” a Saito invention, was essentially a puffed-out omelet enveloping a few thin shavings of sautéed pork belly and a massive amount of raw cabbage filler. With Japanese pancake sauce and mayo squirted on top, this one felt like a failed late-night “what’s in the fridge?” experiment.

Speaking of late nights, Kiraku’s predominantly Korean and Japanese clientele gets re-tooled after nine or ten every evening. Local chefs have started making Kiraku the destination for their rowdy post-shift bacchanals, often keeping the kitchen humming until 2 a.m. And who can blame them?

Combined with Asahi on tap and sake at all price points, Kiraku offers a menu with broad scope and quirky appeal. Not everything works, but you’ll never get bored sampling items like New Zealand deer sashimi and roasted tea blancmanger. Besides, even the lesser items sparked impassioned conversation (possibly enhanced by the drinking).

A final word to the wise: Don’t lose track of your spending. Like at most izakayas, you’re meant to linger for several hours, alternating between drinks and food and doing your part for the collective din (Kiraku is not quiet). It’s relaxed and convivial, making it easy not to notice the financial hurt you’ve racked up by night’s end. Before you know it, you’ll be pounding budget Alfredo with the undergrads across the street.