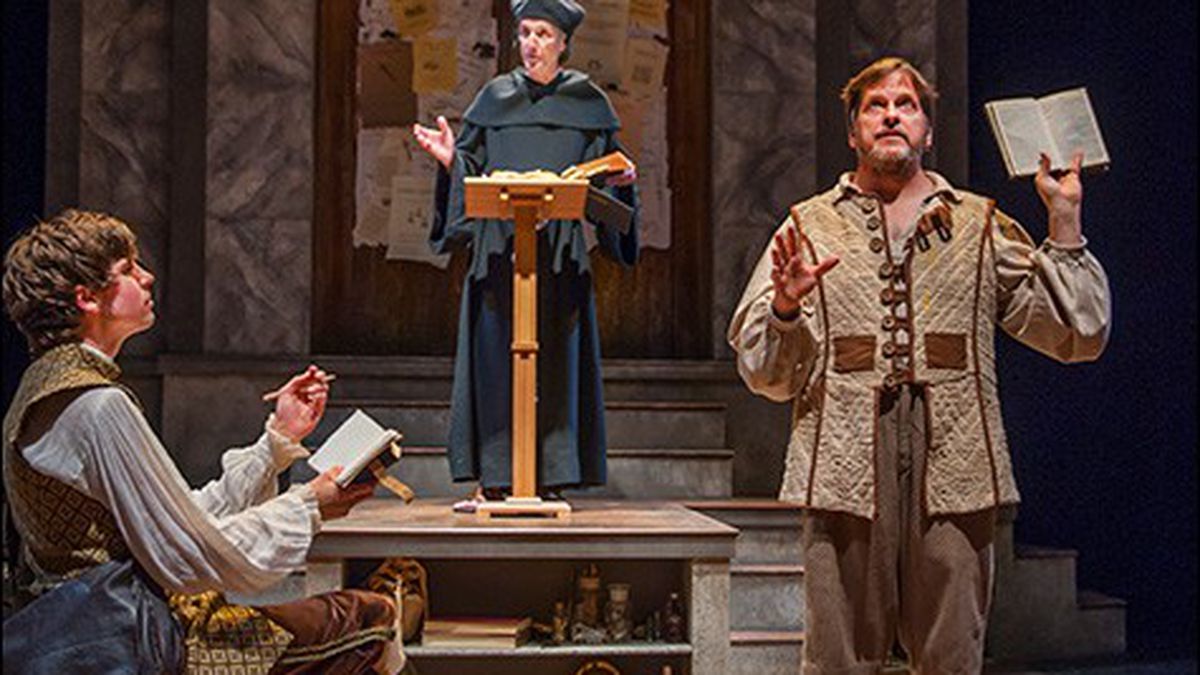 Come for the literary references, stay for the poop jokes.

Attentive Shakespeare readers know Wittenberg as the university Prince Hamlet was attending when he heard news of his father’s death. Others might know Wittenberg as the place where Martin Luther was a professor of theology, and where he nailed his 95 theses to the university’s chapel door, thus starting the Protestant Reformation. Still others might recall that the protagonist in Christopher Marlowe’s play Doctor Faustus was also a scholar at Wittenberg before he made his pact with the devil. Wittenberg the play, written by David Davalos and now in production for the first time in the Bay Area at Aurora Theatre Company, throws these well-known characters together, wondering how they might have informed each other’s lives and ideals — all with a generous dusting of poop and tenure jokes.

Hamlet (played with boyish WASPiness by Jeremy Kahn) is an angst-ridden senior and varsity athlete who has yet to declare a major. His philosophy teacher, Faustus (the animated, fervent Michael Stevenson), wants him on the side of reason, while his theology teacher, Martin Luther (the reserved yet impassioned Dan Hiatt), is steering Hamlet toward faith and the church. Interrupting the bro fest is the vivacious Elizabeth Carter, playing a smattering of female characters, including Faustus’ love interest, Helen. As Hamlet’s brilliant teachers duke it out, referencing both classical and contemporary influences like Aristotle, Freud, Goethe, and Timothy Leary, Hamlet seems content to play tennis and speak in riddling iambic pentameter in this ancient modern comedy of trial and errors.

For all its high-brow philosophizing and monologues about morality and free will, Wittenberg is also devilishly low-brow. One of the first scenes involves Faustus trying to help Luther with his constipation, which has been plaguing him for six days. “Even God created the universe in six days!” Faustus teases, and then prescribes him a laxative — the exotic liquor known as coffee. Apparently, the father of Protestantism did really suffer from constipation, and Davalos takes full advantage of bathroom humor whenever possible. As my companion for the evening put it, “Basically it’s weed and dick jokes disguised as Shakespeare.”

Despite its cleverness and puns about Copernicus (“How many poles does it take to make the world go ’round? Three: the North, the South, and Nikolai Kopernik”), the play can’t escape its limited plot. While certainly entertaining, Wittenberg is mostly a two-hour-long debate about reason and faith by two stubborn men. Aside from a few location changes, one delightful sex scene juxtaposed with a sermon on the Song of Solomon, and a tennis match between Hamlet and Laertes, the majority of the play is Luther and Faustus hashing out their dichotomous viewpoints over beer and wine. Thankfully, Stevenson is infinitely watchable as Faustus, with a buoyant effervescence and affable dudeness, reminding me at times of a hip stoner dad, complete with hoop earring and a cabinet full of mind-altering substances. He also sings and plays the lute at the local tavern, The Bunghole, swapping out lyrics to popular songs like “Que Sera, Sera” and Robert Palmer’s “Bad Case of Loving You.” Faustus is the prototypical Berkeley radical and Luther is his cautious, slightly more conservative friend. The play makes clear that they are friends, despite their barbs. And it could be said that they basically agree on many points. “You always go too far!” Luther yells. “And you don’t go far enough!” Faustus replies.

Director Josh Costello does his best to keep the play moving swiftly (although there is little action), and it helps that the heady philosophy dialogue requires sharp attention, because the humor comes a mile a minute and you don’t want to miss the next witty rejoinder. But for all its ample guffaws and literary tee-heeing, the play doesn’t offer much to ground the audience on the substance of what its leading men are debating. It turns out that “To be or not to be?” is not the question after all, so much as the punch line — as is the meaning of life, faith, love, sex, and ruling kingdoms. Which is fine — it’s a comedy, not a lecture — but all the joking did seem to get in the way of the play’s central struggle. In the end, as Davalos himself might joke, it’s all much ado about nothing.