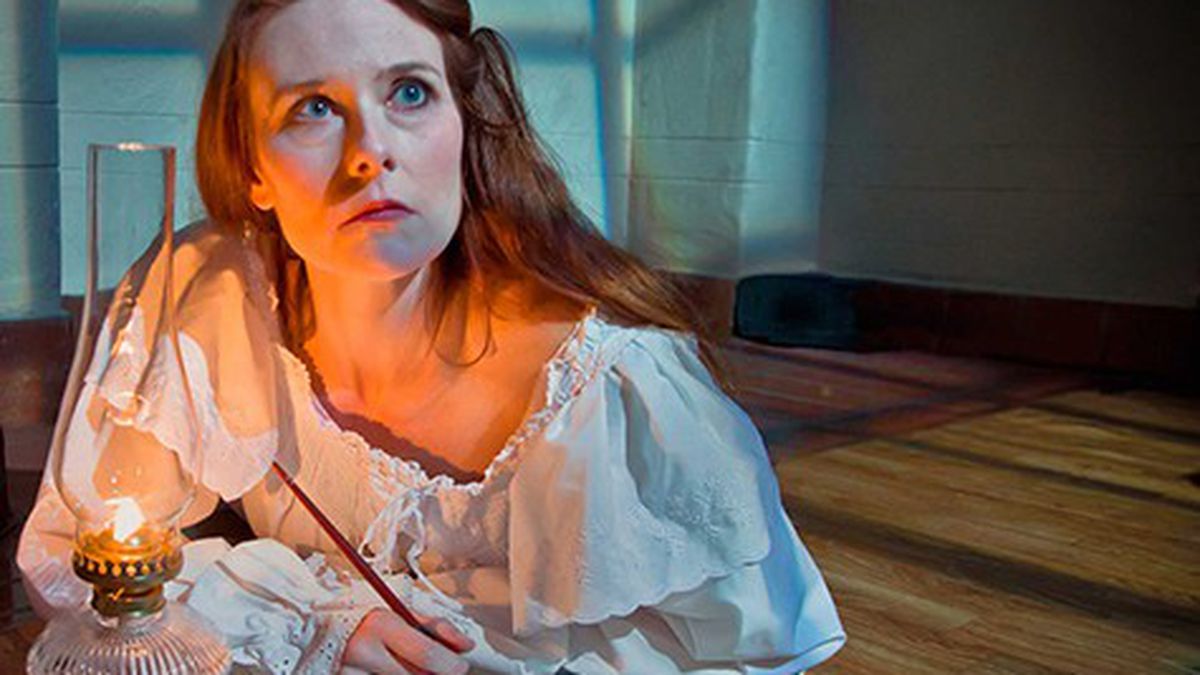 The Writhing on the Wall

The Yellow Wallpaper, a classic piece of feminist literature, is honored through adaptation at Berkeley City Club.

When Charlotte Perkins Gilman wrote The Yellow Wallpaper in 1892, she probably didn’t realize the impact her semi-autobiographical short story would have more than one hundred years later. It’s often credited as a masterpiece of feminist literature, and for good reason: the deceptively simple plot reveals the complexity of societal conditions for women in the 19th century.

The first-person narrative also makes for a visceral production in the latest one-woman-show by East Bay theater company Central Works, put on at the Berkeley City Club (2315 Durant Ave.). Like Gilman’s original writing, the play is told through the diary entries of a woman named Jane (played by Elena Wright), who, following the birth of her child, has found herself in the midst of what modern medicine would call post-partum depression. Her husband, a doctor named John, naively believes that the best remedy for Jane’s ailment is to keep her cloistered in an environment completely devoid of stimulation — a historically common treatment in the Victorian Era known as the “rest cure.” Sadly for the young couple (but mostly, sadly for Jane), this method of therapy means confinement to the attic bedroom of a colonial mansion — a bedroom bedecked with a peculiar yellow wallpaper.

In her constant downtime, Jane slowly becomes fascinated with the wallpaper’s pattern, reveling in the supposed “secrets” hidden beneath its yellow coloring. With no one but her condescending sister-in-law and husband to talk to, Jane’s writing becomes her only source of cathartic release. But when it is banned as part of her treatment, she gradually descends into full-blown madness.

Central Works playwright Gary Graves and director Jan Zvaifler mostly manage to realize the theatric potential within Gilman’s work. The chilling adaptation stays faithful to its source material, with the only deviations rendered necessary by the one-woman structure of the production. By cutting all supporting characters that appear in the original, the story comes to life in a way that emphasizes the isolation Gilman felt during her own bout with the rest cure. Wright stands alone, conveying the pitiable sense of forced infantilization that women experienced upon diagnosis of “hysteria” or a “nervous disorder.” The actress’ uninterrupted monologue renders her character’s psychosis even more emotionally convincing, aided by a suspenseful original score created by violinist Cybele D’Ambrosio.

It should be noted that Jane is an unreliable narrator if there ever was one, but the audience remains in her secluded corner from the time the play begins to the end of its seventy-minute run. Indeed, if it weren’t for the potent societal commentary embedded within, The Yellow Wallpaper could easily be considered a canon horror story, and (much to audience delight) Wright is fully cognizant of this. She contorts her body and facial expressions to match the deranged psyche of the woman she portrays, proving that she is fully capable of carrying the weighty role that remains symbolically relevant even to this day. Everything from the inflections in her shaky voice to her submissive demeanor is a tragic reminder that many women in the 19th century lacked independence and suffered greatly for it.

Patrons of the Berkeley City Club, where the production is currently being held, will recall that the theater venue is rather quaint. The architecture is ideal for the gothic thriller, and, at times, the lighting against the bare walls of the set begins to resemble the titular wallpaper. Stage manager Vanessa Ramos effectively takes advantage of this natural fit, adding scarcely more than a cast iron bed that tellingly resembles prison bars when Jane peers through them. Yet, there is a slight drawback to the otherwise apt space. Once the frightening climax comes around, the sparse setting renders it slightly muted. Wright is forced to mime some of the most dramatic moments of the story, and it leaves something to be desired. Luckily, that moment isn’t enough to mar the entire production. When the audience leaves the small theater, the story of the dreaded yellow wallpaper still hits home.