.The World Is Your Oyster 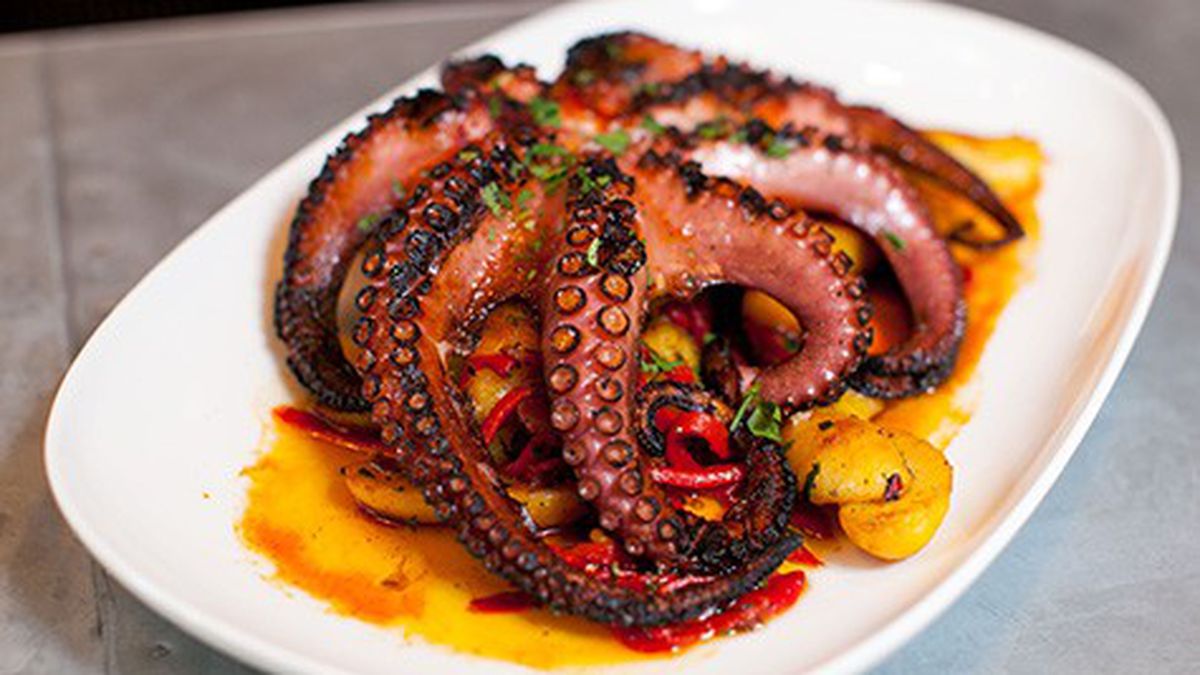 At Jack’s Oyster Bar & Fish House, the charred octopus comes out whole — suckers blackened, tentacles splayed out, and a big steak knife jutting out of its flesh as though a warning. It’s a dinner entrée, but it may as well be a crime scene or, more aptly, a statement of purpose: This isn’t your typical seafood shack.

Rick Hackett and Meredith Melville, who own Bocanova, opened Jack’s in a smaller, warehouse-y space that’s right next door to their flagship Latin fusion spot in Jack London Square. It is an oyster bar, of course, but more than that, it’s a restaurant that prides itself on the creativity and sustainability of its seafood offerings. (Though it isn’t dogmatic about sourcing locally, which means the octopus is shipped in from San Sebastian, and the oysters come from both coasts).

For many customers, though, it’s mainly a waterfront place to eat oysters on the half shell. The oysters come in an ice-filled metal bucket accompanied by the usual fixings: lemon wedges and a trio of sauces (a classic mignonette, a spicy cocktail sauce, and a habanero sauce that was tasty but too hot to pair with oysters). If you arrive before 6 p.m., you’ll find it hard to pass up on the $1.50 oyster of the day. During one visit, these were Skookums from Puget Sound — soft and creamy, with plenty of briny liquor.

Otherwise, the daily-changing oyster menu offers about ten different varieties to choose from, which is a rare luxury in the East Bay. Aside from the discounted special, though, you’re paying $3 to $4 an oyster — Zuni Cafe prices, but with more casual service and in not nearly as grand a setting.

The umbrella-and-picnic-table-festooned patio bleeds into its sister restaurant’s, and, design-wise, the place feels a bit like a blandly maritime-themed Bocanova annex. The servers were friendly, but not well-versed enough with the menu to give more than cursory descriptions. Their uniform — a plaid shirt tucked into jeans — lent a kind of country-western feel to the proceedings.

All of which to say: Jack’s is more casual than its prices would indicate. Some customers may balk at dropping $40 or $50 just on oysters at a restaurant that isn’t set up to be a special-occasion place.

But the food is nothing if not ambitious. Both chefs worked in high-end Peruvian seafood restaurants, so the kampachi tiradito, a Peruvian-Japanese raw fish dish, is right in their wheelhouse. Thin strips of kampachi loin and small chunks of the fish’s belly are marinated in a citrusy yuzukosho (Japanese chili paste) broth, tossed with trout roe, and piled prettily atop avocado cream sauce. Chili-infused rice crackers made for tasty, toasty scooping utensils — but the inclusion of only two of them felt awfully ungenerous.

For those who were inspired by the Express’ recent roundup of decadent French fry dishes, the lobster poutine is a must-order: Thick-cut fries topped with big chunks of lobster and smoky bacon, everything drenched in a rich mornay sauce (a cheesy béchamel, basically) that stands in for the Québécois’ traditional gravy and cheese curds. A scattering of smoky, delicate bonito flakes on top notwithstanding, it isn’t exactly a subtle dish. But I couldn’t stop eating it.

Sometimes the kitchen’s impulse to reinvent the classic-seafood wheel backfires. A Korean-inflected take on batter-fried soft-shell crab was uncommonly juicy and loaded with pungent, greenish-gold crab “fat” — a rarely offered delicacy at more button-down seafood restaurants. I liked the long, fibrous stalks of just-fiery-enough leek kimchi, but a vinegary black-garlic sauce took things a step too far: It was so sour that it overwhelmed the palate.

And does the world really need a fine-dining version of a lobster roll? At Jack’s, the lobster-roll sliders (which come three to an order) are a play on the Connecticut style, wherein the lobster is served warm with drawn butter. But the chefs fiddle with every component: The lobster is cooked “medium-rare,” which is to say still slightly raw (though not unpleasantly so). Instead of plain butter, the lobster meat is blanketed with a thick and buttery hollandaise. And shiny, well-salted pretzel buns replace the butter-toasted, split-top hot dog bun that any New England lobsterman will tell you is an essential part of the sandwich.

The end result was tasty enough, but not exactly an improvement on the original. In particular, the crunchy-exteriored buns — perfectly enjoyable by themselves — were too chewy in this context, and made for way too much bread, so that the sweet lobster meat wound up getting lost in the shuffle.

Despite the in-your-face presentation of the aforementioned charred octopus, it turned out to be one of the restaurant’s more rustic dishes. That said, while I enjoyed the cephalopod’s meaty texture, the burnt flavor was a bit overwhelming, and, frankly, it was a lot of octopus to eat. A bed of roasted sweet piquillo peppers underneath offered a nice contrast, but some more acidity — a lemon wedge even — would have helped. A half order ($22) was plenty for two.

When you’re working with good seafood, a little restraint goes a long way. The best dishes at Jack’s were clean-tasting and comparatively simple. The raw oysters, of course. The clam chowder — one of the best I’ve had in recent memory — featured a heady, full-flavored broth that was creamy without being gloppy, along with plump, tender clams and cubes of Nueske bacon. The buttery, crisp-edged oyster dressing came in a little cast iron skillet and was better, by a wide margin, than what passes for Thanksgiving stuffing in most households.

If you’ve saved enough stomach space, the dessert to get is the brown butter cinnamon croissant bread pudding. I loved how the crisp pastry (a cinnamon roll, basically) stood up to the pool of soft, oozy custard, which reminded me of the innards of a still-warm Chinese egg tart — just enough of a creative flourish to make the dish memorable, but not so much as to render it unrecognizable.

Next ArticleMid-Week Menu: Tacos and Sushi on Piedmont Avenue, Haggis in Glenview