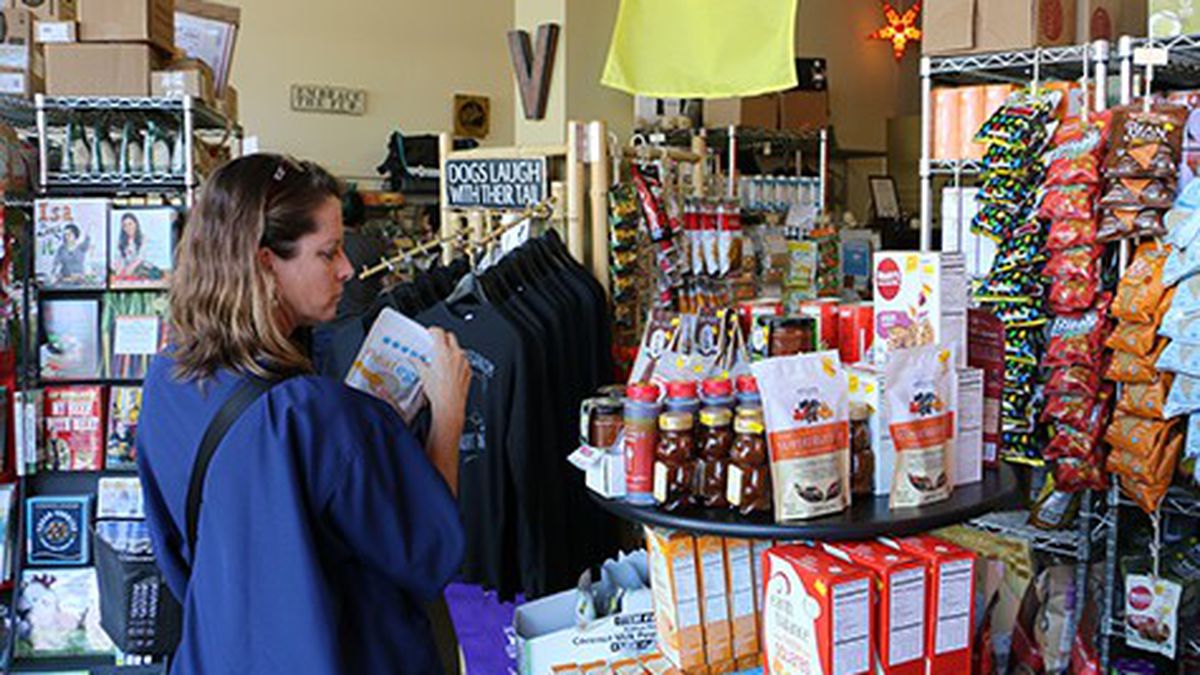 Using only plant-based ingredients, vegan chefs are whipping up some of the most creative food in the East Bay.

When Joe Haptas opened his first vegan grocery store in Seattle ten years ago, he didn’t know what to put on the shelves. When he opened Republic of V in Berkeley (1624 University Ave.) with his partner Noelle Callahan a little more than a year ago, however, he had the opposite problem. “We exceeded our expectations,” said Haptas, who has been vegan since 1995. The store, the only one of its kind in the Bay Area (and one of only nine vegan grocery stores nationwide), is home to a plethora of vegan products, many made locally.

“There’s been a vegan cheese explosion,” said Haptas, touting a product lineup that includes foods from Fairfax-based Miyoko’s Kitchen. “People used to say, ‘I believe what you’re saying but I could never give up cheese.’ It gives me hope that there are so many amazing cheeses out there now,” said Haptas, whose philosophy revolves around promoting “the foods that are winning hearts, minds, and stomachs.” Republic of V is only one of a new wave of businesses in the East Bay that are redefining what it means to be vegan. Gone are the days of bland soy products. Eating vegan in 2015 is all about luscious cashew cheeses and farm-to-table, vegetable-centric fare.

Until late February, one of Republic of V’s best sellers was Fromagerie Esseme’s nut-based vegan cream cheeses, which have also been hits at Rainbow Grocery and Sacred Wheel Cheese Shop. Produced by catering team Shane Stanbridge and Marie Chia, who go by S+M Vegan Chefs, Fromagerie Esseme’s vegan cheeses were so popular that Stanbridge and Chia could not keep up with production. “Catering and pop-ups make more sense to us as cooks,” said Stanbridge. With Fromagerie Esseme on hiatus, Stanbridge and Chia are keeping busy with pop-ups, including their collaboration with Oakland-based Baia Pasta, which brings Stanbridge and Chia’s popular $6 mac ‘n’ cheese to the Jack London farmers market every first Sunday, and their multicourse, seasonally inspired, $50-a-head Blind Tiger dinners with Berkeley’s organic Bison Brewery.

The collaborative ethos behind S+M stems from both a supportive vegan community and the creative energy of the East Bay. “There’s a solidarity between young Oakland businesses,” said Chia. We just all want to build a more exciting Oakland.” In addition to the community, there’s the food — fresh California produce makes it easier: “It doesn’t take a lot to make a good vegan meal here,” said Chia. The presence of other vegan foodmakers, such as Oakland-based Rhizocali Tempeh and Hodo Soy, allows Chia and Stanbridge to cook with fresh, quality protein, and with each successful vegan business, others follow suit. “Just seeing [food truck] Hella Vegan Eats doing pop-ups showed us that it was possible,” said Chia of her inspiration to start popping up.

“We definitely wanted to be in the East Bay,” said Haptas of Republic of V. “There are a lot of young, passionate people here,” and rent is still affordable enough for a niche business like a vegan grocery store to survive. Stanbridge echoed this: “You can offer the same kinds of things you would offer in the city at a much better price.” Millennium, a high-end vegan restaurant in San Francisco, launched a Kickstarter to finance its move to Oakland. As of March 18, it has already raised $82,403, surpassing the original $50,000 goal.

Clearly East Bay eaters want more vegan restaurants — and are willing to pay. “A lot of people are worried that it’s not going to be elegant,” said Chia, who thinks that “what has been really helping vegan food is that a lot of omnivore chefs, even the old school French chefs, have been cooking more with vegetables, and that has inspired vegans to cook the vegetables for what they are instead of just constantly looking for substitutes.”

With S+M’s delicate and creative dishes (such as a recent take on gnocchi, which included pink peppercorn and orange blossom savory cream, sumac-roasted broccolini and pistachio gremolata), it’s no wonder Stanbridge and Chia’s dinners are popular with vegans and omnivores alike.

“We try to show people that a vegan diet can be just as satisfying as an omnivore diet. That’s our main form of activism,” said Stanbridge. The lack of animal products forces vegan chefs to get creative. Chia, who taught herself how to cook after being faced with a dearth of vegan options in her hometown of Paris, said: “The vegan scene is still pretty new, so unlike omnivore chefs who have been doing this forever, chances are if you’re making something [as a vegan chef], you’re the first one.”