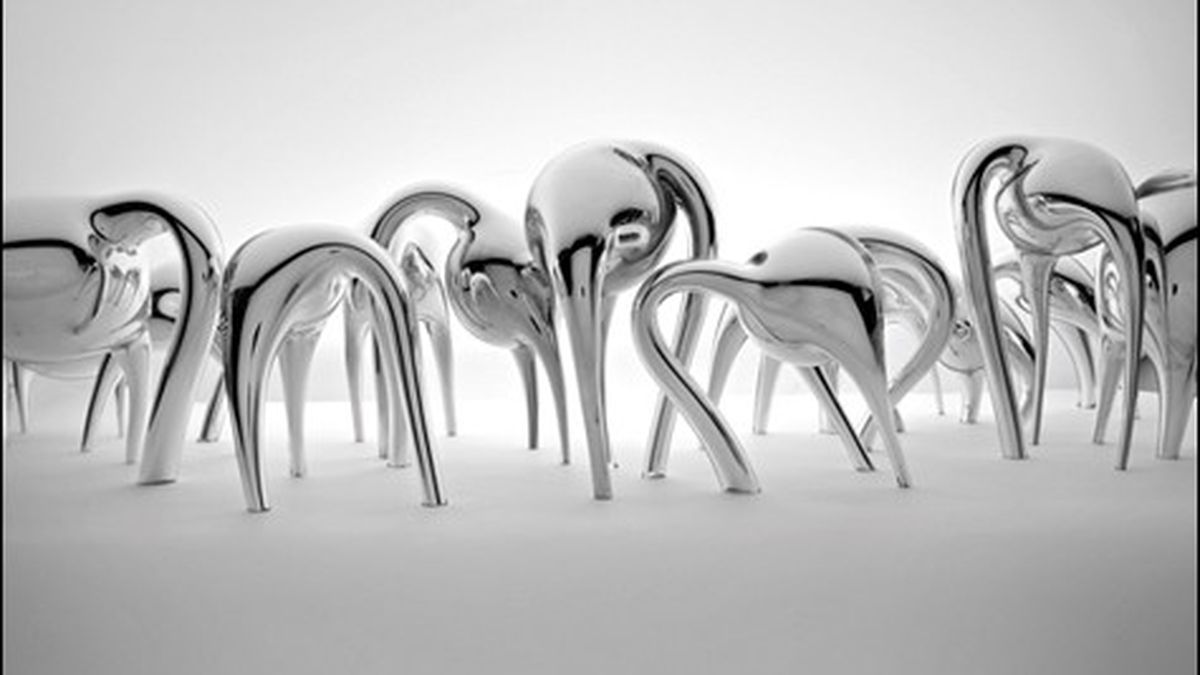 The Unusual Creatures of Alex Abajian and Jerry Lin-Hsien Kung

Their glass-blowing technique involves coordination and a great deal of trust.

For the past four or so years, Alex Abajian and Jerry Lin-Hsien Kung have been making “creatures” — tripodal formations of bended glass, typically coated in a mirror finish. In isolation, one of these creatures might appear a merely decorative object — a chic, sensuous addition to a posh lobby or some such space. However, Abajian and Kung have no interest in delivering their creations to such a fate.

To thwart such a banal reading, the duo crowds the creatures in a runway installation, wherein they become a reflective, mercurial melee of limbs and curves, capturing viewers’ reflections and enlivening one another. “They naturally want to go together in certain ways,” said Abajian. “Like one will be pushing and the other will be pulling. They nestle into these groups and you see it looks like a group of people, how people actually congregate.”

With a $40,000 grant from the Tacoma Museum of Glass, Abajian and Kung were able to create quite a sizable congregation. This also makes the exhibition, Creatures, now at Vessel Gallery, one of the most expensive in the history of Oakland’s gallery scene.

But it’s not exactly clear how someone seeking art should approach these objects. One thing is sure: They are not like conventional sculptures, where the art is in some sense encapsulated in the finished form. Rather, Abajian and Kung’s art is in the process.

The artists have been collaborating since they were students at the Rhode Island School of Design. They have a seemingly inexhaustible supply of shared stories, and even possess matching cranial scars (each the result of a serious injury; neither glass blowing-related). Together, they pursued the craft end of glass-making for a while, but soon started drifting toward something else — a more playful, organic process free of rigid expectations.

Their approach — unique in the heavily traditional world of glass-blowing — involves a serious amount of coordination and a great deal of trust. Basically, Kung pours hot glass from above, blowing into it to control its melt, while Abajian, below, negotiates with gravity to influence the glass’ form, using rods to pulls out “legs” and arching “trunks” before the material freezes up. It is a play with the most basic of physical constraints: time, space, and gravity.

Many of the resulting creatures wind up in a broken heap (“the graveyard,” as it is known), but no matter; the physical object here is mostly an indexical one, pointing to the art more than constituting it — something like abstract expressionist gestural smears. “It’s kind of a physical snapshot, where the glass is recording our movements,” said Kung. “It’s about one person’s breath and the movement of two people, physically moving like a marionette.”

Indeed, more than sculpture, this is dance.

Green Room’s Triumph of the Swill