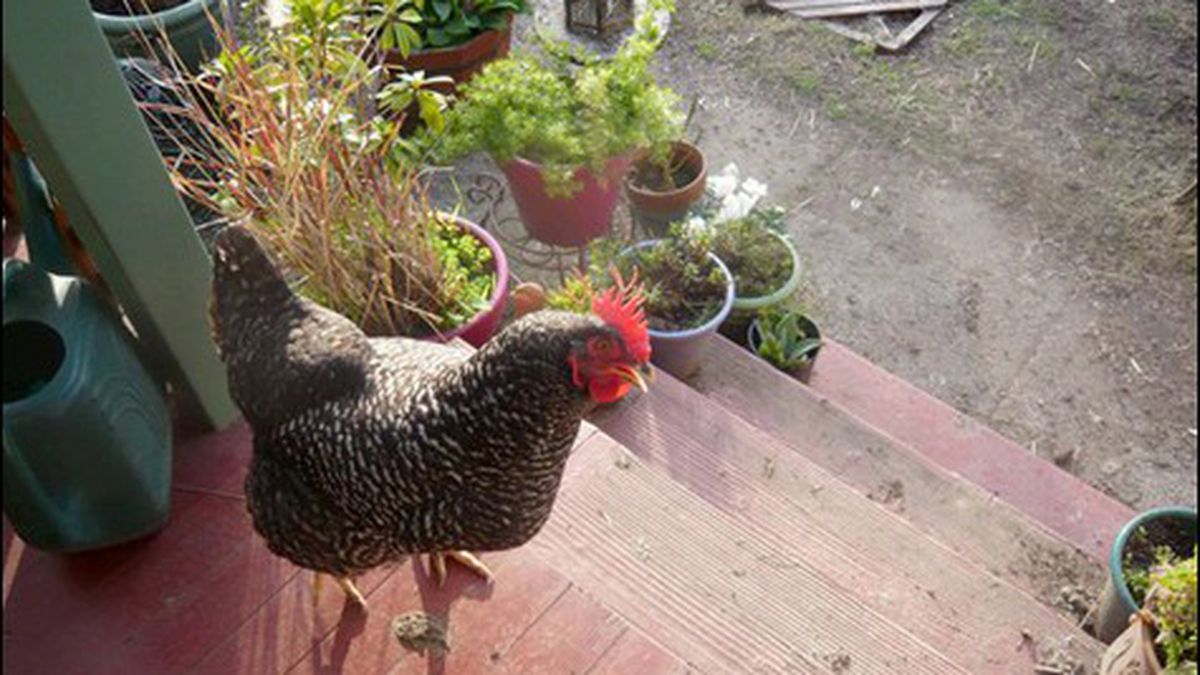 Hop on your bike and check out chicks at the Alameda Backyard Chicken Coop Bicycle Tour.

According to the 2010 US Census, the City of Alameda is home to nearly 74,000 people. And, according to a 2012 census taken by members of the Alameda Backyard Chickens Yahoo discussion group, it’s also home to at least 350 backyard chickens. This means that at this very moment there are hundreds of domestic fowl (primarily hens, as roosters tend to have no regard for noise ordinances) clucking and pecking about the backyards of various residences on the East Bay island. What the census also indicates is that there are more than a handful of Alameda residents willing to clean up a lot of bird poop in the name of fresh eggs, feathered companionship, and maybe even a farm-fresh chicken dinner.

There are plenty of reasons why, in urban environments, these typically agrarian animals are relegated to small backyards. If left to roam they’d not only scatter their bird byproducts widely but also make quick work of many a landscaped front yard. Beyond that, city-dwelling chickens are susceptible to wild predators like raccoons, possums, and the occasional stalwart rat — making backyard chicken coops an essential part of keeping the birds.

“You absolutely have to have a coop,” explained Alameda resident Jacqueline Cooper, a member of the aforementioned online discussion group and the owner of six hens, which she keeps for their eggs and for the sheer enjoyment she gets from watching the birds lurch about. “Raccoons are the main problem, because they will absolutely wipe out your flock at night. So when the sun goes down you really need a safe, enclosed space for the flock to be.”

Considering the number of coops required to house and safeguard Alameda’s chicken population, it’s inevitable they’d come in a wide range of shapes and styles. Cooper’s first was a makeshift structure built atop a San Francisco warehouse, and she now has a fairly large enclosure in her backyard surrounded by wiring, complete with a cozy place for her birds to roost. Compared to the coops of some Alamedans, however, it’s still a modest design. Cooper said she knows of one Alameda coop that’s decked out in a tiki theme; another has computer-operated doors.

While such backyard Shangri-Las are typically hidden from the public eye, Cooper and fourteen other Alameda chicken owners will open up their yards on Sunday, May 6, for the third-annual Alameda Backyard Chicken Coop Bicycle Tour, during which coop-curious cyclists can view the urban agriculturalists’ various setups and ask questions about raising chickens and installing coops of their own. At some residences, participants can also learn about keeping bees and vegetable plots. Co-organized by a loose consortium of local chicken owners, including Cooper, and BikeAlameda, the self-guided tour is designed to be both educational and recreational (while it isn’t required, bicycling or walking the relatively flat two-and-a-half-mile route is encouraged). A map of the free tour, which runs strictly from 1-4 p.m., can be downloaded via smartphone or computer at Goo.gl/29sCV, or picked up at Alameda Natural Grocery (1650 Park St.). Call Cooper at 510-881-6974 for more information.