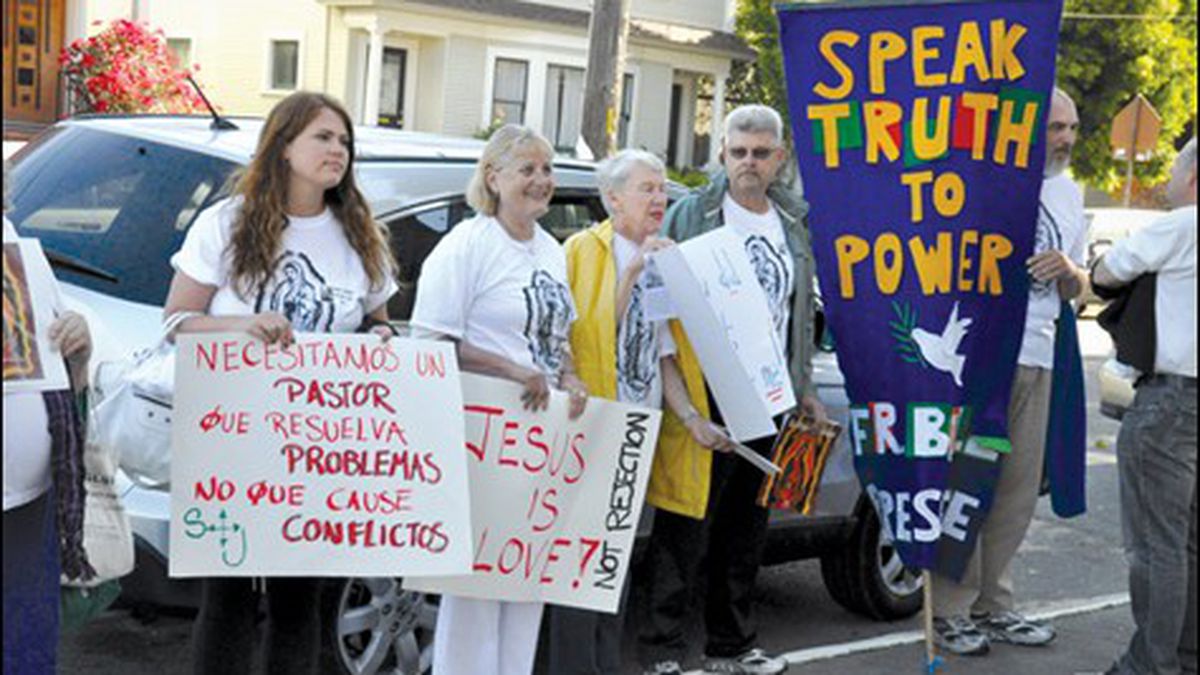 The Struggle for Berkeley’s Soul

Progressive congregants at an iconic catholic church are unhappy with its new conservative leadership.

For decades, St. Joseph the Worker Catholic Church in Berkeley was a liberal icon. Father Bill O’Donnell provided sanctuary at the church for Cesar Chavez when he was receiving death threats, joined picket lines to support underpaid hotel workers, and got arrested for protesting against apartheid in South Africa. O’Donnell’s successors, Fathers George Crespin and Stephan Kappler, carried on the social justice traditions he established.

But these days, St. Joseph the Worker has become a symbol of a different struggle. Some church members say the venerable house of worship is now a battleground in an ideological fight within the Catholic Church between the adherents of liberation theology and an increasingly conservative church hierarchy.

The battle for the soul of Berkeley’s most famous Catholic church began two years ago when Salvatore J. Cordileone, the newly appointed bishop of Oakland, installed Father John Direen at St. Joseph. Cordileone, who had been appointed by the conservative Pope Benedict XVI, Joseph Ratzinger, was one of the driving forces behind Proposition 8, the anti-gay-marriage law. By contrast, Kappler, the pastor directly before Direen at St. Joseph’s, contributed $500 in opposition to Prop 8.

Direen is cut from a more conservative cloth than his predecessors at St. Joseph’s, and in the two years since taking over the church, has wrested control from the democratically minded congregation. Before Direen’s appointment, St. Joseph provided “the kind of environment where you have old school conservative Catholics worshipping alongside people who are pro-choice,” but that’s changed, said Aurora Meerjans, former head of the parish council.

St. Joseph’s congregation, consequently, is now in revolt. They’re asking Cordileone to replace their pastor and criticize Direen for shutting down congregant committees — the Parish Council, the Conseyo Latino, and the Social Justice Committee — that once were the heart of the church community. They also say that Direen’s lack of Spanish-speaking skills has left him unable to communicate effectively with the church’s large Latino community; and they condemn his move to oust retired pastor Crespin.

Two years of growing discontent with Direen exploded Sunday, June 19. Sporting white T-shirts that read in English and Spanish “St. Joseph the Worker: It is Our Church,” and bearing stickers with the images of O’Donnell and Chavez, more than one hundred parishioners stood outside the 133-year-old West Berkeley edifice where Cordileone was visiting, calling on him to remove Direen. Their hand-made signs read: “Necesitamos un pastor que resuelva problemas, noque cause conlictos,” and “Our voice counts, too.” A tall blue banner read: “Speak truth to power: Father Bill Presente.”

Berkeley’s progressive community also joined a letter-writing campaign to get Cordileone’s attention. More than 250 people wrote the bishop, including Mayor Tom Bates, whose letter read: “… the parish has provided invaluable leadership in city affairs, giving voice to underrepresented groups. … This important voice, which our whole community has relied upon, has been silent over the last two years. We want — indeed, our city needs — the continued level of engagement that St. Joseph the Worker parish has provided in the past.”

Cordileone finally agreed to a meeting with Direen’s critics on the eve of the protest. Meerjans, who helped organize the demonstration, attended the meeting with the bishop and said she thought he “was very sincere in listening to our concerns about maintaining this parish community and is considering what we are asking for, which is new leadership.”

Oakland Diocese spokesman Mike Brown said the meeting was just a start. “They left it open,” he said. “The bishop is willing to continue the dialogue.”

The church tension is being replayed in other progressive communities. “This is a microcosm at St Joseph’s,” said Liz Fuentes, another protest organizer. “What’s happening now on a small scale right here at St. Joseph is the struggle between liberation theology — the open church — and the autocratic closed church.”

Conservative ideology has intensified in the Catholic Church in the decades since Vatican II, a period of openness and reform in the early-Sixties. Church members and observers note that increasingly conservative popes have appointed conservative bishops, who, in turn, name conservative pastors. Conservatism then sparks conflict in liberal congregations like St. Joseph’s, particularly over ideology, such as abortion. Meerjans said before Direen’s arrival, St. Joseph’s pastors stressed the need for healing after abortions. Now, there’s “a less open and welcoming environment,” she said. “I’ve had parishioners come to me and tell me they’re leaving because of the anti-abortion things that are said from the pulpit.”

Disagreements over questions of abortion, gay rights, the role of women in the church, are nothing new to St. Joseph and other parishes, but Fuentes said that under Direen dialogue is not permitted. “The fact that there’s disagreements in the church, we all know that,” Fuentes said. “That’s always true. But when those disagreements are shut down, and only one side is allowed to function inside the church, that’s what we’re protesting against.”

The diocese, however, is downplaying the liberal-versus-conservative battle at St. Joseph’s. Spokesman Brown said that the friction over Direen has to do with a new person coming into a church and doing things differently.

But those calling for a new pastor say the changes Direen made are significant. First, he turned the community room, where the church committees and community groups such as Berkeley Congregations Organizing for Action met, into a gift shop. Then, Meerjans said Direen told the councils that they couldn’t meet without him; and he didn’t show up to meetings, thereby effectively shutting them down.

Brown countered that Direen created the gift shop not to discourage community meetings but to boost the church’s failing finances.

But the ultimatum that Father Crespin must leave the parish this month was the final act that sparked the June 19 protest, Fuentes said. Crespin has lived in the parish for some thirty years, much of that time serving as an administrator with the diocese before becoming pastor. Although he retired in 2005, Crespin continued to say mass, perform weddings, baptisms, funerals and quinceañeras. “Father George [Crespin] is and has been a very beloved and esteemed, well-respected spiritual counselor to the entire community,” Fuentes said. “He was summarily asked to move out. And I think people have been worried about this for two years since Father John [Direen] started, but had waited and hoped he’d come into line with what the community process is. And so people kind of held off until this happened.”

Brown said that “It’s difficult to have two pastors,” especially because Direen and Crespin “did not see eye to eye.” Direen is in charge and has the authority to ask Crespin to move; he gave him time to do it and offered assistance finding new living quarters, Brown said. But the priest stayed and therefore was finally told to leave the parish by the end of June.

However, there’s also the issue of Direen’s competence in Spanish. “St Joseph’s is used to having either Father Crespin, or before him, Father O’Donnell, who would speak to the people,” Fuentes said. “They were very present. The connection was very real. Father John [Direen] gets up there and reads something [in Spanish].”

The issue is more than knowledge of Spanish; it’s a question of being in step with the particular concerns of the Spanish-speaking community, Fuentes said. “The priests before have all been involved in the immigration struggle, in the struggle for better health care, improving the schools, closing the achievement gap very much affects the Latino community. … It’s not just the language, but the lack of willingness to communicate with the community.”

This Is How We Roll