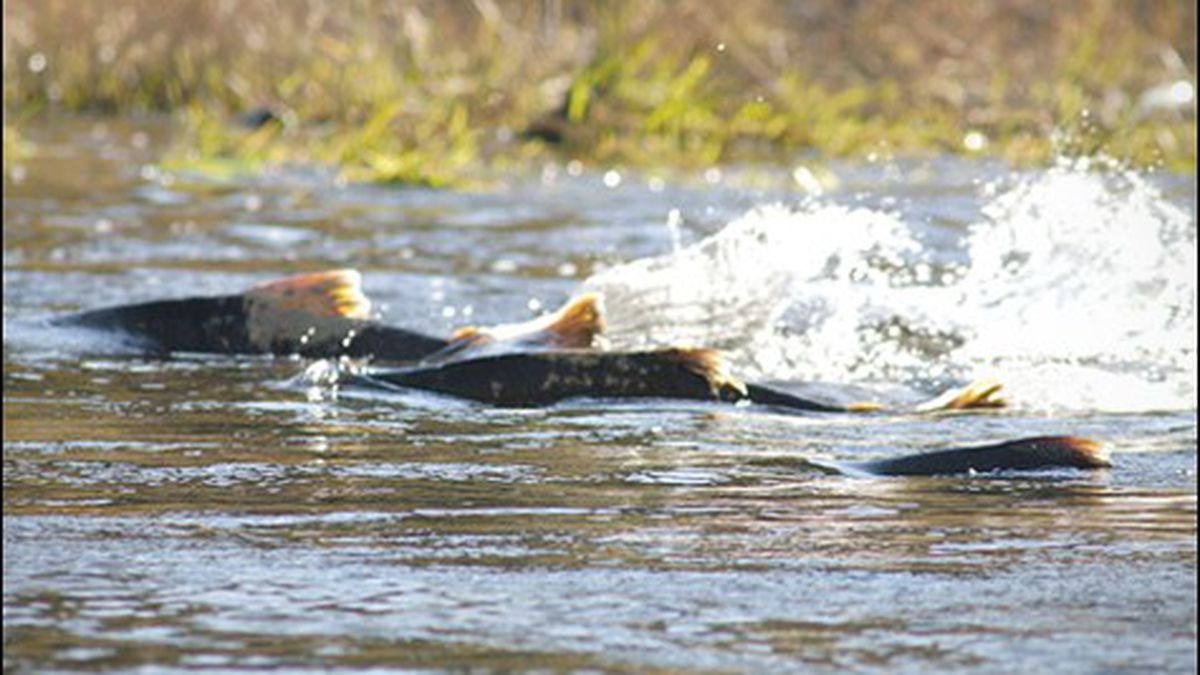 The Salmon and Water War

Some salmon fishermen contend that state agribusiness is trying to put them out of business in order to get more water.

San Joaquin Valley irrigation districts, who filed a lawsuit this month to stop California’s commercial salmon fishing season just five days after it began, say they’re worried that fishing will harm the state’s salmon populations, which have been struggling for several years. But the main motive behind the suit filed on May 5 against the federal government is not about the health of salmon runs; it’s about water.

The suit contends that if numbers of Chinook, or king, salmon abruptly drop, federal regulators could react by curtailing farmers’ access to Sacramento River water, which the fish require for spawning. Already, the irrigation districts say, the spring run of Chinook salmon is listed as threatened. “And if the run gets listed [as endangered], then we’ll have to give up more water,” said Allen Short, coordinator of the San Joaquin River Group Authority, the alliance of 22 water management agencies pressing the lawsuit. The irrigation districts supply water to the state’s major agribusinesses in the southern Central Valley.

Some fishermen suspect that the irrigation districts’ true aim is to eliminate the California salmon fishing industry in order to protect their water allotments. “We’re a thorn in their side, and as long as we’re around, the water guys will want us gone,” said Berkeley commercial fisherman Mike Hudson.

Victor Gonella, president of the Golden Gate Salmon Association, also wonders if California’s agriculture industry is pushing a campaign to rid the state of fishermen. “Because if the commercial salmon fishery collapses,” he noted, “then it opens more latitude for them [the irrigation districts] to pump more water.”

Zeke Grader, executive director of the Pacific Coast Federation of Fishermen’s Associations, said that the real culprit in the decline of salmon are the delta pumps that send water to the San Joaquin Valley irrigation districts — not California’s fishing industry. “If they really are concerned about protecting fish,” he said, the irrigation districts “should look at the state and federal pumps in the delta and those that receive water from them.”

Chinook salmon numbers began to plummet about five years ago after water pumping rates in the Sacramento-San Joaquin River Delta hit all-time record highs between 2003 and 2006. After a record spawning run in 2002 of almost 800,000 fish, the fall run of Chinook salmon crashed, and in 2009 bottomed out at 39,000, the lowest return ever recorded.

National Marine Fisheries Service research biologist Michael O’Farrell said that overfishing of salmon did not cause the crash and has rarely, if ever, been a problem. Rather, experts generally blame the collapse of the Chinook salmon on the poor condition of the delta, where pollution, nonnative predators, and — especially — water diversions via two large pumps in the southern delta have created a hostile environment for many fishes.

Now, salmon numbers seem to be on the rebound. Last fall’s return of spawning adults to the Sacramento River was up fourfold from 2009’s low, and the number of salmon in ocean waters is believed to be nearly one million. Hudson contends that environmental regulations that began restricting water pumping from the delta in 2009 to protect endangered fishes, high rainfall, and improved salmon hatchery programs are to thank for the turnaround.

Short and the irrigation districts, however, argue that the salmon are back due in part to fishing season closures in 2008 and 2009 and a partial closure last year. “After banning fishing,” he said, “we saw a return in the salmon population like we haven’t seen in years.”

Short wants to see fishing closed for at least another season — a move Hudson said would be not only unnecessary but economically devastating. “Everybody in the [salmon fishing] fleet is flat broke now after three years of no fishing,” he said, adding that many have borrowed money to maintain or repair their boats and are now banking on a profitable salmon season. “If this season got shut down now, it would be a hit that a lot of guys couldn’t recover from.”

Although wild salmon remain in the Sacramento River ecosystem, those of the San Joaquin went extinct six decades ago. According to Peter Moyle, a UC Davis fishery biologist, the San Joaquin once boasted a half-million spawning fish a year. But the construction of the Friant Dam in the 1940s, which sent 95 percent of the river’s water to fields and orchards to the south and west, completely eradicated the fish.

Today, the San Joaquin River system’s salmon populations consist of just several hundred to several thousand spawning fish that return each year to the river’s three lower tributaries — the Stanislaus, the Tuolumne, and Merced rivers. For six decades, the main branch of the San Joaquin has borne no salmon at all.

But that is scheduled to change. In the 1990s, legal skirmishes between conservationists and water users resulted in focused efforts to restore the San Joaquin’s lost salmon runs. A 2004 court settlement even determined that operation of the Friant Dam violates the state’s Fish and Game Code, which states that “[t]he owner of any dam shall allow sufficient water to pass over, around or through the dam, to keep in good condition any fish that may be planted or exist below the dam.”

Moyle said that fertilized eggs from Sacramento salmon will soon be planted in the San Joaquin with the hope of seeding a new population — but certain conditions will be required to assure that these salmon can spawn and their progeny live. To this end, the San Joaquin River Agreement, enacted in 1999, mandates that the region’s water districts maintain minimum river flow rates to facilitate the return of spawning fish, which Moyle says could someday number, at best, five to ten thousand.

Short says his group of water agencies is doing its best to bring back the salmon — but the commercial salmon season, which opened May 1, is not helping. “We’re required to increase spawning returns and increase the salmon population, but we can’t increase fish numbers if our salmon go out to sea and can’t get back again,” Short argued.

Zeke Grader, however, calls the contentions of the irrigation districts “audacious.” He said that the water agencies now suing the government have been protected by senior water rights from recently imposed restrictions on delta water pumping. “There has been no cooperative effort on their part to restore the runs,” Grader said. “They’ve been brought along kicking and screaming. They haven’t sacrificed any water, and they caused the declines” in salmon numbers.

Dick Pool, president of the Concord-based conservation group Water4Fish, is mystified by the suit, which names the US Commerce Department and the National Marine Fisheries Service as defendants. Like Grader, Pool observes that the water agencies now suing the government are well buffered from imminent harm from water pumping restrictions. “It just looks like they’re suing out of spite,” he said.

But Short vouched for the logic behind the lawsuit. He noted in an e-mail that the state and federal agencies “authorizing significant commercial salmon harvest this year … are the same agencies that caused a shutdown of the pumps in the delta to, in part, protect spring- and winter-run salmon.” He says that the affected pumps transport domestic water to 25 million Californians and that “shutting down the pumps” at certain times of the year to minimize fish mortality has had heavy economic impacts in farming communities.

However, Pool warns that closing fishing seasons won’t restore salmon runs. For salmon populations to return, he said, more water must be allowed to flow down the Sacramento and San Joaquin rivers. If the flows are inadequate, then the Endangered Species Act will kick in, he said, affecting farmers and fishermen alike. “The way I see it, if the salmon get listed [as endangered], we’re all in deep trouble.”