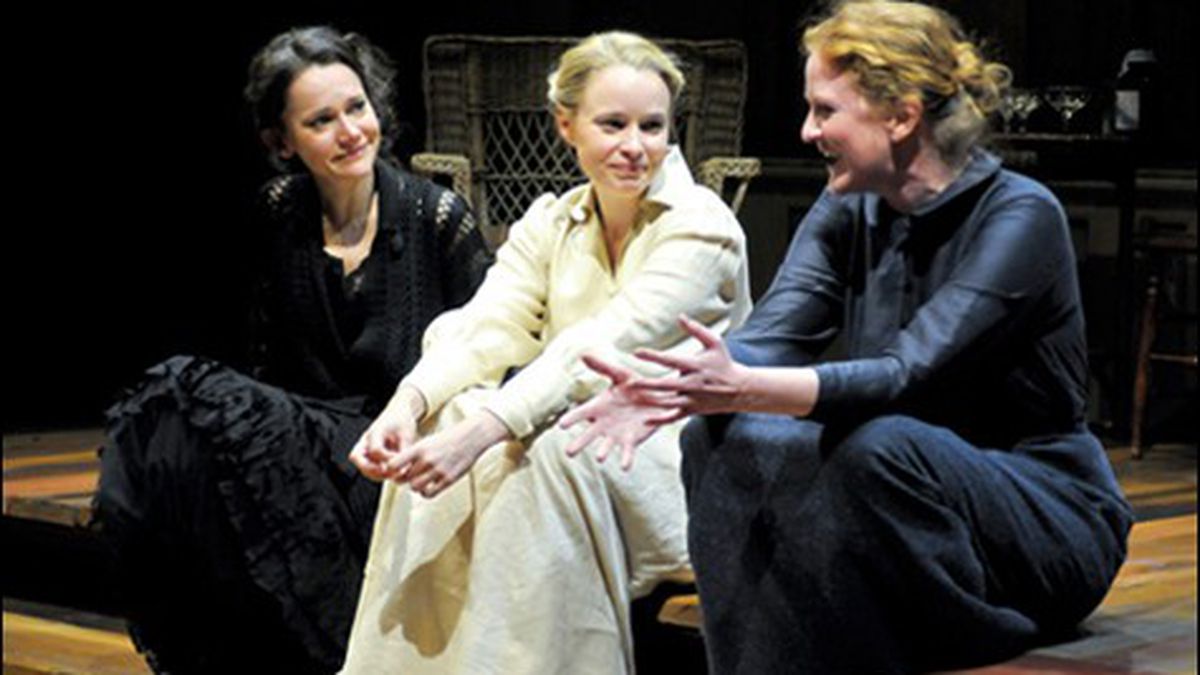 The Russianness of Sarah Ruhl

A contemporary American playwright adapts herself to Chekhov.

Perhaps the most surprising thing about Sarah Ruhl‘s adaptation of Chekhov’s Three Sisters is how little she actually adapts. Working off a translation by Elise Thoron, Ruhl endeavored to make the language a little less mannered, and to inject some extra winking symbolism that helps amplify themes of stasis and disempowerment. But she also hewed to the original script as much as possible, keeping all the plot points, retaining the stage directions, and even borrowing some old Russian phrasings. Ruhl wrote in the program notes that vsyo ravno is a much more exacting proverb than the rough English translation, “It’s all the same.”

Thus, anyone expecting a modern, arty, ultra-complex, hyper-updated Three Sisters might be cruelly disappointed. But that’s probably a small portion of the audience at Berkeley Rep, where the play runs through May 22. Surely, most theater-goers will be pleased to find that the differences between Ruhl and Chekhov get less traction than the similarities.

In this version, the three sisters — Olga (Wendy Rich Stetson), Masha (Natalia Payne), and Irina (Heather Wood) — become ciphers, rather than malleable, developing characters. Olga is the old, dowdy schoolteacher and committed spinster. Masha is the tetchy, sullen romantic. Irina is the young, hopeful seeker who dreams of going to Moscow, which is to say, she longs to be somewhere urban and sophisticated. In Ruhl’s play that dream is constantly being dashed, which is a handy way of showing that in early-20th-century Russia, predestination seemed to always trump free will. Costume designer Ilona Somogyi and director Les Waters chose to represent that conflict literally — maybe too literally — by having each sister wear one color throughout the play. Naturally, Olga wears blue, defiant Masha wears black, and optimistic Irina wears white. Their brother Andrei (Alex Moggridge), a melancholy intellectual, wears sweaters and slacks. His wife Natasha (Emily Kitchens) sports several different shades of pink, accompanied in the first act, by an odd green belt (or, as she puts it, “more of a greeny beige”).

You could take all of those sartorial choices at face value. Olga is fusty and school-marmy (she works as a headmistress, after all). Masha is a vamp. Andrei is more sophisticated than his siblings. Natasha is garish and hot-headed. Irina is pure. The set design (conceived by Annie Smart) also bristles with symbolic imagery, from the potted daffodils and snapdragons — which seem to represent cloistered beauty and hope in the first act — to the perfect, triangular napkins, to the opulent furnishings of the sisters’ home, to the forbidding birch trees in the background. In this play more than in others, every set piece has a reason for being there. Resplendent thought it may be, the set still has the feel of Henrik Ibsen: It’s a domestic sanctuary in a town whose centerpiece is the army garrison. In Act IV, Smart gives the illusion of an escape hatch by removing furniture and opening up walls, so we can finally see the trunks of the birch trees. But in reality, there is no escape for these women.

So they’re caged birds, and they act accordingly. Irina describes Moscow with the same giddiness that Masha reserves for her lover, Lieutenant-Colonel Vershinin (Bruce McKenzie). Natasha morphs from an awkward commoner into a menacing lady-of-the-house. The other soldiers, played comically by David Abrams, Cobe Gordon, Thomas Jay Ryan, and the fabulous James Carpenter, mill about the sister’s home throughout Acts I and II like a group of guys sneaking into a women’s boarding school dormitory. The whole first half of this Three Sisters feels like a light-hearted comedy, with characters ribbing one another and milking their lines for laughs. A lot of humor gets bottled into the pauses between lines of dialogue. Even characters who turn out nefarious and cruel seem likeable at first. Natasha, the parasitic sister-in-law, is a perfect example. In the first Act, she’s a vehicle for comedy. By Act III, she’s a reptile.

In most versions of Three Sisters, the character relationships are less important than the macro-theme of entrapment and upper-class malaise. And this one is no exception. An audience member who isn’t paying close attention to the Masha-Vershinin pairing won’t notice it until after the fact. Nor is much distinction granted to the different members of the army battalion. Three Sisters is a play in which allegory supersedes character, and in Ruhl’s version, form surpasses allegory. The beauty here lies in her delicate balance of colloquial and poetic language. Characters speak in aphorisms (e.g., “If the station were far, then it wouldn’t be near”) but they also talk wanting to “pour” themselves into bed, or seize the “long carpet of days” as it unravels before them. Such dense metaphors are a hallmark of Ruhl’s writing. In this case, though, her writing retains all the Russianness of Chekhov.