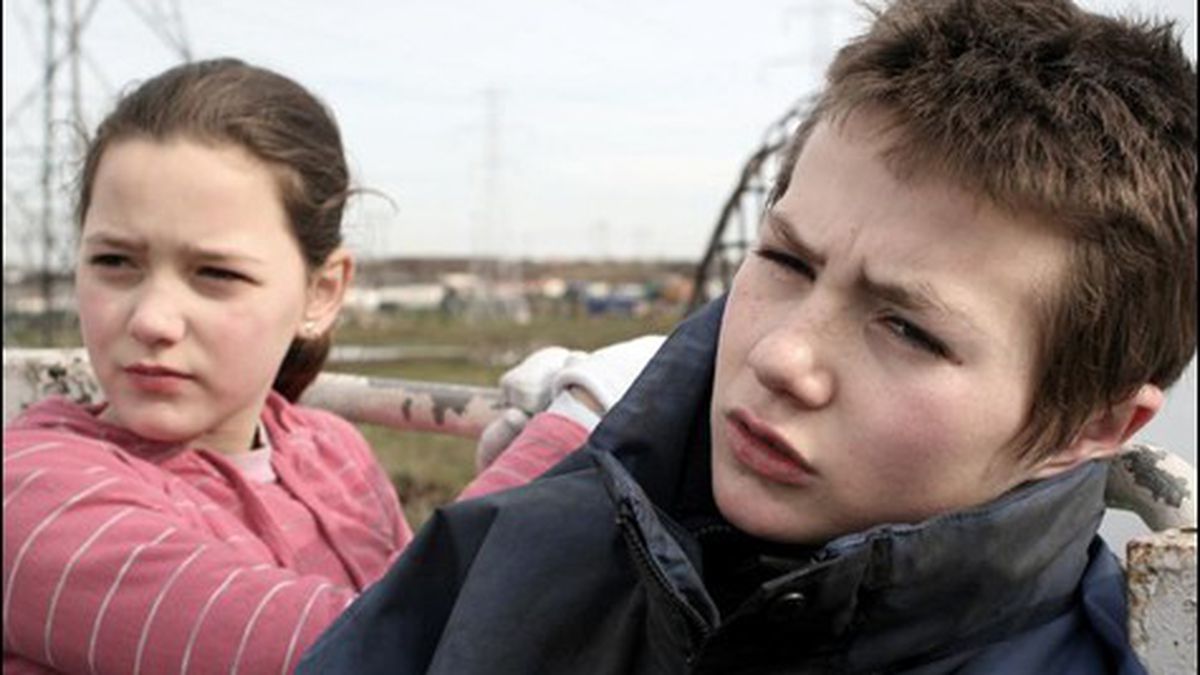 The Runaways: Kisses and Winnebago Man

The “cute kids from Ireland” craze continues. A few weeks ago, it was Alison Barry as Colin Farrell‘s gabby daughter in Neil Jordan‘s selkie story Ondine. Now we’re getting a twofer: juvie actors Kelly O’Neill and Shane Curry as Kylie and Dylan, the similarly gabby (isn’t everyone in Ireland glib and poetic?) eleven-year-old protagonists of Kisses, writer-director Lance Daly‘s slim, stealth-mythic tale of two superfluous young people and their trip through Night Town.

“Superfluous” because neither of them is wanted or needed at home. Dylan’s dad is a violent drunk who beats everyone in the family he can get his hands on — which means Dylan avoids him as much as possible. Next door at Kylie’s, her mother and sisters are just as belligerent. In fact, the two kids’ parents, neighbors, and friends in the dreary suburb where they live are uniformly nasty and uncouth. Insults fly thick as fists and every third word is “fookin’.” Accordingly, our two runaways are tough but lovable, and faithfully rely on each other for support. It’s the most natural thing in the world for the two of them to light out for the big city of Dublin late one afternoon to escape the wrath of Dylan’s father.

It happens to be the Christmas season and magic is afoot. The film, which has been in black and white all along, slowly slides into full color as the pair gets further away from home. Kylie blows her cash on shoes and candy at the mall, and buys Dylan a haircut. Their secrets come out. We notice that Dylan uses an inhaler. They meet the usual sort of people you’d encounter on the road: a friendly canal dredger who gives them a lift (David Bendito); a busker (José Jiménez); a taciturn Bob Dylan impersonator (busy actor Stephen Rae, who no doubt is required by law to appear in every movie produced in Ireland); and a young woman (Elizabeth Suh) who may or may not be a prostitute.

After dark, the kids’ conversation turns to the Sack Man, a menacing legendary figure who grabs children and carries them off in a sack slung over his shoulder. Dylan and Kylie’s nominal quest is to locate Dylan’s older brother Barry, who ran away and never returned. But we can see that their real business is to fall in love.

Lance Daly’s Ireland is not the scenic Irish wonderland of Ondine — it more closely resembles the terror-and-hope-filled young person’s urban twilight zone of Somers Town or Fish Tank, or, to be more aptly Irish, the Old Main Drag frequented by “Kitten” Braden in Breakfast on Pluto. The two first-timers who play Kylie and Dylan are, of course, more charming by far than any manicured and pedigreed big-name entertainer. And yes, Dublin-born-and-raised filmmaker Daly has a definite thing for Bob Dylan. There’s also a bit of consumer-friendliness in the addition of English subtitles to the release print. Brogue can only be enthralling when it’s understood.

He’s Epic Beard Man‘s older brother. Or maybe one of his former Navy buddies. Jack Rebney, senior-citizen subject of the documentary Winnebago Man, has at least two other things in common with Oakland’s most notorious bus passenger: 1) innate combativeness, and 2) the fact that both men achieved worldwide fame through viral videos.

Back in 1989 in Forest City, Iowa, broadcast newsman and announcer Rebney was on location as the on-screen host of an internal sales training video for the makers of Winnebago recreational vehicles. It was a troubled shoot. Rebney seemingly had difficulties getting through each and every line of the script, and when the guys in the production crew noticed, they began egging him on by laughing at him, fiddling with props, etc. They also saved the outtakes, especially Rebney’s lengthy, profanity-laden tirades. His frustration reached seismic levels. Steam issued from his ears. Surely he was the angriest man in the world.

All this would have been academic, and we’d be discussing Dinner for Schmucks instead, if someone hadn’t rescued those 1989 outtakes and privately circulated them, at first on VHS tape. The “Winnebago Man’s” popularity remained at low-cult level until the invention of YouTube, when the phenomenon exploded exponentially. Winnebago Man suddenly became a red-hot media hero, but no one knew his name or anything else about him.

Enter Ben Steinbauer, a film professor at the University of Texas whose shorts have played at South by Southwest. He tracked down the now eighty-year-old Rebney, living as a virtual recluse in a caretaker’s cabin outside Manton, California, east of Redding, in the shadow of Mount Shasta. Rebney, nearly blind and living with a dog named Buddha, has evidently been living underneath his own personal shadows as well, and has actively shunned society. Or he did until Steinbauer came along.

How does the unwitting, unwilling subject of a viral video manage to relate to his newfound celebrity, let alone to his public? The germ of Steinbauer’s apparently harmless, seemingly brainless doc goes right to the heart of the community-building aspect of the internet. Grumpy old man Rebney at first barks and snarls at the notion of crazy kids who think they love him because he cussed and fumed on video twenty years ago.

But something strange and wonderful happens when Steinbauer convinces Rebney to accompany him to San Francisco’s Red Vic Movie House to appear at the Found Footage Film Festival. Turns out all the propaganda was true. In their most benign form, viral videos are just another way of conversing, of people communicating with each other. The crowds lined up to see Winnebago Man didn’t come to hoot at the freak — they came because they identified with him. And Jack Rebney, the bitter former professional media producer and voice talent who turned his back on network TV news orgs and “shut the door” on the rest of the world, found that no matter how much he bellowed he couldn’t resist YouTube.

Steinbauer’s doc, with its ostensibly pathetic echoes of Best Worst Movie and the lonely recesses of cult worship, resists following its subject to a nostalgic dead end and instead helps Winnebago Man create a new persona for himself, in front of an adoring crowd on Haight Street. Maybe Epic Beard Man could do the same. In the meantime, you’d be doing Winnebago Man a kindness, in a manner of speaking, by seeking him out on YouTube.