.The Rise of Pot Arrests at People’s Park

Park-goers facing felony weed charges, including medical patients, say UC Berkeley police are falsely accusing them of selling drugs as a way to force them out of the park. 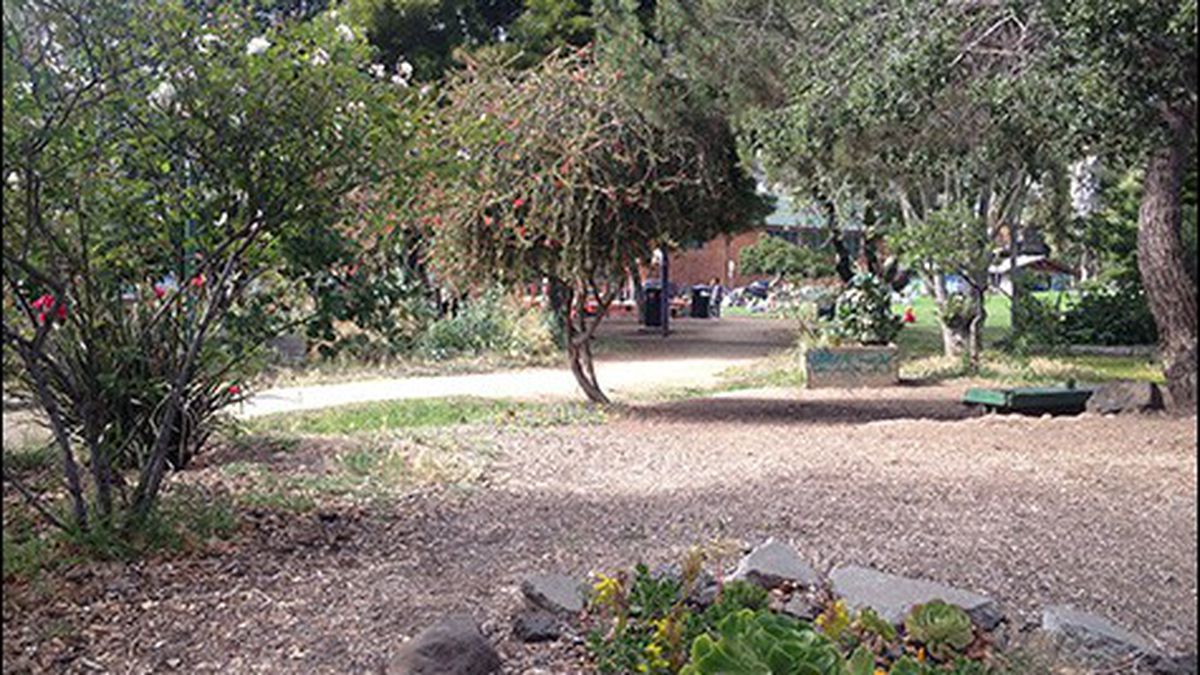 Just before 3 p.m. on May 16, multiple UC Berkeley police officers stopped 48-year-old Kai Freshman as he was leaving People’s Park along Dwight Way, about a block from Telegraph Avenue. Freshman, a longtime Bay Area resident, said the cops asked to search his bag and eventually ordered him to sit on the ground. According to a UC Berkeley police report, officer Robert Ibanez had been watching Freshman for nearly two hours and had allegedly observed him allegedly selling marijuana. The officers proceeded to handcuff Freshman and search his pockets and backpack, where they found a total of 19.93 grams of pot — less than one ounce.

“It was very humiliating and really frustrating,” Freshman said in an interview. He said he had smoked pot in the park that day with some friends, but never sold anything. What’s more, he has a medical marijuana identification card and is legally allowed to carry the amount of pot he had on him. But the cops wouldn’t listen, he said. “They didn’t want to hear that I had a doctor’s note. … They didn’t even acknowledge it.”

Police arrested Freshman and he’s now facing a felony charge for possession of marijuana for sale. He continues to deny the allegation in court. While his arrest was jarring to him, his situation is far from unique. Freshman and others who regularly frequent People’s Park argue that UC Berkeley police have shown a pattern of falsely accusing marijuana users of selling drugs or having an intent to sell, both much more serious crimes than a simple possession citation. And data from the university police department show that pot-related arrests are common and on the rise at People’s Park, the 2.8-acre university-owned plot located three blocks south of campus.

The arrests and subsequent convictions typically result in formal “stay-away orders,” which mean defendants are banned from returning to the park as their cases move forward and sometimes as part of their ultimate sentencing. These orders, critics argue, appear to be the motivating factor behind the arrests: that is, cops are allegedly using marijuana charges to kick certain individuals out of People’s Park — and prohibit them from returning. The situation is especially alarming for people like Freshman who use marijuana for medical purposes.

According to a report that a UC Berkeley police communications and records supervisor compiled for me, a total of 174 drug-related cases — a mix of arrests and citations — were reported at People’s Park between January 2011 and June 2014. Those cases included a total of 224 alleged violations, because some involved multiple alleged offenses. About 54 percent of the 224 alleged violations were for marijuana possession, and an additional 30 percent were for marijuana possession for sale (meaning intent) or direct sale (including giving pot away, which is illegal). The remaining cases mostly involved other controlled substances. And the number of marijuana-related cases has steadily increased at People’s Park — 28 in 2011, 54 in 2012, and 78 in 2013. So far this year, 33 cases have been reported. The jump is especially pronounced in the felony marijuana possession for sale category: There were only three cases in 2011, but there were seven in 2012, and then twenty in 2013.

For marijuana possession charges, less than one ounce is treated as an infraction similar to a traffic ticket with a maximum fine of $100; more than one ounce carries possible jail time of up to six months and/or a fine of $500 or less. Medical patients are allowed to possess certain amounts of marijuana based on their doctors’ notes. The possession for sale and direct sale charges are classified as felonies.

Since the university first purchased the land back in the 1960s, People’s Park has faced community-police tensions. The park was at the center of campus protests in that era and today is monitored closely by university police, in part because it attracts a high number of homeless residents. From the perspective of police, People’s Park is a magnet for crime. In his incident report on Freshman’s arrest, Ibanez wrote, “People’s Park is known for being an area where numerous crimes take place, including drug sales, drug use, alcohol use, battery, and unlawful lodging.”

Three weeks after his arrest, I met Freshman at Willard Park — a City of Berkeley park two blocks south of People’s Park — so that he would not be in violation of his stay-away order. Freshman said that Willard has become something of a gathering spot for People’s Park regulars banned due to drug-related arrests. Freshman, who said he is currently homeless, showed me his medical marijuana identification card and explained that he has been a medical user since 2000; pot helps him with headaches and stress and with pain associated with manual labor from a previous job.

Prior to his arrest, Freshman spent a few hours every other day at People’s Park. He vehemently denied the accusations outlined in the police report and probable cause statement. In his summary, Officer Ibanez said that he used binoculars while hiding in a “place of concealment” and observed two male suspects separately exchanging items with Freshman. The first man appeared to exchange cash for “an item” from Freshman’s backpack; in a different part of the report, he described the item as a bag that appeared to contain a “green leafy substance.” A second male suspect ten minutes later handed Freshman an “unknown object,” after which point Freshman reached into his backpack and handed this man an “unknown object,” the officer wrote.

“Even by [Ibanez’s] own admission in the first report, he says he can’t see what is being handed,” Freshman said of the police write-up. “There wasn’t a drug transaction. … That is a flat-out lie.” He said he was simply hanging out in the park and can’t recall if he ever handed anything to either of these individuals. Further bolstering his case, Freshman said, is the fact that multiple police officers failed to arrest either of those two suspects. Ibanez wrote that “both buyers left People’s Park through an unknown direction of travel,” and that cops were “unable to detain and identify the suspected buyers.” Freshman said he suspects police probably let them go because they didn’t have marijuana on them — because he didn’t sell any to them in the first place. The police report made a point to note the defendant’s past marijuana-related offenses. But Freshman told me those charges were from the 1990s.

“What they’re going after are casual people that are there every day,” he said. “Police are attacking marijuana users and putting on them the label of drug seller.” Freshman also said it appeared that there was a spike in arrests around UC Berkeley graduation, perhaps in an effort to clean up the park. The department data appears to support his hunch — it shows that there were five marijuana possession for sale arrests in May 2014 (two on May 16, the day before commencement), compared to only one arrest in that category between January and April.

Lieutenant Marc DeCoulode of the UC Berkeley Police Department said in an interview that there are a number of circumstances in which an officer may arrest suspects for marijuana possession for sale — including if officers observe transactions or if suspects sell to undercover cops. Even if they have medical marijuana cards, people cannot sell drugs or smoke in the public park, he emphasized. “We do target people that are engaged in illegal behavior … and we do at times surveil the park for people that are selling drugs. We do not want those types of people in the park.” DeCoulode said marijuana arrests aren’t a high priority for the department, but added that, “based on some of the recent activity at the park, we’ve spent a little more time there.” He continued: “We’ve had complaints from the neighbors and from some others that there’s been an increase of people in the park committing illegal activities.”

In response to accusations that the department may have conducted arrests in advance of commencement ceremonies, DeCoulode said, “We do the enforcement periodically. There wasn’t anything specific timed with graduation.” Officer Ibanez did not respond to a request for comment via email.

While he is not familiar with the specifics of the People’s Park cases, Allen Hopper, criminal justice and drug policy director for the ACLU of California, noted that there is a long history of “police officers inappropriately using marijuana as an excuse to target, arrest, harass, investigate, and search people who they suspect of wrongdoing but don’t have any solid basis to justify an arrest or search.” More broadly, Hopper argued that these types of cases illustrate why California should stop wasting limited law-enforcement resources on prosecuting nonviolent, low-level marijuana offenses as felonies; those policies “have destroyed lives and destroyed communities,” he said.

Washington Johnson, a 36-year-old Berkeley resident and medical marijuana patient, told me he spent roughly twenty days in jail after UC police arrested him at People’s Park last November for marijuana possession for sale. Court records show that this arrest also prompted a judge to extend his probation from a previous drug offense. Like Freshman, Johnson denied that any transaction took place, but told me that he had at one point taken his prescribed marijuana out of his pocket.

“I have pretty serious ailments. … This is my medicine,” said Johnson, adding of his arrest and subsequent jail time, “I was lumped in with people committing strong-arm robberies, people doing heinous things.” And the order to stay away from People’s Park stung, Johnson said: “It’s one of my favorite places.”

And at People’s Park, police do enforce the stay-away orders. After Freshman and I talked at Willard Park last month, we walked to People’s Park where he was hoping to point out a few of his friends who could corroborate his story. Within a minute of us arriving at Dwight Way — Freshman had not stepped foot in the park — Officer Ibanez, the one who had originally arrested him, suddenly appeared with another cop by his side and reminded Freshman of his stay-away order. Ibanez told him to leave immediately, noting that he should not be within 300 feet of the park.

As much as he wants to put the case behind him, Freshman said he refuses to agree to any plea deal. As a matter of principle, he said he will not admit to selling drugs, even if it would mean a less harsh punishment.

The only way he will be found guilty, he said, is if a jury convicts him.