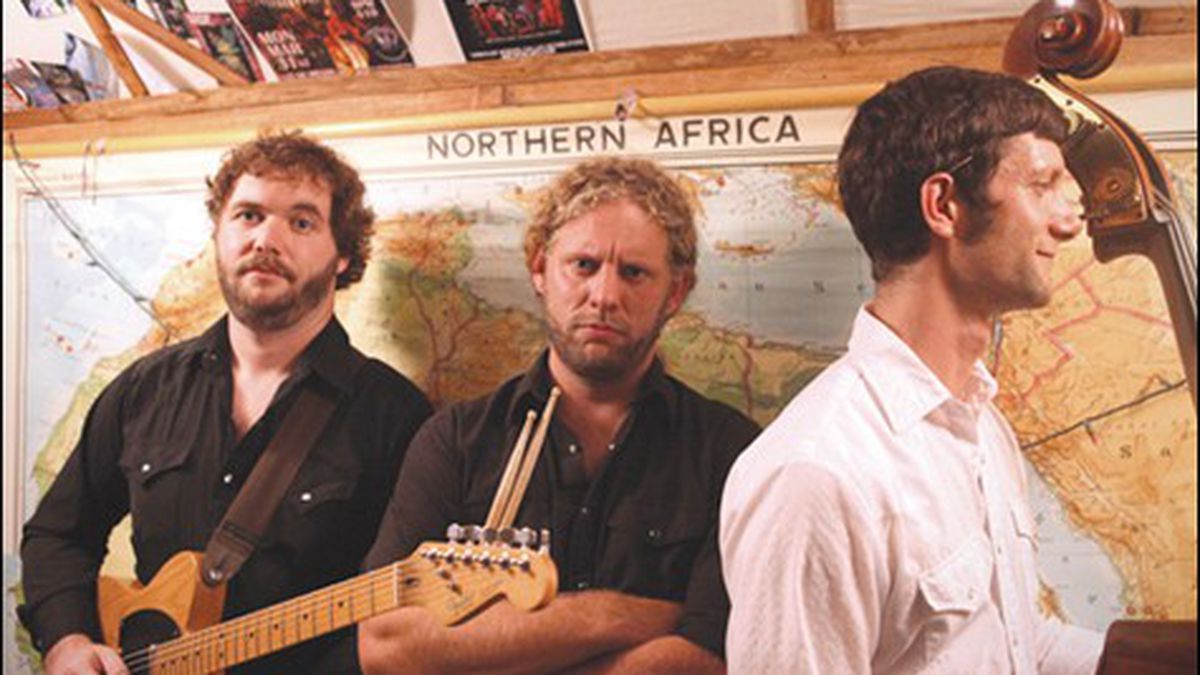 The band's secret? Self-discipline and a rigorous rehearsal schedule.

It feels like the hottest night of the year, a balmy 77 degrees in Oakland’s Temescal district. The air is dense and slick. Cafes and restaurant patios are bustling on Telegraph Avenue. Girls are traipsing down the street in flip-flops and capri pants. The three members of local country trio The Real Nasty are holed up in their 43rd Street studio, running through new material. With a rigorous schedule of four practices a week, they are one of the most rehearsed bands in the Bay Area rock scene. Bassist Ryan Lukas says he wouldn’t have it any other way. “I don’t want to be in a band that doesn’t practice all the time, if it’s the only band I can be in,” he said. Lukas and his two partners — drummer Matthew “Smitty” Smith and guitarist Jacob Groopman — abandoned all their other projects when they started this one. They’d known of bands that rehearsed a lot at their inception, developing a sound so clean and tight that they could record full albums with no outtakes.

Standing out isn’t a huge challenge when you have such an unorthodox setup. The Real Nasty uses unusual instrumentation for a country band. Lukas plays upright bass rather than electric, which gives all the songs an old-timey, wooden sound. Smitty, who was trained as a world percussionist, plays a trap set with no snare. He uses Peruvian cajón for all the backbeats. Groopman provides the rock element, with electric guitar and rangy harmonies. Lukas writes the bulk of the material at a pretty fast clip. He says that at this point the band’s repertoire includes upwards of fifty tunes. It’s not unheard of for a bassist to be a bandleader, but Lukas’ rather unassuming persona makes him atypical — he’s a sideman who accidentally became a rock star. Meanwhile, Smitty and Groopman handle all the logistics.

That division of labor has served them well, thus far. The band formed in earnest roughly a year ago, and it’s already generated two strong albums. Lukas and Smitty actually met at SUNY Potsdam in 1998. Groopman, an Oberlin Conservatory alum, joined the fray by way of the Afrobeat group Albino!, which featured Smitty on drums. Both of them have enough managerial experience to make The Real Nasty seem like a cakewalk. Groopman was the tour manager of Albino!, a larger and more unwieldy ensemble. Smitty used to book the Starry Plough Pub. Lukas is happy being a prodigious songwriter and not bothering with the business end.

That’s not really a problem, say the others. This year the group cut a “360” deal with Berkeley label Ninth Street Opus, which enabled them to do music full-time. It’s more of an equity investment than a traditional record contract: Opus saw three session guys with a concept and a lot potential, and gave them enough seed money to get their business off the ground. It’s enough to cover tour support, recording fees, and merchandising, Smitty said. If Real Nasty becomes profitable, they’ll put money back into the label’s coffers.

In terms of pace and sheer volume of material, the band appears to be holding up its end of the deal. Real Nasty cut its first album, Paper City, about a year ago and released it in June. The follow-up, Strangers and Friends, drops this week. They recorded most of it at Ninth Street Opus’ West Berkeley studio in February and March, before embarking on a West Coast tour. Real Nasty returned a more well-practiced and fully conceived band, ready to cut its last four tracks in July. “Jezebelle,” “Good Time Johnny,” “Girl on the Mountain,” and “East Coast Women” came out in one take, with no edits on the bass and drum parts. The three band members wanted to dredge up the old tradition of putting a well-rehearsed band in the studio and seeing what happened.

In all, Strangers and Friends is remarkably unadorned. It includes songs about gold diggers, cross-country jags, unfaithful women, whiskey, pick-pocketing, and whatever else seems germane to the country-bumpkin lifestyle. The sound is unlike what you hear elsewhere in country-rock, with the woodenness of a cajón set against the staccato timbre of upright bass, and a sharp Telecaster guitar. You can tell, from the backbeats, that Smitty comes from world music, rather than an orchestral pedigree. On the band’s new song, “Soft, Sweet Woman” (not included on the album), he uses a hybridized shuffle beat. The kicks hit on two and four, but it’s almost a three over four feel. Coupled with Lukas and Groopman’s gritty vocals, it’s electrifying.

Real Nasty’s rehearsals give a fairly accurate depiction of how the group behaves onstage. There’s a lot of tacit information exchange between band members. Lukas attacks his bass with the fervor of someone who’s played a lot of Bach Cello Suites. Groopman chicken-picks his guitar and taps eighth notes with his foot. They set the mics up facing one another, but barely look up from their instruments. The music that comes out has a swampy, summer-night groove, but it’s borne of self-discipline and precision. For a band called The Real Nasty, they’re anything but.