.The Problem with Paid Petitioners

In Oakland and across California, petition gatherers working for ballot measures — who are paid per signature — have resorted to shady and possibly illegal tactics. 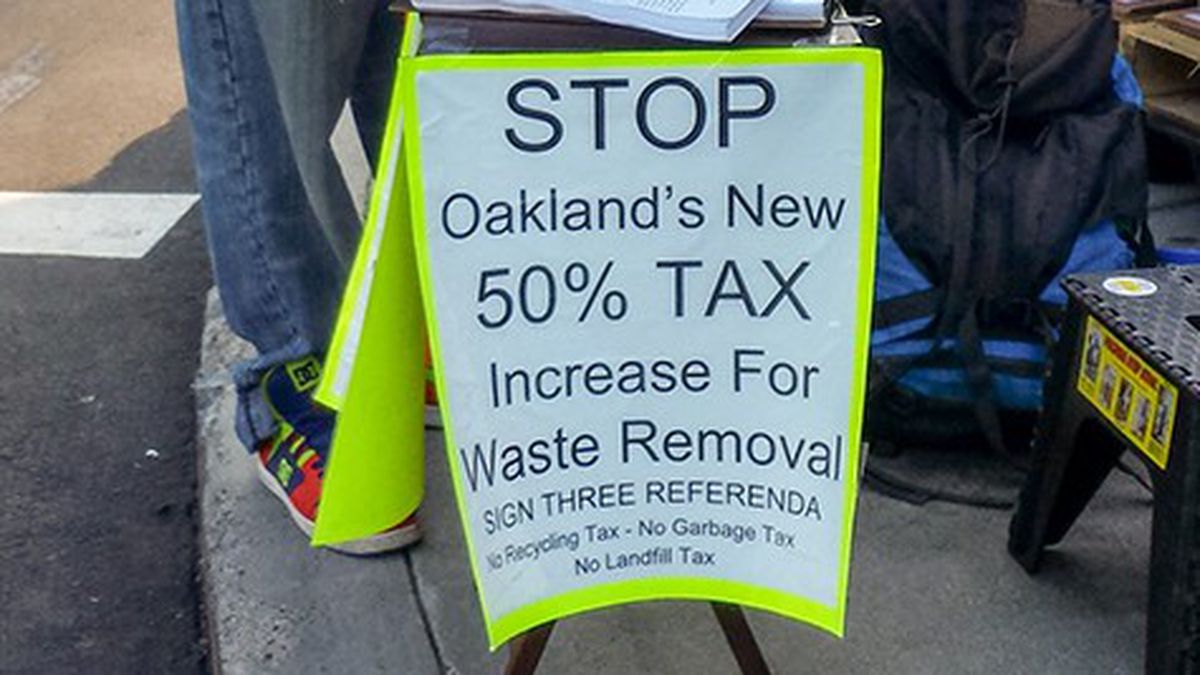 Venture capitalist Tim Draper’s controversial campaign to split California into six states failed this month to get enough signatures to qualify for the ballot. That’s despite the fact that Draper spent millions of dollars on the initiative, sending petition gatherers across the state to solicit signatures from voters. Draper’s initiative also failed despite the fact that some of those “Six Californias” petitioners — who were paid per signature — had allegedly resorted to a range of shady and misleading tactics to trick voters into supporting the initiative.

“It was such a ridiculous idea that it was very difficult to get signatures for it,” said Steven Maviglio, a political consultant who helped lead the OneCalifornia campaign opposing the initiative. “They used every trick in the book to try and fool people into signing.”

According to Maviglio, some of the Six Californias signature gatherers lied to voters by saying their petitions were to oppose the initiative and keep the state intact. Other paid workers, he said, told voters they were collecting signatures to stop a tax increase.

While the circulators failed to get the required 807,615 validated signatures to qualify the measure for the November 2016 ballot, the fight over Six Californias has shed light on some fundamental problems with the pay-per-signature system for ballot initiatives. Hired workers have a direct financial incentive to get as many signatures as possible, which can lead them to spread misleading or outright false information to voters, especially when the actual proposal is a tough sell.

What’s more, when opponents of these campaigns (or ordinary citizens) discover that petition gatherers are telling blatant lies, there is little they can do about it. Paid signature gathering remains effectively unregulated in California. As a result, voters are sometimes duped into signing petitions under false pretenses. “They are just in it for the money and nothing else,” Maviglio said of the paid signature gatherers. “When that happens, integrity is compromised.”

These kinds of accusations aren’t limited to statewide ballot measures. Over the last month, elected officials and residents in Oakland have raised numerous concerns about the actions of signature gatherers working for a referendum measure tied to the city’s garbage contract. The initiative was backed by Waste Management, the Texas-based corporation that lost its bid for Oakland’s trash contract over the summer and has since been fighting to regain control of the $1 billion franchise.

In July, the Oakland City Council unanimously awarded the entire franchise to Waste Management’s competitor, California Waste Solutions (CWS), an Oakland-based firm that currently conducts half of the residential recycling in the city. Waste Management currently does trash and the other half of the recycling, as well as compost collection. The new franchise was scheduled to start July 2015.

After losing the contract, Waste Management launched a referendum drive for a ballot measure that would overturn the council’s award to CWS, and give residents an opportunity to directly vote on the garbage contract in a special election. Waste Management hired local political strategist Larry Tramutola to lead the effort and funded an entity called “Oakland Residents for a Clean City” to organize the signature gathering.

Waste Management officials said this week that the company is canceling its referendum effort because the city council approved a compromise plan on Monday that would allow Waste Management to do trash and compost collection in Oakland while CWS would do all of the recycling. Nonetheless, the referendum process in Oakland, like the Six Californias campaign, illustrated the potential pitfalls of the pay-per-signature model.

“Hundreds of hundreds of people are signing these petitions under false pretenses,” said Kernighan, who has received a flood of emails from constituents confused and concerned about the referendum. Kernighan said that one Oakland resident told her that a signature gatherer said, “‘Residential recycling is going to be cancelled.'” And when Kernighan herself approached a petition gatherer stationed outside the Peet’s coffee shop on Lakeshore Avenue, she said he told her: “‘Did you know that for the next ten years none of the garbage is going to be sorted and all of it is going to go to the landfill?'”

When Kernighan told the signature gatherer that this was inaccurate, she recalled, “He got in my face and said, ‘Maybe you should learn some critical thinking skills.’ And he started telling me how stupid I was.” More recently, signature gatherers started going door-to-door, sparking a range of heated confrontations with residents, the councilmember added.

Kernighan said she believes petition gatherers were getting paid two dollars per signature. Because the franchise is broken up into three contracts — trash disposal, residential recycling, and compost and green waste — each person had to sign three times in support of repealing each ordinance. That means one voter could be worth $6, which makes the job very lucrative for successful petitioners.

“They are pretty desperate,” said Kernighan, adding, “It’s very hard to do anything about it other than try to put out the truthful information to the public.”

Ken Katz, a Grand Lake district resident, said that when he confronted a petition gatherer about the false claim that the initiative would stop garbage rate increases, the man said, ‘”But that’s what my manager told me to say.'” After Katz’s wife raised questions, a different petitioner insulted her, followed her to her car, and took photos of her license plate, Katz said.

In response to the referendum drive, CWS organized outreach efforts throughout Oakland to try to correct the record, according to the company’s chief operating officer Joel Corona. In addition to the claims Kernighan cited, Corona told me that petition gatherers had falsely told voters that CWS is not based in Oakland and is a non-union company. He also said one petition gatherer was caught passing out a CWS flyer to voters, making it seem like the petition was to support CWS, not Waste Management.

CWS has been encouraging voters who may have unwittingly signed petitions to submit letters to the city to rescind their support, Corona said. As of last week, the city had received roughly six hundred withdrawal requests, said City Clerk Latonda Simmons.

Zac Wald, chief of staff for Councilmember Lynette Gibson McElhaney, said the tactics of the petitioners reflected poorly on Waste Management’s ethical standards. He added: “It raises troubling questions about the pay-per-signature business when it’s this heavily controlled by a major corporation with deep pockets. … The referendum process is to serve democracy, not corporate welfare.”

Waste Management representatives referred me to Frank Rizzo, a spokesperson for the Oakland Residents for a Clean City coalition. Rizzo declined to tell me how many signature gatherers had worked on the campaign or how much they were paid.

He said some were hired locally and others were more “professional type signature gatherers.” He said the coalition had been working with a firm that specializes in signature gathering, but declined to name the firm. Tramutola did not respond to a request for comment.

Rizzo said that the coalition responded to complaints about misinformation and corrected signature gatherers as needed. “Our goal is to get things right,” he said, adding, “We’ve attempted to make every effort to ensure that petition gatherers are getting the facts out and are acting … in an appropriate manner with the public.”

Critics of the pay-per-signature system have repeatedly pushed for reforms in California. Over the past decade, numerous statewide legislative proposals have attempted to curb the problem, including bills that would have altogether banned the pay-per-signature practice for initiatives, referendums, and recall petitions. In 2010, lawmakers proposed mandating that signature gatherers wear badges that disclose that they are paid. A bill last year would have required that statewide ballot initiatives use volunteers for at least 10 percent of collected signatures.

None of those suggested reforms, however, passed, and critics say that efforts to launch investigations into specific firms usually go nowhere.

In the case of Six Californias, Arno Political Consultants, a Carlsbad-based firm, was hired to coordinate the signature gathering. In 2005, that company faced accusations that its signature gatherers were tricking voters into signing an anti-gay marriage petition under the guise of supporting a measure about the sale of wine in grocery stores.

“The firms that hire these people should be punished,” said Maviglio. “Where else do you hire a con artist and get away with it?” Over the summer, Maviglio wrote to the California Secretary of State’s Office to raise concerns about Arno’s signature gatherers, but that agency, he said, is a “black hole for complaints.”

A spokesperson for the secretary of state said that complaints are confidential, but that the office investigates election fraud allegations and, when warranted, forwards cases to appropriate prosecuting offices.

Michael Arno of Arno Political Consultants did not respond to a request for comment for this report.