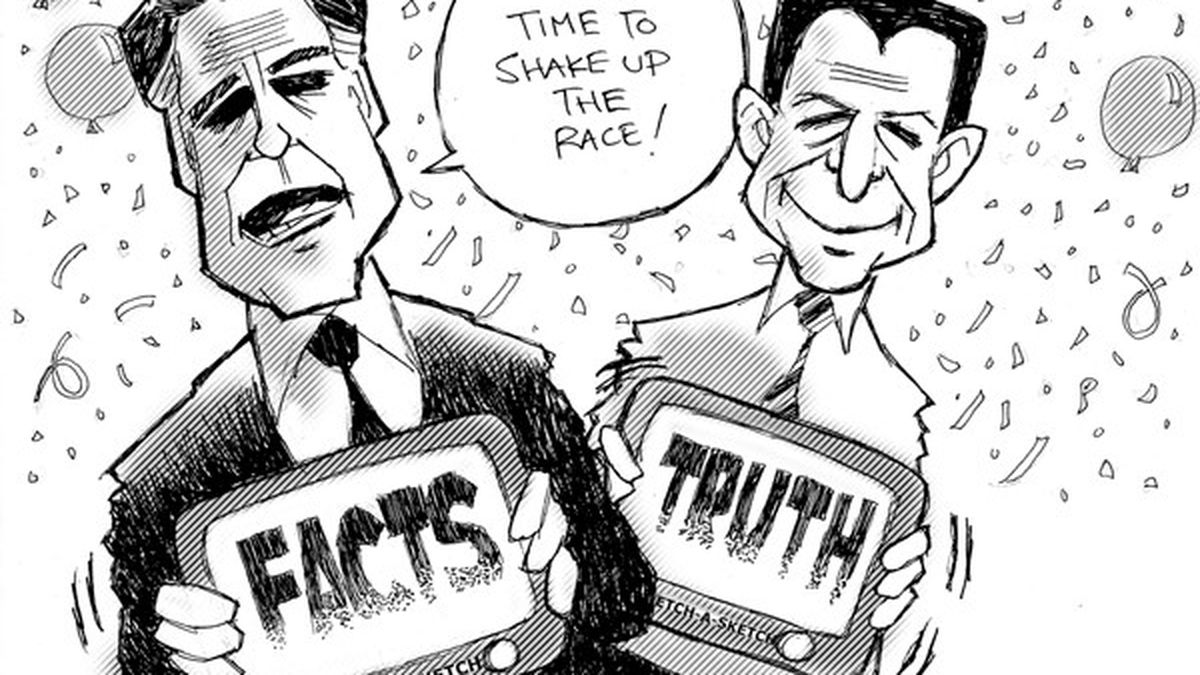 Romney and Ryan believe they'll win by telling lies, because voters have stopped paying attention to the news.

Mitt Romney and Paul Ryan made it clear last week that they believe they can win the White House by telling lies, over and over again. During their GOP convention speeches, the two men lied repeatedly and deceived the public proudly. They also had to know that journalists would point out their deceit and hypocrisy; indeed, reporters started doing it almost immediately after the speeches. Even Fox News called Ryan’s speech “deceiving.” But Romney and Ryan don’t care, because they’ve made what may be an unprecedented political calculation: It’s irrelevant whether the news media points out their lies and deceptions because many voters no longer pay attention to the news.

It wasn’t that long ago when politicians were afraid of being caught in a lie. They knew that if they lied, then journalists would point it out, and they’d have to apologize or make up some believable excuse for lying if they wanted voters to vote for them. It was a simple system: Lie, get caught, and show contrition — or lose the next election. But Romney and Ryan proved definitively last week that they believe this system is no longer operative.

In their post-truth world, there is no political penalty for lying, because the news media doesn’t matter. “We’re not going to let our campaign be dictated by fact checkers,” Romney pollster Neil Newhouse boasted to reporters recently.

So Romney and Ryan have embarked on a strategy that consists of telling lies, and then telling some more. They’re doing it in major speeches, and in a barrage of TV ads. In effect, they’re betting that voters are more likely to pay attention to political ads they see during their favorite primetime TV shows — such as American Idol and Dancing with the Stars — than to news reports that point out that the ads are packed with lies and deceptions.

The post-truth strategy might just work. Some news organizations, like The New York Times, are blaming the success of the Romney-Ryan plan on the polarization of the news media — that Americans no longer pay attention to news reports that don’t reinforce their preconceived beliefs. But it’s also true that the news media has been in decline over the past two decades. And it’s true that many mainstream news reporters refuse to call a lie a lie. Last week, the Associated Press provided the perfect example with its headline: “Ryan Takes Factual Shortcuts in Speech.”

Romney and Ryan also are positioned perfectly for their new strategy: They’re swimming in political campaign cash and they’re backed by deep-pocketed Super PACs and dark-money groups. As such, they’ll be able to flood the airwaves with lies and deceptions — as they’ve already been doing in swing states. They’re also betting that many voters will only hear their lies, and so for these Americans, the lies will be the only truths they know.

Here are fourteen of the lies and deceptions from Romney and Ryan’s speeches and from their current TV ads:

1. Ryan claimed that President Obama “took” $716 billion from Medicare to fund Obamacare and that he and Romney will “protect” Medicare. But Obama did not “take” any funds from Medicare. He achieved savings in the program by lowering future reimbursement rates to medical providers, like doctors and hospitals. People on Medicare today and in the future will not be affected by the cuts. Ryan also failed to acknowledge that his own budget plan envisions a similar $700 billion savings from Medicare. He also proposes to privatize Medicare and replace it with a voucher system in which seniors will have to use vouchers to buy private health insurance.

2. Ryan again criticized the Obama stimulus package, but didn’t acknowledge that he lobbied the Obama administration for stimulus funds for his own Congressional district.

3. Romney criticized Obama for government bailouts, but didn’t acknowledge that one of his companies, Bain Capital, would have collapsed were it not for a $10 million federal bailout.

5. Ryan blamed the credit downgrade of the US government on Obama, when S&P stated it was in part because the federal government had not raised taxes — tax increases that Ryan and his fellow GOP representatives have steadfastly refused to vote for.

6. Ryan criticized Obama for not embracing the recommendations of the bipartisan Simpson-Bowles debt commission. Ryan, however, did not acknowledge that he was a member of that commission and voted against its recommendations.

7. Ryan criticized Obama for not balancing the federal budget, but did not acknowledge that his own budget plan doesn’t envision a balanced budget for at least twenty years.

8. Romney and Ryan repeated the lie that Obama said in a speech that small business owners did not “build” their own businesses. Obama said that business owners throughout the country are helped by the fact that government builds roads that the businesses and their employees use and operates schools that educate future workers.

9. Romney and Ryan criticized Obama for the failure of some small businesses during his administration, effectively saying that it’s okay to blame the government if a business fails, but it’s not okay for the government to take some credit when it succeeds.

10. Romney and Ryan blamed Obama for not accomplishing more during his first term, but failed to acknowledge that Republicans in Congress attempted to block or actually blocked nearly all of Obama’s initiatives.

11. Romney said that Obama embarked on an “apology tour” around the world immediately after taking office, but Obama never once apologized for America’s behavior to anyone.

12. Romney claimed that Obama raised taxes on the middle class, but Obama has raised no taxes during his administration.

13. Romney claimed that when he ran Bain Capital, it “helped” companies save jobs, when, in fact, Bain Capital’s typical business practice was to saddle companies it took over with huge amounts of debt and outrageous “management fees,” thereby forcing the companies to lay off thousands of workers.

14. In a TV-ad barrage, Romney and Ryan say Obama eliminated the work requirements in welfare. The president did not; he allowed states to relax the requirements, but only if they could show that more welfare recipients in their states were actually getting jobs.

Former Alameda Mayor is Interested in Running for City Council