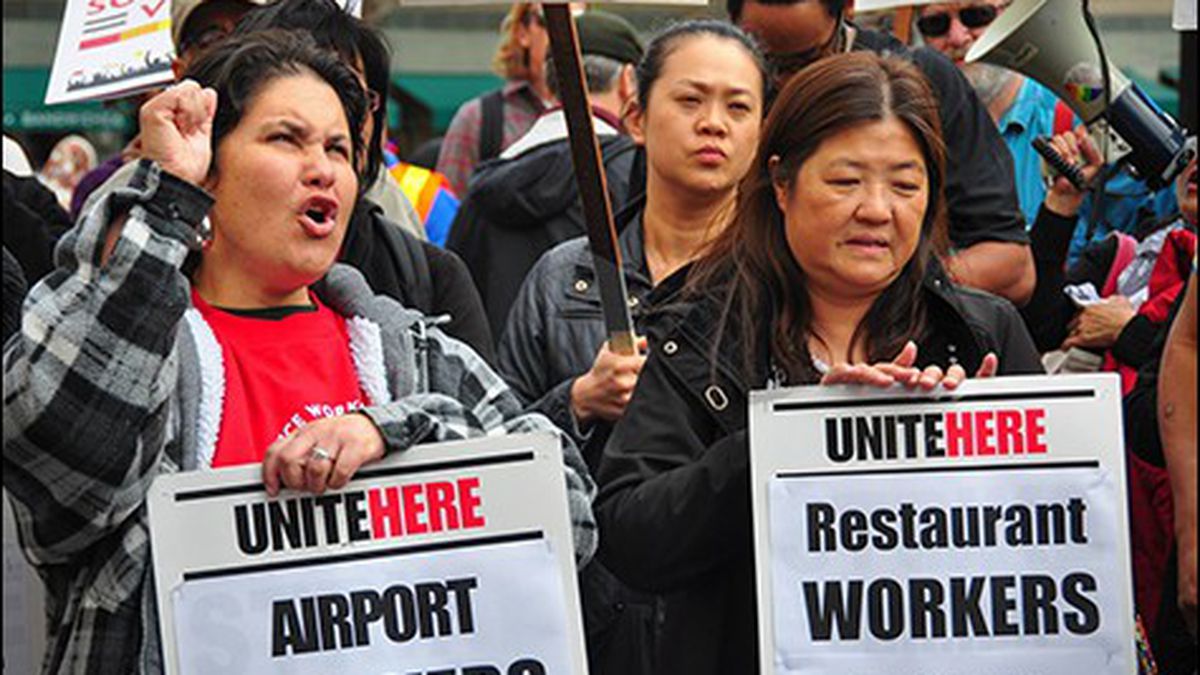 The Port of Oakland’s Fight For Living Wages

The owners of fast-food franchises at Oakland Airport argue that they are small businesses that should be exempt from the city's living wage law. Will the courts ultimately agree?

On March 5, 2002, more than 75 percent of Oakland voters approved a measure requiring businesses that contract with the Port of Oakland to pay their employees a living wage. That meant employers would have to pay roughly four dollars more per hour than the California minimum wage at the time. Notably, the measure would affect merchants doing business at Oakland International Airport, which the port owns and operates.

The living wage law, however, included a key loophole — one that is now at the center of an intense legal battle between the port, a local union, and a number of retailers at the airport: that is, businesses with twenty or fewer employees would be exempt from the requirements. And for years now, the owners of Subway and Jamba Juice outlets at the airport have not complied with a key aspect of the port’s living wage: giving employees twelve days of paid time off per year. The operators of these chain outlets argue that, based on the number of workers they employ at the airport, they are small businesses that should be exempt from the law.

The port, however, argues that these employers are subject to the living wage law and have been violating it. In 2006, before both the Subway and Jamba Juice franchises moved in, the port further expanded its policies by mandating that all new tenants comply with living wage requirements, regardless of the number of workers they employ. This requirement was included in the port’s subsequent requests for proposals and lease agreements with new retailers. From the port’s perspective, the Subway and Jamba Juice franchises have both violated the terms of their leases — and the law — by repeatedly denying workers paid time off, including sick leave. But a recent order from a judge signals that the port could face an uphill legal battle.

The case carries significance beyond these specific businesses. For starters, the dispute highlights some of the difficult obstacles municipalities can confront when trying to enforce living wage policies. And these kinds of wage laws, experts note, are only effective if relevant government agencies have powerful mechanisms to address and correct violations. In the case of Oakland Airport, the ultimate resolution of this drawn-out battle could set an important precedent for the wage obligations of contractors tied to a major economic engine for the city and region. And while the port has invested significant resources into investigating these employers and pushing them to meet living wage standards, it’s unclear if the courts will ultimately take its side.

When the Express first reported on these airport labor disputes in 2012, employees of the Subway and Jamba Juice — with support from Unite Here Local 2850 (the union that represents local workers in hotels, airport concessions, and food service) — were accusing their employers of numerous labor violations and anti-union actions. The employers are CMC Food Services LLC, which runs the Jamba Juice, and NNF Grewal Incorporated, which runs the Subway. The union and a group of employees alleged that workers were not only denied paid time off, but that their employers were retaliating against them for speaking out and taking steps to organize. Both employers fired workers after they filed wage complaints. After a lengthy administrative investigation, port investigators determined early last year that CMC and Grewal had violated living wage provisions and retaliated against their employees. But the business owners challenged these findings in an Alameda County Superior Court petition filed last June, launching complex litigation that has advanced this month, with the parties presenting oral arguments on June 30.

Notably, Alameda County Superior Court Judge Evelio Grillo has called into question the legality of the port’s 2006 policy mandating that all new tenants — even those with fewer than 21 employees — comply with living wage requirements. That policy, Grillo wrote in a recent order, is in “direct conflict” with the small business exemption originally written into the city charter in 2002: “Where the Charter has expressly exempted small businesses from the Living Wage requirements, the Port cannot require in a contract what it is expressly precluded from imposing in a regulation.” A city department cannot ignore city charter in this manner, the judge continued, arguing that the living wage provisions in the Subway and Jamba Juice contracts must then be considered void. While not a final ruling, the business owners are applauding the judge’s opinion.

“To us, this is a major statement of the law,” Amira Jackmon, Berkeley-based attorney representing CMC and Grewal, said in an interview. “The court said that if these businesses have fewer than 21 employees, they cannot be made to abide by the [living wage] law. … That’s at the heart of the port’s case.” She added: “All we are asking the port to do is stay within the law.”

If the judge ultimately sides with Subway and Jamba Juice, the chain outlets — and all other similar businesses at the airport — could be exempt from not only having to provide paid time off, but also from having to pay the current living wage of $13.75 an hour (the law allows employers to pay $11.96 an hour if they offer health benefits).

Robert Bernardo, Port of Oakland spokesperson, declined to comment on the living wage dispute. In court documents, the port’s attorneys have argued that the language of the living wage law in city charter does not bar the port from enacting additional ordinances that impose obligations on small businesses. The port has also argued that CMC and Grewal waived their rights to living wage exemptions when they signed leases that included specific living wage requirements. Elizabeth Hinckle, attorney for Unite Here — which is not a party to the litigation but has represented employees in living wage claims said, “We don’t see any conflict between the city charter and the port’s actions,” but declined to comment further. Representatives from Subway and Jamba Juice did not respond to requests for comment.

Regardless of the complex legal nuances of the case, from the perspective of the union and impacted employees, this is simply a matter of earning decent wages from employers who should be able to afford them — especially considering their business assets and the amount of money they’ve spent fighting the port. Navdeep and Gurinder Grewal, the husband-and-wife duo who run NNF Grewal, operate numerous Subway restaurants throughout Oakland and San Leandro — at one point as many as ten different locations, according to the union. CMC Food Services runs both a Jamba Juice and Gordon Biersch restaurant at Oakland airport.

For low-wage employees, the stakes are high. If the businesses were to meet the port’s demands, said Sarah Norr, a researcher with Unite Here, “it would not make these into high paying jobs. It would give you paid sick days so you can afford to stay home with the flu when you work with sandwiches.”

From a policy standpoint, it only makes sense that there are consistent regulations at the airport, so that all airport employees can earn living wages and receive paid time off regardless of which chain franchise employs them, said Jennifer Lin, research director for the East Bay Alliance for a Sustainable Economy (EBASE). “It’s important that no worker is left out at the end of the day.” EBASE released a report in 2003, one year after the original living wage measure passed, showing that the adoption of the policy resulted in more than four hundred airport workers receiving wage increases.

Hakima Arhab, a 29-year-old Subway employee, was fired in 2012 after she filed a living wage complaint. She was re-hired about a year later and is still working at the airport Subway today — even though there have been no changes in sick day policies. “This has been almost two years. My co-workers are so frustrated,” Arhab told me by phone during a recent break. “Even when I’m sick, I come to work.” Arhab, who lives in Oakland and is currently attending Laney College, said she simply can’t afford to take unpaid days off. “My income is so small.” According to Norr, Arhab lost out on more than $16,000 worth of wages between the time that she was wrongfully terminated and her reinstatement. When she was rehired, she was paid that amount in back wages as part of a settlement of a National Labor Relations Board Complain that is separate from the current litigation. The Grewals were not available for comment, according to Jackmon, their attorney. Jackmon confirmed that NNF Grewal does not offer any paid time off to the airport Subway employees, but said the Grewals are examining the policy and may adjust it in the future.

Joe Cook, president of CMC, emphasized in an interview that his employees are paid at least $13.75 per hour — which is the current port living wage rate — and said employees get five days of paid time off after a year of employment. “The Port of Oakland since 2012 has been trying to prosecute us and has been trying to paint a picture that we are not doing what we are supposed to do,” he said. “We have fully complied with the living laws because we are exempt.” Between CMC’s Jamba Juice and Gordon Biersch operations at the airport, Cook oversees a total of roughly fifteen employees. “This is my only source of income. It’s the only thing I have in this world,” he said. “We’re a small business.” Since 2007, Cook said he has lost roughly 37 percent of his sales due to declining traffic at the airport. “We’re barely paying our bills,” he added.

Regarding allegations of retaliation, Jackmon pointed me to the port’s own investigation, which noted that the Jamba Juice employee whom CMC fired two days after she filed a living wage complaint had left in the middle of a shift without permission, leaving the store staffed by inexperienced workers. The port, however, still ultimately determined that the termination constituted retaliation. Jackmon also refuted claims of retaliation by NNF Grewal.

Jackmon and Cook both argued that the union has spearheaded this living wage fight as a way to pressure employees of these businesses to organize and join the union. And that is why they continue to fight this battle, they said. If their operations were unionized, Jackmon said, “My clients would be put out of business.”

The Sweet Sadness of My Life as Zucchini