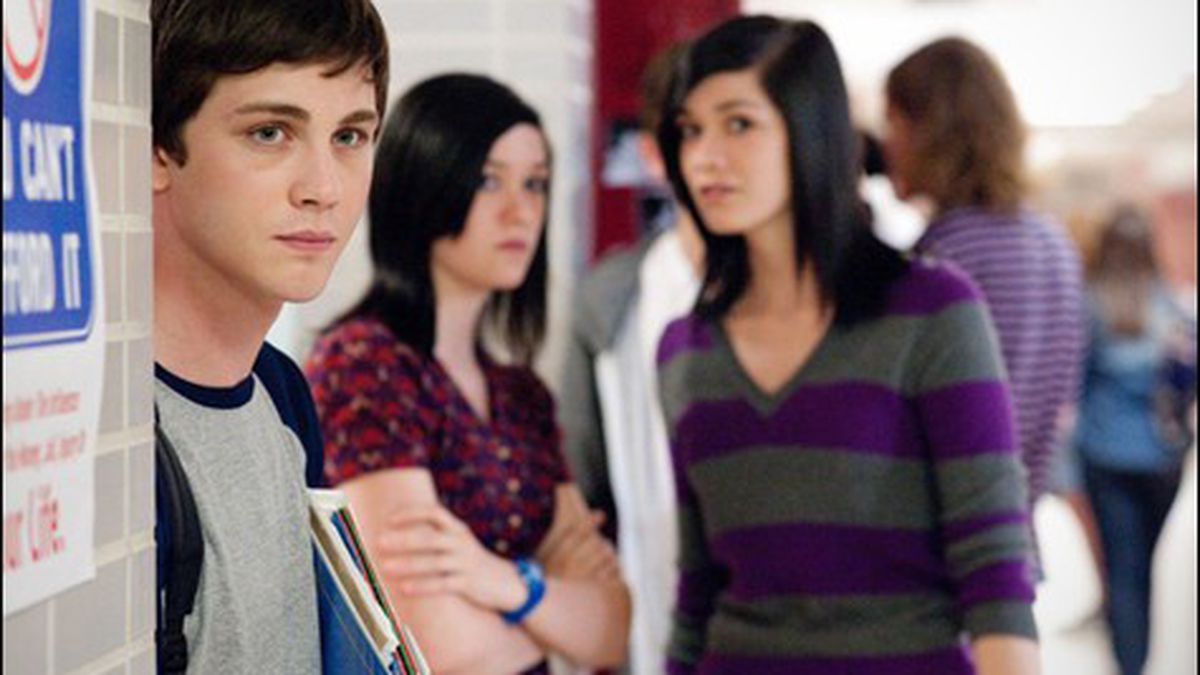 The Perks of Being a Wallflower

From the advertising we were convinced the characters of The Perks of Being a Wallflower were going to be college students. Turns out they’re high-schoolers. It’s one of those movies in which all the “teenagers” horsing around in the hallways and cafeteria are really in their twenties, and look it.

Once we get over that, we’re free to observe that Charlie (Logan Lerman from The Three Musketeers), the bookish, outcast, freshman nerd protagonist, has dark things going on deep inside, indicated via flashback. Like untold thousands of picked-on juvie movie protagonists before him, Charlie desperately needs a friend. What we discover, by slow degree, is that merely getting laid — the remedy for more than half the heroes in this type of film — isn’t going to do it for Charlie. No, writer-director Stephen Chbosky’s subdued, carefully drawn feel-gooder (adapted from his own novel) aims to make Charlie, and us, work a little bit for his redemption.

Perks is a period piece, set in a vaguely defined time when fanzines, David Bowie, books, typewriters, mixtapes, Rocky Horror, closeted gays, and Toklas brownies are in fashion. Against all odds, torpid Charlie gets adopted by the Wallflowers, a clique of relatively sophisticated seniors — they admire foreign films — led by fashion-forward step-siblings Patrick (Ezra Miller, the demon child from We Need to Talk About Kevin) and Sam (Emma Watson of Harry Potter fame). Patrick is gay; Charlie seems curious. Charlie likes Sam; Sam reciprocates teasingly. The boys are generally cuter than the girls out there in Mill Grove, Pennsylvania.

Charlie, Sam, Patrick, and their friends interact in a refreshingly open and candid way with each other. It’s idealized, of course. They talk like thirty-year-old screenwriters on coffee break, which is exactly how precocious high-school “art faggots” want to communicate — they get it from watching movies. Filmmaker Chbosky constructs a tight, confined microcosm for them where the outside world never intrudes. As in all the best adolescent coming-of-age stories, the struggles and triumphs of life take place in an aquarium, or maybe a snow globe. Good taste is timeless and everyone can be a hero, just for one day.

Chbosky and his young cast evidently take the scenario and these precious characters seriously, something that’s absolutely necessary when plot twists begin to pop up in the last reel. When they grow up, Charlie is going to be a novelist, Sam another Edie Sedgwick, and Patrick a reincarnation of Z-Man from Beyond the Valley of the Dolls. But first they’ve got to get out of Pittsburgh. Andy Warhol did it and so can they.