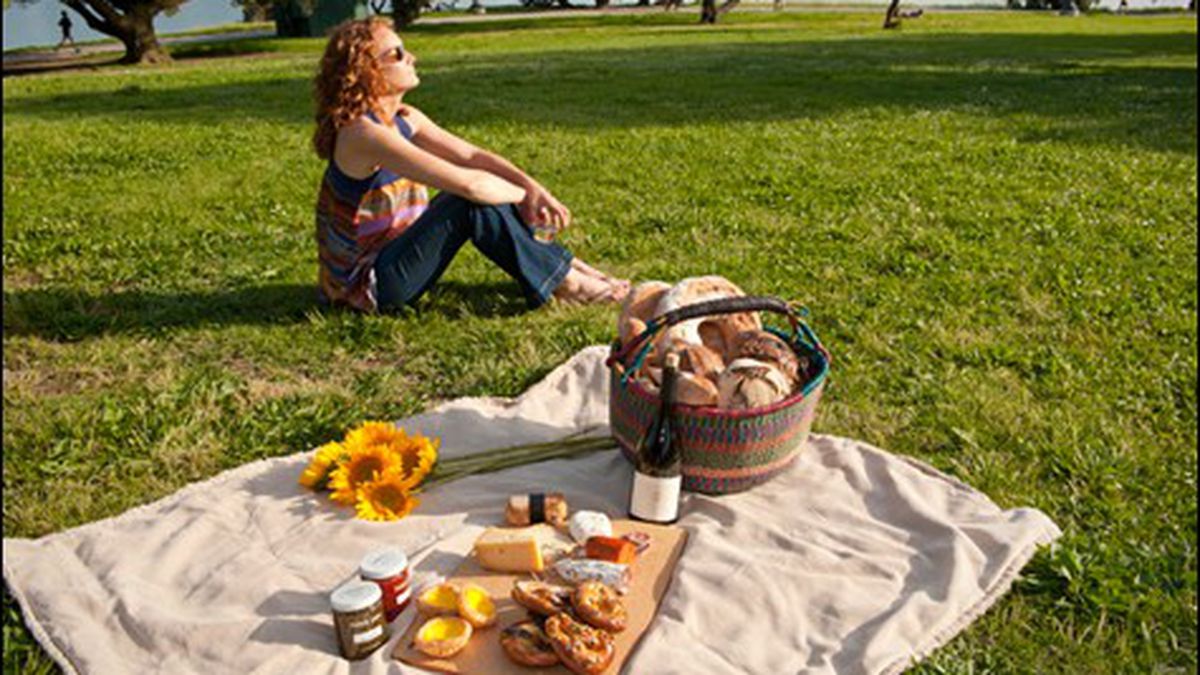 How to assemble a delicious, locally-made, and portable meal for a lazy summer day.

When I was growing up, every family outing was a picnic of sorts: not just basket-and-blanket affairs, but also ski weekends and trips to Six Flags — even, I’ll admit, Saturday afternoon matinees at the local cineplex.

It’s not just that my parents were frugal; they also simply didn’t believe there was decent food to be had at your typical roadside pit stop or concession stand. Why buy greasy burgers and fries when instead you could feast on Tupperwares full of garlicky cold sesame noodles, California rolls (the Chinese-American kind, with cottony dried pork “sung”), and soy-sauce-braised eggs? And fruit. Lots and lots of fruit.

In my adult life, I’ve embraced this DIY approach to dining on-the-go, as well as picnicking’s more conventional trappings: bread, cheese, nice scenery. And while there’s no shame in packing a couple of sandwiches and calling it a day, I’m an overachiever: The nice thing about living in the East Bay is that there are dozens of delicious ready-made portable food options. So next time you’re heading out for a lazy summer day in Napa or at Tilden or Lake Temescal, consider stocking your basket with some of these picnic-perfect treats.

Let’s start with bread. It’s for good reason that The Acme Bread Company (1601 San Pablo Ave., Berkeley, 510-524-1327, AcmeBread.com) remains the supplier of choice for so many Bay Area restaurants — its loaves are great. Since picnickers may not have a sharp knife on hand, Rick Kirkby, Acme’s production manager, recommends the bakery’s Pain Epi or ring-shaped Couronne. Both are made from the bakery’s sweet rustic dough, which yields a chewy-crusted loaf with a heady fresh-bread smell. The Epi, in particular, is one of Acme’s iconic breads: Each loaf is shaped like a sheaf of wheat, with individual “ears” that are meant to be broken off. It’s perfect for tearing apart with your hands and then slathering with soft cheese or jam or whatever. I love each ear’s pointy tip, which is wonderfully crunchy and sharp enough to poke someone’s eye out.

You can find Acme bread all over, but the Epi is only sold at select locations — for our purposes the best place to find it is at the bakery’s original retail store in Berkeley.

As an alternative to buying bread, head down the street to Gaumenkitzel (2121 San Pablo Ave., Berkeley, 510-647-5016, Gaumenkitzel.net), where chef Anja Voth takes the idea of making everything from scratch seriously enough to make her own yogurt and to flake her own oats. One of Voth’s signature items is her fresh German pretzel ($2.75 each). These are deep-brown, rustic-looking little beauties, no two shaped exactly the same, each topped with salt or a seed of some sort — my favorite variations are poppy and toasted pumpkin seed. But the best part is the texture: dense and chewy enough to give your jaw a workout, like a good New York bagel.

Voth says people in this country are used to eating warm pretzels straight from the oven, when they’re at their softest. But she explained that in Germany it’s common to pick up a pretzel in the morning and eat it later in the day, perhaps cutting it in half, sandwich-like, and putting some meat in between. Perfect for a picnic, in other words.

Next, head over to The Cheese Board (1504 Shattuck Ave., Berkeley, 510-549-3183, CheeseBoardCollective.coop), the North Berkeley cheese store and collective, where you grab a playing card at the counter and wait for your number to be called. During my visit, Erin Crowe, one of the shop’s many knowledgeable cheesemongers, guided me through a variety of picnic-appropriate cheeses, offering generous tastes of each one. My favorites included a couple of local cheeses: the Jalapeño Chevre from Sky Hill Farms — with a mellow tartness and just a hint of heat — and a creamy and refreshing raw-milk Point Reyes blue cheese. From farther afield, there was the nutty Prima Donna, a classic aged Gouda from Holland. And then a real stunner from Italy: a Moliterno sheep’s milk cheese with black truffle, which packed an intense, almost intoxicating truffle punch. This one’s pricey, at $21.50 a pound, but a tiny wedge will do the trick.

You could just go to The Cheese Board and ask for these picks, but what would be the fun in that? Grab a number, taste some cheeses, and pick your own favorites.

Meanwhile, to select the ideal picnic wine, I consulted with Jared Brandt, who owns Donkey and Goat Winery (1340 Fifth St., Berkeley, 510-868-9174, ADonkeyAndGoat.com) along with his wife Tracey. Brandt steered me toward light, refreshing wines that pair well with a variety of foods. My favorite was the Stone Crusher ($30), an unusual amber-colored white that’s made the way red wines are made, with the skin of the grapes on. Crisp and slightly caramelly, it’s a wine that drinks like a hard cider — and Brandt says you can pair it with everything from pork belly to shrimp tacos.

“But the lazy part of me would choose a screw-top wine,” Brandt added, mentioning a Grenache Blanc and a Grenache Noir ($27 each) that’ll both be released later this month. According to Brandt, these screw-tops are light, high in acidity, and taste like summertime — no corkscrew required. Wines on Piedmont, Paul Marcus Wines, and Berkeley Bowl West usually have a decent selection of Donkey and Goat wines.

For carnivores, there’s nothing like having a bit of cured meat at a bread-and-cheese-centered picnic, giving you the option to make yourself little mini-sandwiches. Mark Pastore, co-owner of the salumeria Boccalone (1924 International Blvd., Oakland, 510-261-8700, Boccalone.com), noted, “If it’s a passionate date, I’d pick one of our spicier salami. If it’s a family thing, I’d pick one of our milder salami.” Given those criteria, my two picks would be Boccalone’s Nduja and its Brown Sugar & Fennel Salame ($12 each). The former is a bright-orange soft salame that’s smoky and spicy and can be spread like a pâté. The latter is a hard salame, requiring a Swiss Army Knife at least; it’s got a real meaty chew — almost jerky-like — and an intense fennel flavor. Once unwrapped, either salame will add a bit of atmosphere to your picnic: Both have a distinctly Old World look, covered as they are in a (harmless) powdery white mold, like some ancient thing.

The best place to buy Boccalone products in the East Bay is the Saturday Grand Lake Farmers’ Market. (It’s worth noting, that if — unlike me — you’re a sane person who doesn’t feel like zigzagging all over Oakland and Berkeley to assemble your picnic, any of the area’s weekly farmers’ markets would make for an excellent one-stop shop.)

The farmers’ market is also a good place to pick up some fruit. During the summer, my go-to is whatever juice-laden pitted fruit is at its peak. At the Grand Lake market or any of the ones in Berkeley, my favorite pitted fruit vendor is Kashiwase Farms (9681 West Ln., Winton, 209-394-2246) — it’s the stand with the most varied and generous array of free samples. As owner Steven Kashiwase, explained, which fruit to pick depends on which two- or three-week slice of summer it is: In June, there are golf-ball size sweet-tart Flavorella plumcots — a cross between a plum and an apricot — or Zee Diamonds, a classic yellow peach. In August, you can pick from the royal family of pluots: floral, pale-green Flavor Queens or purple Flavor Kings, which have the tropical sweetness of Hawaiian Punch.

Since we’re filling out the sweet side of our picnic basket, I should mention that the ideal picnic condiment is a jar of Emeryville-based INNA Jam‘s spicy-sweet pepper jams ($12). Owner Dafna Kory makes these jams from whole peppers — skin, seeds, and all. The bright-red Fresno chili jam is beautiful in the jar and has immediate heat, tempered by just the right amount of sweetness. The jalapeño jam is less sweet and sneaky-spicy in the back of the throat, really showcasing the pepper’s distinct flavor. Kory says that on a picnic she likes pairing the Fresno with blue cheese or with meat; the jalapeño goes well with chèvre or cream cheese. Local 123, Sacred Wheel Cheese Shop, and Monterey Market are just a few of the local shops that carry INNA Jam products.

It’s an awfully Eurocentric list so far, isn’t it? As a nod to the Asian-inflected picnics of my childhood, the next stop on my shopping spree was Berkeley Bowl West (920 Heinz Ave., Berkeley, 510-898-9555, BerkeleyBowl.com), where chef Chikara Ono (of B-Dama) has revitalized the supermarket’s sushi counter. One of the bestsellers is Ono’s take on Spam musubi, the popular Hawaiian snack item ($2.25). The concept is simple: grilled Spam atop a block of rice, the whole thing tied together neatly with a nori (dried seaweed) ribbon. Ono’s version takes it to another level by lightly dousing the rice in soy sauce and adding another layer of Spam underneath. The whole thing is like the cutest little sandwich you’ve ever seen.

Spam being Spam, this isn’t the best option for people who don’t like aggressively salty (or processed) foods. But sold still-warm and wrapped tightly in plastic, Ono’s Spam musubi is the perfect portable snack — ultra-savory, comforting, and umami-rich. Just don’t chill it or the rice will harden up.

Finally, because it’s best to end any meal — picnics included — on a sweet note, I like to pick up some egg custard tarts from Oakland Chinatown’s Ruby King Bakery (718 Franklin St., Oakland, 510-835-2366). Ruby King’s egg tarts have a flaky crust and a delicate, not-too-sweet eggy center. These are best when they’re still warm, but hold up well over the course of a day. At sixty cents each, they’re dirt-cheap, too. Just make sure you buy at least six so they’ll give you a box; otherwise, all the flaky bits will end up strewn all over the inside of your picnic basket.

The Woods, the Cell, and the Dry Gulch