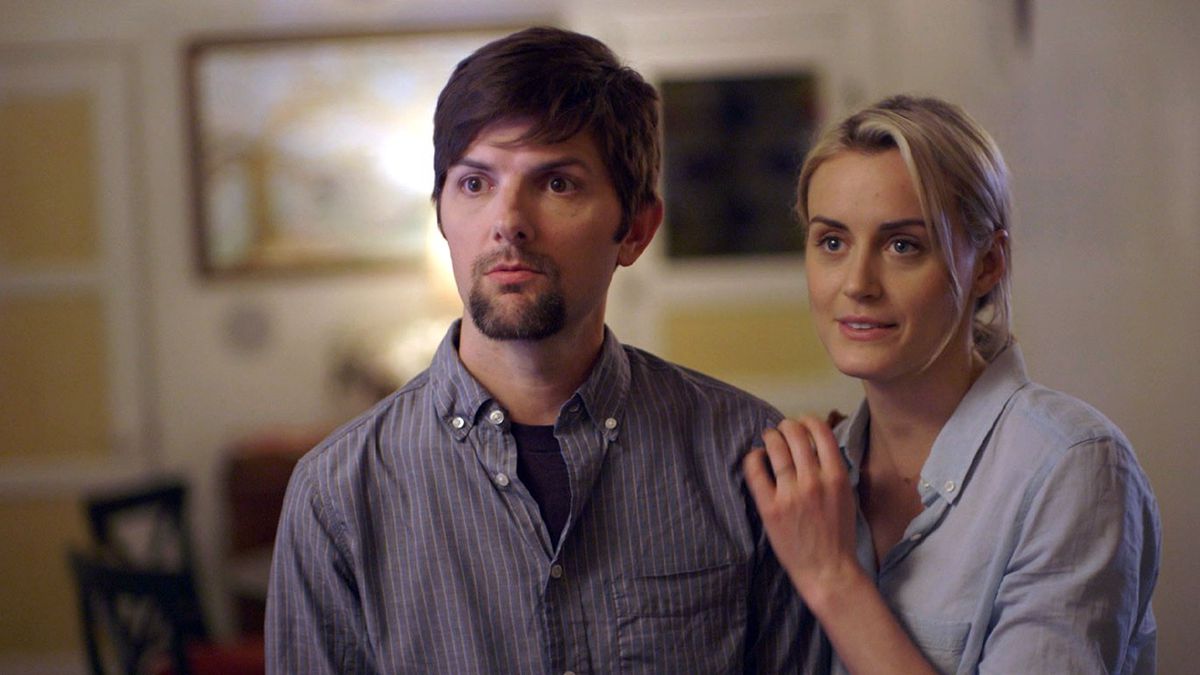 The Overnight: A Little Kink, A Little Fun

We are curious — to a degree.

It’s almost impossible to discuss Patrick Brice’s comedy The Overnight without spoiling the plot. Even the lightest synopsizing is too much information, other than to mention that it’s the story of two late-thirties-early-forties, married-with-children, urban couples and their disastrous first attempt to socialize. So here’s some advice: Unless you really don’t care one way or another, don’t read any further until after you’ve seen the movie. And you should see the movie despite its slender premise.

Educated professionals Alex (Adam Scott) and his wife Emily (Taylor Schilling) have just moved to Los Angeles from Seattle with their toddler son. They’re still a bit apprehensive and tentative about the new surroundings, so it’s something of a relief when Kurt (Jason Schwartzman), whose young son is playing in the park alongside the newcomers’ kid, strikes up a conversation, followed by a dinner invitation. Alex and Emily accept, and soon the parents are nattering good-naturedly into the night, while the little boys are put to bed upstairs. The vaguely mysterious Kurt, it turns out, is a fine arts painter; his wife, a cool, European-accented blond named Charlotte (French actress Judith Godrèche), works as a masseuse — Alex and Emily’s jobs really don’t matter, except that they’re mundane. The four attractive “creative class” people hit it off easily, although it’s plain that Kurt is steering the conversation.

Well before the halfway point of the tidy, eighty-minute film, a distinctly kinky vibe asserts itself. If we’ve studied up a little beforehand, we already know that writer-director Brice made the two-character “Craigslist thriller” Creep, and that mumblecore auteur Mark Duplass, who co-wrote and starred with Brice in that 2014 production, is listed as The Overnight’s executive producer, with actor Scott and his wife Naomi Scott also sharing producer credits. So from that pedigree we expect The Overnight to add a pronounced sense of squirmy self-consciousness to an otherwise innocuous marital comedy about four seemingly conventional people drunkenly flirting with the idea of spouse-swapping.

In this type of lifestyle piece, it’s never the thing itself, it’s the way it’s presented that makes or breaks the deal. Kurt and his huge acrylic close-up portraits of puckered anuses aside, Godrèche’s Charlotte is clearly the most provocative personality of the foursome. She’s the one who has her own separate bedroom, stars in soft-porn videos, and spends her idle hours servicing customers down at the massage parlor, as the flabbergasted Emily observes through a peephole. If the filmmakers had forgotten about the boys and allowed Charlotte and Emily to find their own way through the evening, The Overnight might have been a completely different, maybe better, movie. But that would have meant abandoning TV and movie funnyman Scott (The Secret Life of Walter Mitty) and Wes Anderson stock company player Schwartzman (The Grand Budapest Hotel), the movie’s only claims to any sort of mainstream accessibility.

The number-one event in this ultimately harmless comedy, and the build-up to it that takes up the entire film, would probably occupy one or two scenes in a corner of any reasonably risqué commercial European film. That is, the two bi-curious couples would get together and swap mates, then go out and rob a bank or lead a strike or something. Is group sex such a titillating prospect for contemporary American domestic comedies that it’s the central focus of the narrative? You betcha.

The Overnight is funny in spite of itself. With its demure skinny-dipping and “Mommy’s Milk” videos, it tiptoes around its target so convincingly that we’re glad to hang around and see what happens. Of course it chickens out. You’re not likely to see even B-level movie actors actually having sex in Hollywood products these days. In the meantime, The Overnight carefully milks prurient chuckles out of the ménage-à-quatre-interruptus and fans of mock-exploitation can go away happily without having broken any rules. By the way, both Scott and Schwartzman wear prosthetic dongs, so there’s at least one thing in common with Boogie Nights. The Overnight, from the makers of Baghead, is a sex comedy by people who don’t really seem to worry that much about sex. Whatever gets you through the night.

Another Fish Species on the Brink