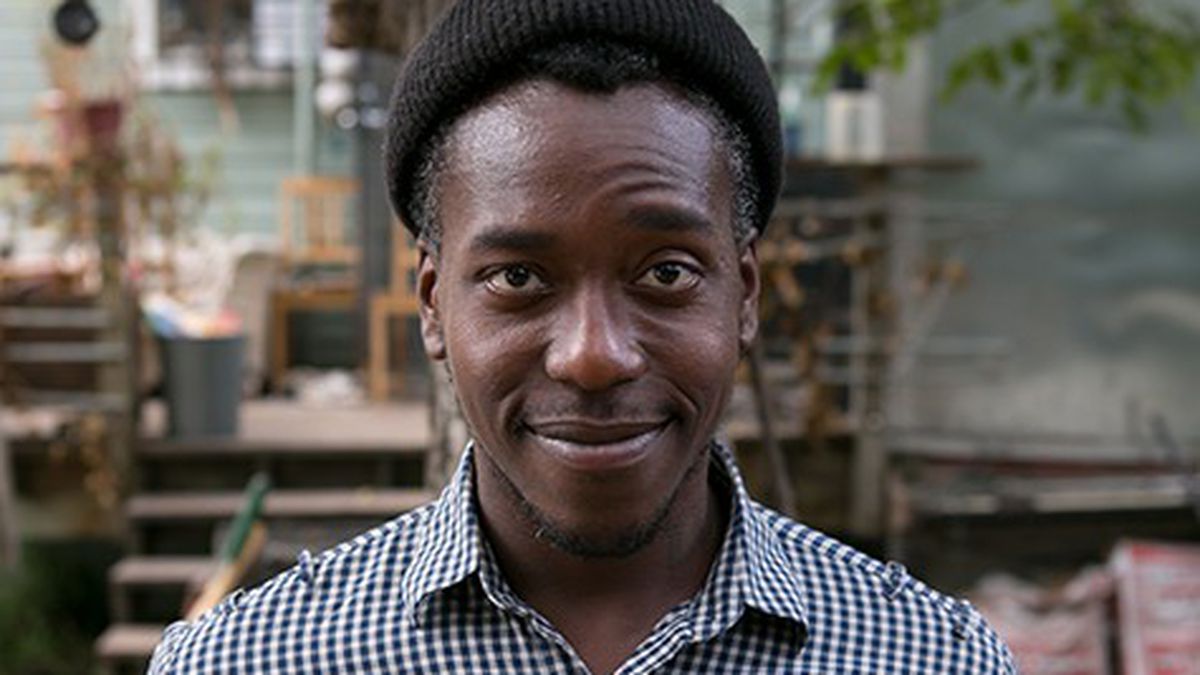 The Only Riot Boy

Until early last year, Fag School was a distant memory for the local musician, dancer, and writer. Since photocopying the first issue thirteen years ago, he’s toured the country as the front/hype man for Gravy Train!!!! and the leader of The Younger Lovers, appeared on the cover of the San Francisco Bay Guardian and the Express, ranked on Out Magazine’s annual “Hot List,” programmed performance art at the Berkeley Art Museum, and recently co-starred in the independent film I Want Your Love.

But, in early 2013, Purnell pulled out the Fag School files for Janelle Hessig. The local cartoonist, musician, and filmmaker approached Purnell about illustrating his old cruising reviews. She had decided to follow through on an old pact: his words, her pictures, released in a book as the inaugural title of a new publishing imprint, Gimme Action. The collaboration was long in the making — and it explodes on the page.

Entitled The Cruising Diaries, Purnell’s first book compiles 21 brazenly honest accounts of sexual escapades and misadventures (culled from more than fifty) originally published in Fag School, each one accompanied by Hessig’s candid and unflinching illustrations. Purnell recalls sex with ghosts, cops, and various other lovers in Berkeley bathhouses, West Oakland warehouses, co-op strip clubs, East Oakland taco trucks, and ballet class, too. The writing is playful, hilarious, and incisive, embedding commentary on class and power dynamics within the sordid details. The content is unrestrained, expressing nuanced connoisseurship of bodily functions and fetishistic proclivities, but Purnell’s work is best distinguished by his unfiltered, direct tone. His voice and mannerisms leap dramatically from his person to the page, defying a repressive Southern upbringing.

Purnell grew up in Triana, Alabama. In the 1990s, he fell in with a network, built by touring punk bands, fanzine writers, and pen-wielding malcontents in other small towns in order to escape the stiflingly conservative social climate. When Hessig traveled through Chattanooga in 2000, Purnell couldn’t wait to meet her, although he already felt acquainted. “I had been listening to her band, Panty Raid,” he remembered, “and I knew her as ‘Janelle,’ the girl on the cover of the Bratmobile record, because I was really into riot grrrl.” In a testament to pre-internet connectivity, Purnell and Hessig’s respective orbits already overlapped.

Hessig created a zine called Tales of Blarg while enrolled at Pinole High School in 1990. A 924 Gilman Street devotee versed in the region’s scrappy fanzines, such as Maximum Rocknroll, Absolutely Zippo, and Cometbus, Hessig also gravitated toward publications that punks considered trite. “I read all of the time,” she said, “even things that weren’t cool, like Sassy magazine or Mad.” Her work satirized subcultures via lowbrow humor, wrapping meaningful transgressions in an accessible form.

Though deeply enmeshed with artists in the Bay Area and Pacific Northwest, Hessig decided to move to the South. “At a certain point, everywhere I went, I just fucking knew everybody,” she recalled. She moved to Asheville, North Carolina and then New Orleans, bringing her close to Purnell. The last page of Cruising Diaries features an illustration, based on a New Orleans Halloween outing from 2001, of the two on a bike. Purnell appears in his signature party garb — jogging shorts, headband, sneakers, high socks, that’s it — while Hessig dons a Burt Reynolds costume. Hessig soon returned to the Bay and Purnell followed.

“I’ve always had an instinct to protect [Purnell], and I completely failed,” remembered Hessig with a smirk. In 2001, he settled in a warehouse in East Oakland and became a local party fixture. His riotous exhibitionism led to a role in the garish, queer electro outfit Gravy Train!!!!, for which his primary duties were to shed his clothes, sweat, and rally the crowd. “During that period, I was having my first adolescence,” he said. “Growing up so isolated and away from everything, I didn’t get the experience of being a young, wild kid.”

Fag School’s cruising reviews chronicled the colorful details of Purnell’s belated adolescence. “There were a lot of gay punks writing about sex, but it was always this dense text. Nothing was funny or engaging and I didn’t see the type of zines that spoke to me,” Purnell said. His unapologetic style emerged on the page intact — bold, loud, and sometimes misunderstood. “A lot of people who aren’t that insightful would write him off as novel because he’s funny and fun and he takes his clothes off at parties,” said Hessig. “But they miss the point of his intelligence.”

Layla Gibbon, a local writer and musician, agreed. When Gibbon became coordinator at Maximum Rocknroll in 2008, she sought out Purnell as a columnist immediately. “He’s the only riot boy,” she said, championing the political substance and conviction in Purnell’s work. “As someone who was involved with riot grrrl in the early 1990s, there were a lot of these weird fans who worshipped at the altar of certain icons, rather than seeing them as inspiration to do their own thing. … [Purnell] got the idea of riot grrrl as liberation that could be obnoxious, transgressive, and fun. His work embodies that,” she continued.

Of course, Purnell’s literary interests have evolved since Fag School. “The novel I’m writing now is called 100 Boyfriends and it’s completely devoid of humor,” he said. “Most people don’t suspect it but I’m a pretty dark bitch.” Purnell is also completing a memoir, tentatively titled Johnny Would You Love Me If My Dick Was Bigger?, which focuses on a period of his life following the experiences documented in Fag School. “There was a time between 28 and 30 when I didn’t drink, and I was just dating — well ‘dating’ is an optimistic term — these creepy dudes because sobriety made the sex addict thing kick in,” he explained. “The content is pretty heavy. I don’t want people to expect cute, clean sex stories like in Cruising Diaries.“

The release event for Cruising Diaries — a free BBQ, dance party, and reading held at 1-2-3-4 Go! Records (420 40th St. #5, Oakland) this Saturday, September 6 — will keep things cute. “I’m making an interactive painting that’s like a carnival cut-out, so you can put your face in it and be on your own date with [Purnell],” explained Hessig. “There will be a glory hole, too. I’m not sure who’ll use it — but I’m sanding it just in case.”

Uh, About That Sex Slave …