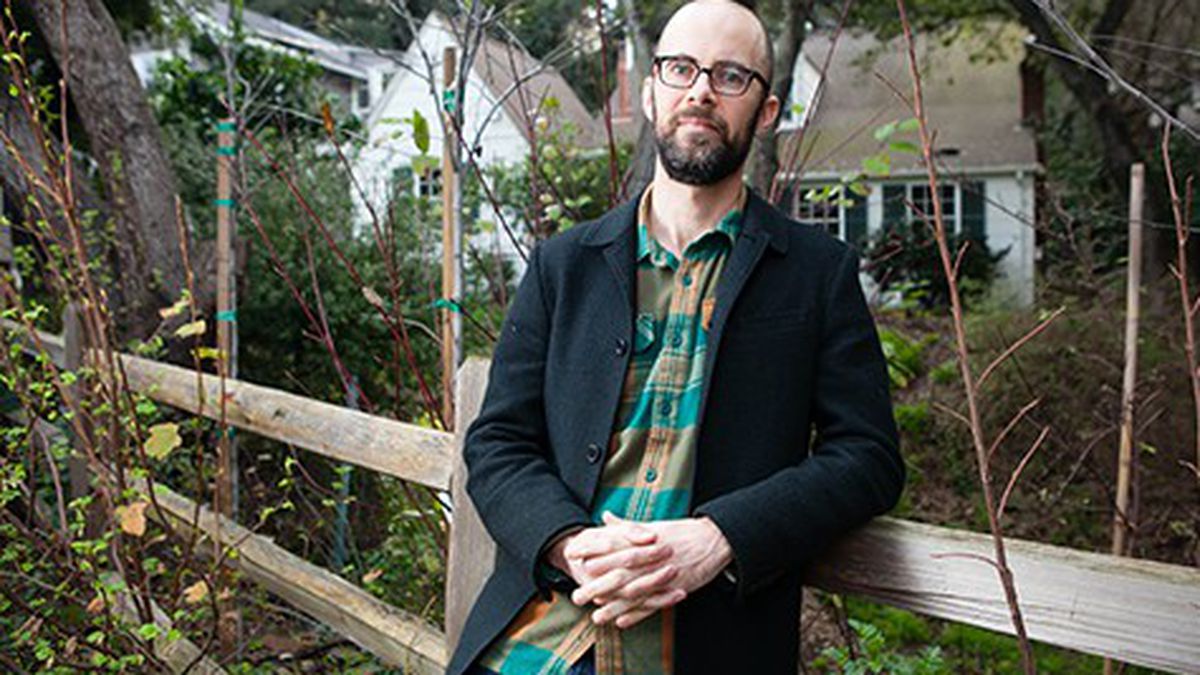 When Josh Harkinson built a new fence on his property so that passersby wouldn't fall into a creek, he was shocked at the response from neighbors and City Hall.

After Josh Harkinson and Rinku Patel moved into their North Oakland home in 2012, they quickly realized they needed to do something about the dilapidated fence in their front yard. Made of chicken wire, the fence was supposed to protect passersby from falling into Glen Echo Creek, which also runs through the front of their property at 3054 Richmond Boulevard. Situated between the street and the creek, the old fence was falling down and obviously presented a hazard, so Harkinson and Patel decided to replace it with a new wooden ranch-style fence and native vegetation. Harkinson believes his new fence and native plants serve a dual purpose: They prevent people from falling into the creek and inhibit erosion along an already steep bank.

But little did Harkinson and Patel realize that their three-foot-tall fence would raise the ire of not only their neighbors, but also of the City of Oakland. “This fence saga is a bureaucratic nightmare that has been nearly two years in the making,” said Harkinson, who is a reporter for Mother Jones magazine.

“I’ve lived here for seventeen years and nobody has ever fallen into the creek, so I feel like it’s solving one alleged hazard by building a fence that’s making an actual hazard,” said Anne Janks, in a recent interview.

Larry Smith, a disabled retiree who has lived in the neighborhood for nearly 22 years, also feels the new fence is making matters worse. “It’s a serious issue at night,” he said. “That area is very dark, and I’ve seen at least four car accidents [over the years] at that corner.”

But Harkinson pointed out that the new fence is only two feet closer to the street than the old one, and there have been no traffic incidents since he put it up. And he noted that during heavy rains, the chances of falling into the creek and drowning are dangerously high if there is no fence there.

After neighbors complained to the City of Oakland, city surveyor Gill Hayes inspected the fence and the property in October 2014 and concluded that the new fence — like the old one — was actually built on city land, which extends from the street into the middle of the creek. Harkinson told me that Hayes’ determination came as a surprise to him, and that he did not know both the old and new fences were on city property.

Soon after Hayes’ visit, city inspector Dennis Foster issued Harkinson and Patel an official Notice of Violation. However, the notice did not mention the neighbor’s qualms about safety. Instead, it ordered Harkinson to “correct the violations,” which the notice defined as “fencing installed in right-of-way without required permits.”

Harkinson doesn’t deny that he had no permits to build the new fence, but said he figured he didn’t need them because he thought the fence was on his property. He also noted that the city doesn’t require permits for wooden fences that are shorter than six feet tall.

Harkinson said that when he approached the city to find out exactly where his and the city’s property divided, the Planning and Building Department told him that in order to verify this information, he would need to have the land officially surveyed, which costs $17,000 to $19,000. Harkinson said he couldn’t afford the survey, and so he has yet to see any official evidence of where the city boundary line resides.

The city told him that because the fence was technically infringing on city property, he would either have to take it down or acquire an encroachment permit for building on city property, which, according to the permit application, costs $2,035.67. However, he had trouble acquiring the encroachment permit, because it required him to obtain private insurance, and he was turned down by two different insurance agencies, he said.

As a result, Harkinson decided to appeal the violation notice. On November 23, 2014, he filed his appeal with the city and included detailed images of the fence, along with historic documents that put surveyor Hayes’ property assessment in question. He also submitted a petition signed by nearly fifty neighbors who agreed that the fence should stay. But after presenting the material to city officials, Harkinson and Patel lost their case. Without the encroachment permit, Harkinson’s only option was to take down the fence. But rather than do so immediately, he decided to wait.

Harkinson said that in April of 2015, traffic and watershed officials from the city inspected and approved his new fence, determining that it does not prevent parking nor does it inhibit traffic flow in the area.

In a recent interview, Rachel Flynn, Oakland’s planning director, said a follow-up inspection occurred in November 2015 to see if Harkinson and Patel had corrected their Notice of Violation. “[The inspector] spoke with the homeowners, and they said they moved the fence out of the city’s right of way,” Flynn said.

In truth, Harkinson had not moved the fence. Instead, he decided to complain to the city about a neighbor’s private parking signs also being on city land. “My position had been if they’re going to allow people to put in private parking signs, why can’t this fence stay?” Harkinson said. And so city inspector Gene Martinelli arrived at the scene in January of this year to address the issue. He reiterated that Harkinson must find a way to insure the fence, or it had to come down.

When the Express spoke to officials with the city’s Planning and Building and Public Works departments, they were initially unaware of Martinelli’s visit, and disagreed on what should happen to the fence. Kristine Shaff of Public Works said her department suggested the fence should stay because it keeps people and trash away from the creek and also prevents erosion, while Flynn maintained that the fence had to either come down or get insured.

Harkinson was surprised by the response from Public Works, so he again decided to wait while city officials deliberated over the fence’s effects on public safety and creek health. Then on February 11, he received a phone call from Oakland Watershed Program Manager Lesley Estes, who told him that city officials involved with the case had met to determine the fate of the fence. But their resolution wasn’t entirely new. “They told me I can keep my fence; I just need to get an encroachment policy,” Harkinson said. “[Estes] said she pushed on the fact that I wasn’t able to get insurance, but they gave her examples of where this has worked and insurance companies that have given insurance for these things. They said I could and just wasn’t talking to the right people.”

“We wouldn’t recommend this if we didn’t think it was feasible,” Shaff told me, stressing the city’s confidence that the fence will get insured.

While Harkinson plans to contact the insurance agencies that Estes recommended, he remains skeptical about his insurance prospects and the resolution as a whole. “I’m going to reach out to those insurance people and see if it can work,” he said. “I doubt any will take just the fence, though. I will probably need an entirely new homeowners’ policy.

“It’s kind of ridiculous because with the encroachment permit, I have to pay the city for the privilege of keeping this fence which replaced the old one that was falling down,” he added. “I don’t have a choice.”

Port of Oakland has $12 Million Deficit