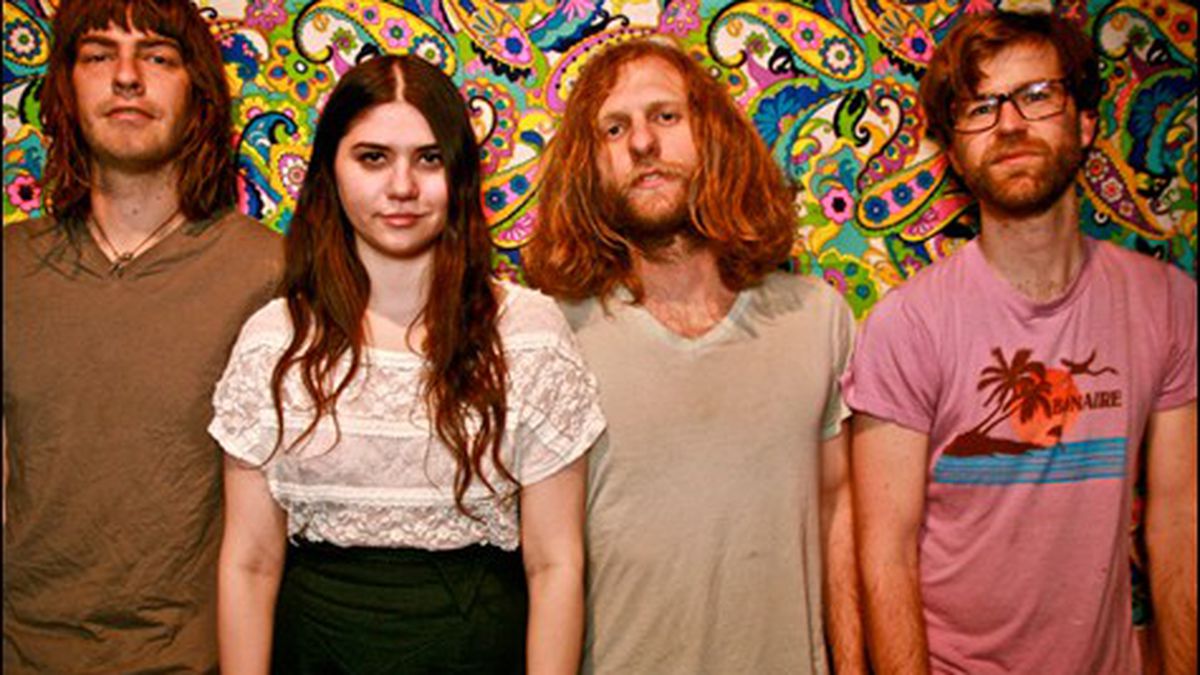 Matt Adams cut his first records in basements, and built his cult of personality as a loner.

Reclusiveness is a central theme in the lore of The Blank Tapes, a band from Oakland that exists in various iterations but really only has one core member. His name is Matt Adams. He’s a slight, tousled 31-year-old with long blond hair, a droopy mustache, and a goatee, which gives the impression that his face is always concealed behind a hairy curtain. It’s hard to even detect Adams’ expressions as they register on his face, owing to the fact that his mustache covers his mouth, his eyes seem to drift perpetually at half-mast, and his voice almost never wavers. He’ll name-check the instruments in his burgeoning collection with all the enthusiasm of someone reading a shopping list: “Mini piano, guitars, drum sets, some random percussion instruments — you know, from Brazil and all the other places I’ve been,” he said offhandedly, adding that he’s proficient in every single one.

That’s actually not an overstatement. Adams launched his career producing a spate of albums autonomously, in every sense of the word. On most, he’d handle all the instruments, overdubbing himself to create the illusion of a four-man band. He recorded many songs on eight-track cassette players — hence the name “The Blank Tapes” — and often worked out of sheds or basements in various Oakland apartments. He’d also use cassette players as a way to jot down ideas, hitting the “Record” button every time he’d improvise a cool lick on guitar, or find himself in the throes of a particularly potent jam session. Adams said he’s not a Luddite per se — he now owns an iPhone — but he definitely fetishizes old gear. “I like pushing ‘Play,’ pushing ‘Record,’ pushing ‘Rewind,'” he explained matter-of-factly. “I’d rather do that than have some digital interface and see the audio file in front of me.”

Primitive recording technology suits Adams’ style of music, too, since he traffics in older forms. Growing up in Orange County, he imbibed some contemporary grunge rock but mostly listened to light, bubbly Sixties bands like The Beatles and The Kinks. Thus, The Blank Tapes’ music sounds like a throwback to old-school psychedelia, with some bluegrass and country influences thrown in. The songs have beachy chord progressions, twangy guitar solos, and solid verse-chorus-verse structures. Even the vocal hooks sound old. The band’s current single, released on seven-inch vinyl via the San Francisco label 20 Sided Records, features a bright backup chorus by Indianna Hale and Kacey Johansing. Keep, keep, keepin’ on, they sing in two-part harmony, as Adams warbles about escaping the city and returning to a provincial home. The song, appropriately enough, is called “I’m Back.”

Adams said he’s always been fixated on older forms of music and the machines that produced them. His arsenal mostly includes instruments that were manufactured before 1970 — organs, an analogue delay effect called a space echo, and older guitars, even though his main axe is a Nineties-era Telecaster — and his songs incorporate all the signifiers of first-wave garage. He likes guitar riffs that jangle and melodies that resolve on major chords, and says that generally, those giddy, fuzzy, dated sounds are the kind that also please audiences. The themes of his songs, which are often autobiographical, show the singer yearning for simpler times and a more temperate environment than Oakland, where he resettled in 2003. In “My LA Baby,” he pines for suburban Los Angeles — and more importantly, for the girlfriend he left there. (He moved back there a few months ago, but frequently returns to the Bay Area.) In “I’m Back,” he sings about fleeing West Oakland for a sojourn in the Santa Cruz mountains.

He played it toward the end of a half-hour set at The New Parish last Wednesday, accompanied by drummer Will Halsey of the bands Ash Reiter and Sugar Candy Mountain. In this case, Halsey sung the background harmony, hitting the major thirds with just enough resonance to plump up an otherwise wire-thin band. Adams played an electric guitar, alternating lead and rhythm parts and occasionally slapping the strings to get the satisfying thwack of a percussion instrument. Audience members bobbled contentedly in barstools, and a few people swayed back and forth on the dance floor. Still, the bass was conspicuously absent.

Adams doesn’t mind paring down to the rawest setup possible when he’s touring, since it’s both more economical and logistically easier. In the process of consolidating his career he often gigged as a one-man band, holding a guitar and playing kick-drum with his foot — he even did a cross-country tour by himself. He says the current core of The Blank Tapes is about three people: either Halsey or his girlfriend Pearl Charles plays drums, he plays guitar, and D.A. Humphrey plays bass. But he likes touring as a duo, and he’ll happily go solo in a pinch. “I play to the room,” he said. “If it’s a bigger room, I’ll try my best to get a bigger band, but I don’t think these two-person shows are really lacking.”

On albums, he prefers to go it alone whenever possible. “Usually the records are me playing everything to get it just how I want it to sound,” Adams confessed. He’s always had a solid artistic vision and a particular way of executing it. Other band members seemed ancillary.

And in truth, Adams has long been an individualist. Or, at the very least, he’s gravitated to solitary activities — before discovering rock ‘n’ roll he drew obsessively in sketchbooks. The second of four siblings, he says he’s the only person in his family to seriously pursue music. Adams took piano lessons in grade school, learning most of the music by rote and forgetting it shortly thereafter. He stopped in middle school but picked up guitar a few years later and taught himself how to play. From there, it was easy to learn mandolin, banjo, and eventually shift over to percussion instruments. He played in a few bands during high school but always recorded on his own. Over the years, Adams has amassed a huge cache of music, including a nine-album discography (most of which is available on Bandcamp) and two hundred unreleased tracks that may never see the light of day.

Adams’ new LP, which will drop next year on Antenna Farm Records, marks a distinct turning point in his career. He’s now working with a notable indie label; his new songs are top-heavy with personnel; and he cut the tracks in a studio using ProTools, so they have an ultra-clean, contemporary varnish. Moreover, he’s gotten a taste of commercial success, having licensed a few songs for TV commercials in Brazil, and even garnered his first product sponsorship from Coconut Water. Adams has even altered his insistently crude note-taking methodology. Now he records new ideas using the voice memo app on his iPhone, rather than a portable cassette. The name The Blank Tapes hasn’t changed, but the raison d’être certainly has.

Yet Adams takes exception to all suggestions that he’s trying to modernize or turn his one-man project into an actual band. “It’s not a new phase,” he demurred, shortly before taking the stage at The New Parish. He was wearing a worn leather jacket and brown utility pants, and staring blankly at the small audience around him. When he got onstage and launched into the dry, earthy chords of opening number “Holy Roller,” audience members clamored around him. Adams gazed straight ahead, his hair draped protectively over his face.