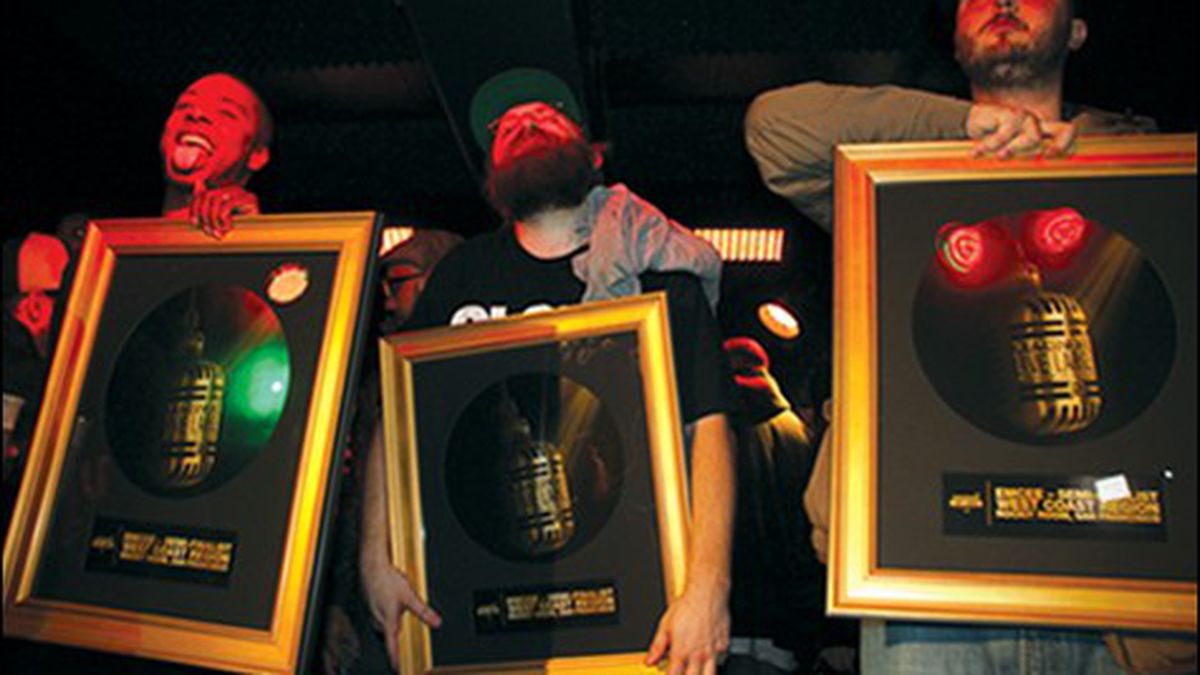 Local rappers shill for Magnum as they battle for notoriety.

Rappers have done amazing things for sales of Courvoisier and Hennessy Cognac, Prada and Gucci, Cristal Champagne (whose company director resisted the accolades), Alizé Liquor, certain types of high-quality purple weed, and Trojan Magnum condoms. At first blush, prophylactics might seem an odd addition to that list. They’re not exactly a luxury product, and hip-hop artists aren’t exactly known for championing safe sex. But then you have to consider the Magnum brand identity. Its slogan, “live large,” goes along with the genre’s priapic fixations. It connotes everything that rappers celebrate: wealth; a dissolute lifestyle; genitalia that’s as powerful and dangerous as an S&W revolver.

It’s unclear whether Magnum specifically targeted an urban demographic from the outset, or whether it just wanted to be the consummate dude’s condom. At any rate, parent company Church & Dwight watched Magnum’s popularity skyrocket, without any specific advertising campaign to abet it. It was coaxed along, in large part, by hip-hop artists like Ludacris, Lil Wayne, 50 Cent, and Eminem, all of whom helped cement the brand by name-checking Magnum in their lyrics.

When executives at Church & Dwight got wind of how these rappers had essentially turned themselves into corporate shills, they were beside themselves. Why not milk the unexpected advertising campaign for all it was worth? Last year, they recruited Ludacris to be the public face for a series of rap battles under the banner “Live Large Project.” The inaugural competition took place mostly online, with the winner earning $5,000 and a performance slot at the Atlanta hip-hop festival Birthday Bash. It was so successful that Magnum decided to expand this year, holding battles in Detroit, San Francisco, New York, and Miami.

What results, as evidenced by last Friday’s San Francisco edition of “Live Large,” is a weird alignment of the rap world and the condom world. Trojan had outsourced production duties to a smaller promoter called Bring It Back Tour, whose members hired several local rappers to be judges. Their ranks included Mac Mall, Zumbi of Zion-I, Z-Man, Prince Po, Opio, Boac, and OneBeLo. They sat on either side of the stage at Rockit Room, where the free event took place.

Zumbi and Z-Man carried notebooks. Mac Mall looked bored. The club was packed from floor to ceiling with underground hip-hop fans. Sprinkled among them were PR flacks, marketing representatives from Trojan, and safe-sex activists. The entire bar was covered in condomy schwag, including Fire & Ice Magnums sealed in a glimmering zip-lock wrapper.

“Everyone say ‘safe sex!'” yelled Philosophy, one of the night’s rap battle hosts (there appeared to be six of them). “Make sure y’all don’t get no babies in.”

The format was pretty straightforward: Three rounds, the first containing prepared material, the second all freestyle, the third all pre-recorded songs. Only during the freestyle round were contestants really required to incorporate the “Live Large” theme. The winner would be flown to Miami for Spring Fest 2011, at which he (all contestants were male, unfortunately) would perform alongside winners from the other three regions. As an added bonus, Bring It Back was offering a $1,000 cash prize to a special “fan favorite.” By local standards, it was a high-stakes battle. Twelve emcees participated, all of them cherry-picked and vetted by the tastemakers at Bring It Back.

For anyone expecting safe-sex and relationship raps, the night was vastly disappointing. “To survival of the spirit, my peck ends on point,” assured a rapper named Edgewise. Another contestant, Joe Cutter, heard that line and raised him one: “This shit could piss off the tip of my dick.” San Jose rapper Dirtbag Dan got off to a strong start, taking the stage in a hooded sweatshirt and baseball cap, inscribed with the word “Breezy.” He opened with a few warm words for the sponsor (“Yo yo, since we on some ‘live large’ shit, some gold standard time, son, ‘I’m gonna set the bar”), then ripped through a verse in double-time. Dan’s only overt nod to safe sex came when he characterized himself as “Mr. Fuck-Your-Face.”

Of course, some contestants treated the theme literally. “I got a gold star pack when I get in the sheet, with a chick in the B,” rapped Fredo, who managed to rhyme all his lines with “e.” “My dick’s big enough to fuck with this condom!” shouted Oakland rapper Lush One, throwing a Magnum into the crowd during the freestyle round. In his next two lines, Lush boasted an enviable talent for “burning other emcees like herpes.”

Some emcees used the words “Trojan condom” and the slogan “live large” as a jump-off for word association. “What’s up to my Trojan, I’m explodin’!” bragged a Modesto rapper named Cobalt 45. Others gave the word “Trojan” a lot of latitude, by referencing Trojan warriors and Trojan horses. “I didn’t go to USC, but I’m a Trojan man,” declared Oakland rapper Nocando, who originally hails from Los Angeles. He continued: “Live large, bend bars, and give me, like, six cars.”

Naturally, Dirtbag Dan had the coup de grace, combining the literal with the figurative: “What, you think my dick’ll fit in one of these? Yo, I’m on some average shit. Pull the Magnum out, and start smashing shit — I’m a pussy-smashing activist.”

Philosophy eventually had to weigh in and remind people of the event’s purpose. “We’re trying to be on some population control, damn it!” he shouted. “‘Cause there’s too many of y’all motherfuckers in here.”

Church & Dwight marketing director Dan Bracken didn’t seem to mind. He adamantly hyped the rap-condom partnership, and insisted that these emcees were the appropriate people to merchandize the Magnum product line. “Magnum is about living large, and living your life in a positive way,” Bracken said. “And who embodies that better than Ludacris?”

From his standpoint, it was a rhetorical question. Bracken professed heartfelt appreciation for the rappers onstage, whose relationship to Magnum, he insisted, was completely organic. Nonetheless, he left long before the winners were called, at around 1:30 a.m. In the end, Nocando placed third, and Dirtbag Dan took second. The winner was Richie Cunning, who found favor either because of a lyric he tried in the first round: “I never let the fickleness of new company comfort me.” In hindsight, the line didn’t make much sense — why would anyone feel comfortable with fickle company? But in a roundabout way, it accorded with the Trojan theme. If your company is new, or fickle, or at all discomforting, then by all means, use a condom.

Editor’s note: The original version of this article stated that Richie Cunning has neck tattoos. He does not.