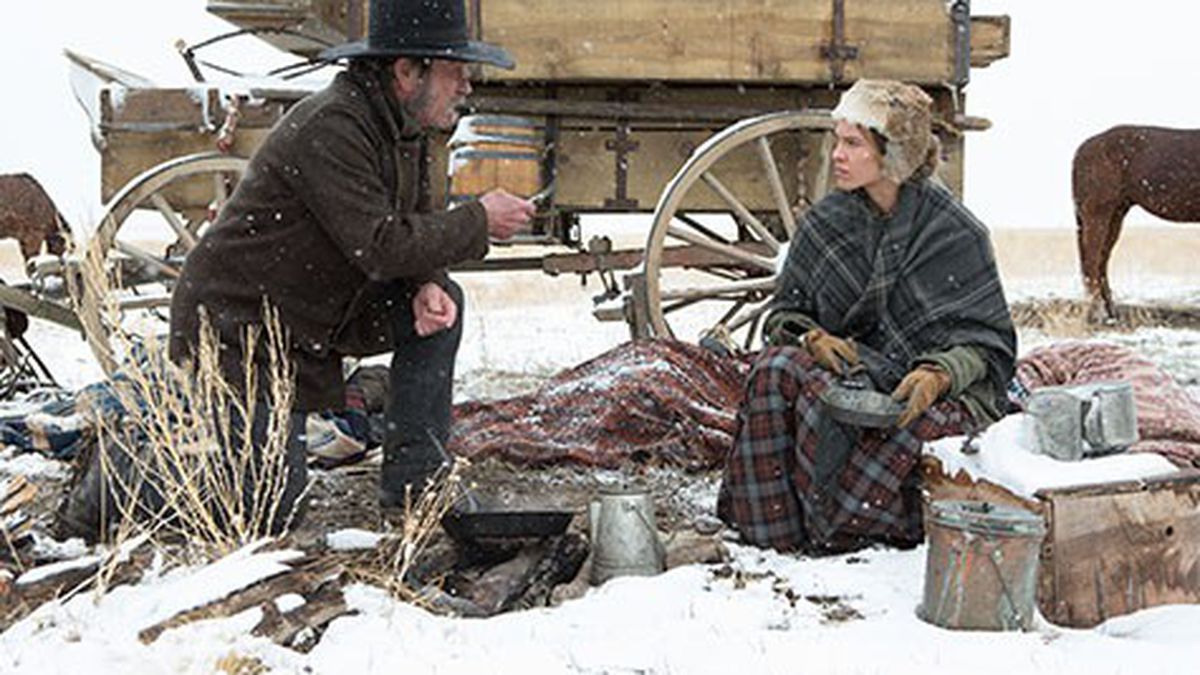 With all due respect to both actors, it’s abundantly clear that Tommy Lee Jones was the Channing Tatum of his day — back when TLJ was lighting up action scenarios such as Rolling Thunder (1977) and Jackson County Jail (1976). That is, a taciturn He-Man presence who nevertheless has the knack for making his dialogue count, and who gets choice roles to suit his talents. Whether Tatum (now appearing in deep character in Foxcatcher) can grow into the comparison in the long run remains to be seen. The Tommy Lee Jones of 2014 is a complex sumbitch indeed, as evidenced by his latest project, The Homesman.

The Homesman, adapted from a novel by proven western hand Glendon Swarthout (The Shootist, 7th Cavalry), fits securely into the “new wave” of ultra-realistic (read: surly and grubby) oaters, à la the Coen Brothers’ True Grit and No Country for Old Men; The Assassination of Jesse James by the Coward Robert Ford; Meek’s Cutoff, etc. The trappings include: No tight pants or gaudy shirts, no makeup for women, no change of clothes for dinner (or ever, in most cases), unwashed bodies speckled with tobacco juice, formal nineteenth-century language contrasting with vicious violence, and so on.

We recognize all that right away in the predicament of Mary Bee Cuddy (Hilary Swank), an unmarried female homesteader in the Oklahoma Territory in the 1870s. Solitary farmer Mary Bee makes a point of being as determined and able-bodied as any man, yet she longs for companionship and is not shy about button-holing one of the local bachelors (Evan Jones) with a proposal of marriage. The menfolk invariably turn her down, frankly citing the opinion that she is as plain as an old tin bucket. Mary Bee suffers the indignities stoically. It’s a new type of character part for Swank. Mary Bee’s pain radiates from her in waves.

A breakout of diphtheria in the territory has been accompanied by an epidemic of hysteria. Three frontier wives, upset by the deaths of loved ones, have been declared insane and ordered by the authorities to be rounded up and trucked to a Methodist mental institution in Iowa, in a converted prisoner wagon with barred windows. Upstanding churchwoman Mary Bee volunteers for the job and reluctantly accepts as her traveling companion a drifter and accused claim-jumper named George Briggs (Jones), whose job is to protect the women from marauders on their journey across the prairie. The three chained women are wild and unpredictable and the trip is long, arduous, and full of rude surprises.

Director and co-scenarist Jones excels at forced marches. In his superb 2005 Tex-Mex adventure The Three Burials of Melquiades Estrada, he played a rancher fulfilling a promise to a murdered friend by delivering his body to his home village in Mexico. Here, his character is neither as noble nor as trustworthy. Briggs is a classic Wild West ne’er-do-well, an army deserter and whiskey hound far more interested in Mary Bee’s promised reward money for safe passage than in the welfare of the inmates. Sitting around the campfire at night with Mary Bee and their passengers, Briggs’ tale of hunting down a band of Kiowa horse rustlers with his fellow dragoons tells us everything we should know about him. He will not be wronged with impunity.

Neither will Mary Bee, although her ill-treatment is due more to her gender than for any sin she commits. Women on the plains in that period led frightful lives of hard work and sorrow, punctuated by the threat of sexual assault from husbands or total strangers, any time, any place. Set awkwardly against that precondition is the ubiquitous religious fervor of the day — Mary Bee, the preacher (John Lithgow, ideally cast), the Iowa minister’s wife (Meryl Streep, in cameo), and even Briggs have lines of scripture on hand for every occasion. None of it influences their dirty deeds in the slightest.

Jones, Swank, the three actresses playing the inmates (especially Grace Gummer as Mrs. Sours), Lithgow, and Streep are joined by a picturesque cast of American faces: a high-handed Iowa hotel keeper (James Spader), an opportunistic hotel maid (Hailee Steinfeld from True Grit), kidnappers, hostile natives, tight-fisted shopkeepers, bloodthirsty settlers out for revenge, and ordinary drunken ruffians. The Homesman, with a screenplay adapted by Kieran Fitzgerald, Wesley A. Oliver, and director Jones, captures its times unforgettably. It’s a valuable addition to the cinematic literature of the western, and further reason why Tommy Lee Jones should run for president.