.The Hidden Costs of Fast Food

Fast food workers and supporters marched into a Wendy’s on International Boulevard in Oakland Tuesday chanting “Fifteen dollars and a union!” in an effort to gain awareness for the millions working long hours in the fast food industry for low-wages and no benefits. The demonstration coincided with the release of a new study by UC Berkeley and University of Illinois researchers that found that the low wages paid by fast-food companies make their employees reliant on national public assistance programs and cost taxpayers nearly $7 billion each year. 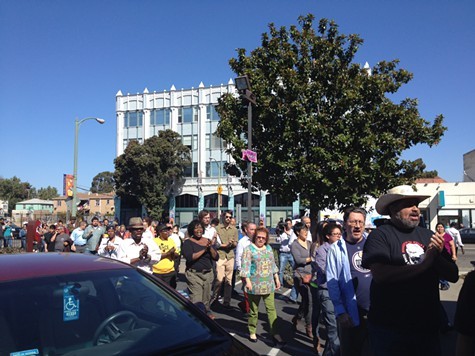 “We need to make a change. If you’re working and on public assistance, it’s wrong,” said Jason Hughes, who works at a McDonald’s in Fremont.

Hughes said he has been working 30 hours a week for $8.25 an hour for about a year and a half, but recently had his hours cut down to 22 hours a week. He currently uses Medi-Cal for health coverage, but does not want to rely on any other public assistance program. “I refuse to do it. I don’t want taxpayers subsidizing me,” he said.

According to the new study “Fast Food, Poverty Wages: The Public Cost of Low-Wage Jobs in the Fast-Food Industry,” 52 percent of fast food workers’ families are enrolled in one or more public assistance program, compared with 25 percent of the nation’s overall workforce. Spending for Medicaid and the Children’s Health Insurance Program makes up $3.9 billion of the total burden on taxpayers.

Hughes led other workers and members of community organizations like the East Bay Alliance for a Sustainable Economy into the Wendy’s, where they insisted that the manager fax a letter demanding better wages and benefits for workers to the corporate headquarters. Demonstrators then began calling the headquarters of Wendy’s, McDonald’s, and Burger King to demand to know why their business models necessitate the exploitation of workers.

“You can’t live in the Bay Area on a maximum of $18,000 a year,” said Berkeley Assemblywoman Nancy Skinner at the press conference following the demonstration. “We need everyone in our society to be paid a wage where they can live decently.

In California, public assistance program costs for the families of low-wage fast food workers total $717 million. This includes those who are employed full-time, since more than half of the families of workers employed 40 hours or more still rely on welfare programs.

“While these public assistance programs provide an important and needed safety net for our citizens, these costs are subsidizing fast-food companies’ low wages,” said East Bay Congressman George Miller in a statement issued following the study’s release. “That’s why a fair wage is not about asking for a handout. Rather, it’s about valuing work. And it’s about growing the economy from the bottom up by increasing working families’ purchasing power.”

Next ArticleFrom Richmond to the Rainforest