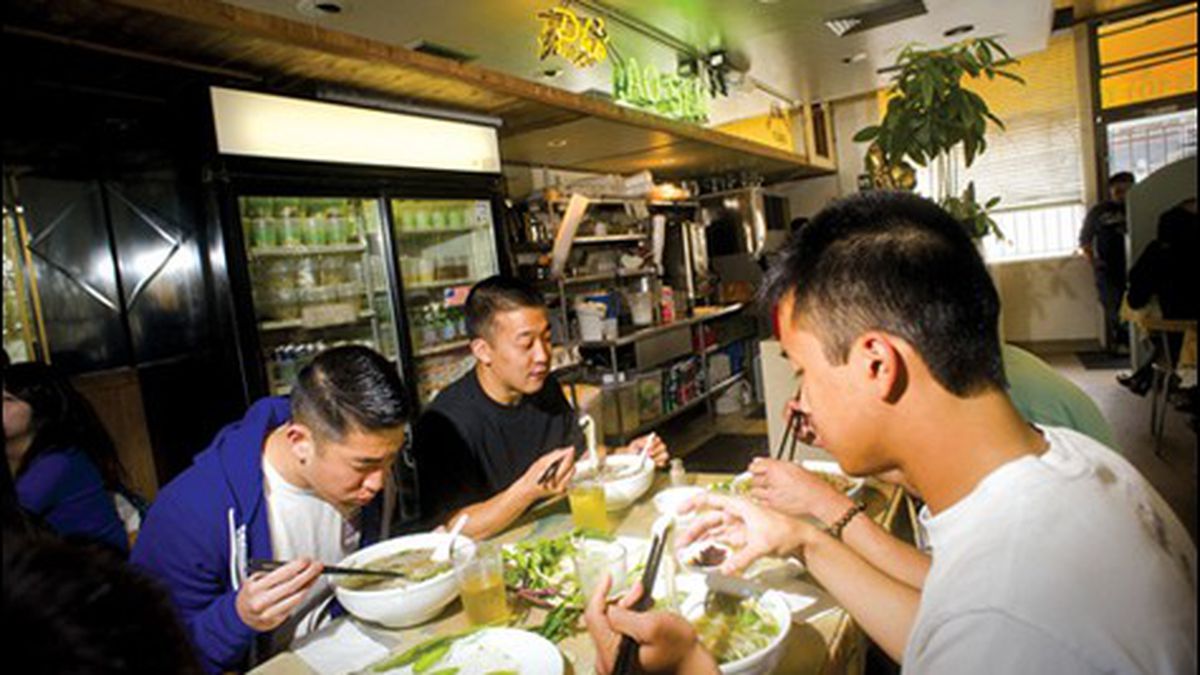 The old-guard restaurant-dining culture in the East Bay has been blown up, and replaced by food trucks and auteur cooks.

A white plastic hanger dangles shiny panties in a south-facing window, as car speakers make the bass line for Too $hort’s “Blow the Whistle” sound like it’s being pumped through six inches of turgid, ropy bong water. At a faded laminate table behind Pho Ao Sen — more parking strip than outdoor dining pad — young Viet guys blow smoke from cigarettes near a stack of obliterated pho bowls, a cloud of post-noodle contentment in the air. One of them busts me looking, scowls as if to spit, “What you staring at, bitch?”

Ah, Oakland, how I’ve missed you.

Here where International Boulevard meets the equivalent of the tidal marsh at the south end of Lake Merritt — the spot where East Oakland begins — things still feel the same as when I stopped writing about East Bay restaurants almost exactly two years ago.

Now I’ve returned, to an East Bay food scene that — like the one here at Ao Sen — hasn’t changed a bit, and like the one that’s coalesced around the Fox Theater in Uptown, couldn’t be more different if Oakland had been firebombed, FEMA’d, and rebuilt. So here, as my first column back, I offer this most general of Google Earth overviews of East Bay dining, from the perspective of someone who’s spent 24 months focused on the scene west of Treasure Island.

Although, seriously, the word “dining” is now as culture-, age-, and income-specific as “gourmet.” Your mom, she dines: makes a reservation, picks out an outfit, tips well. Is there an East Bay dining scene? There is not, any more than there’s a San Francisco dining scene. Anyone who’s eaten out since, oh, since sun-dried tomatoes slipped from avant-garde to Olive Garden, at least intuitively knows that the old-guard restaurant-dining culture has been blown up, fractionalized into a shower of smaller, cheaper, and more personal catering options. Food trucks. One-off pop-ups. Informal food vendors setting up folding tables on the sidewalk. Even bar seating in traditional restaurants. So lay “dining scene” to rest. Call it an eating scene.

Obviously that’s a national trend. How has the East Bay kept up? First, food trucks. If the regional equivalent of UNESCO existed, Fruitvale would be a dead cinch for culinary heritage site. The thirty-year lonchera boom that yielded at least one taco truck on damn near every block of International from 25th down to 45th — carving out a protected mobile vending zone, thanks to the organizing efforts of Emilia Otero — is the unacknowledged innovator that’s made organized food pods like Off the Grid even possible. Amazingly, it’s still there, still thriving, still necessary for the house painters, landscapers, moms, high school kids, and hyper-Yelping truck geeks that made it essential in the first place.

Of course, if you’ve come to food trucks through the upscale expressions burning up shows like the Tyler Florence-fronted The Great Food Truck Race, chances are you’ll be all, What the hell? Fruitvale’s loncheras are anti-novelty, valuing cheapness and consistency over the self-expression of an owner who calls himself “chef.”

And Fruitvale’s lonchera zone is still a source of pride for its natural constituency, even if the wider media hasn’t given it the attention it deserves. A couple months ago I was sitting by myself in one of the plastic patio chairs at the Guadalajara torta stand Pipirin on 34th Avenue, barbacoa juices running down my forearm, when a bulky guy in a soccer jersey lumbered out of his chair and came my way. Uh-oh. Dude wants to fuck with me.

“This is the best,” he said with a smile, his thumb suddenly upright. “I drive all the way from Antioch.”

I caught a whiff of something similar the other night in Berkeley, at the unofficial first night of Off the Grid: half a dozen food trucks parked on North Shattuck just south of Rose. A charming white-haired lady — with the kind of sunburn you get from long hours spent thinning baby lettuce plants out back behind your Craftsman bungalow — smiled and offered a sweep of her arm at the crowds lined up for falafel, lumpia, and cupcakes.

“Look at this,” she said. “Can the Gourmet Ghetto get any better?”

In 2007 the mojo of East Bay food power still coursed through Berkeley. It was the place where young chefs still set up kitchens, the Cali-bistro shimmer of a place like Downtown (now Revival) still had enough juice to power a nod from Michael Bauer, and Alice hadn’t yet been burned by dual-front campaigns waged by left- and right-wing defenders against the nanny state, from Anthony Bourdain to the New York Post.

Berkeley has always served up a big helping of didacticism with its potato-lovage pizzas and warm goat cheese salads (see: Alice), and that’s only intensified with the spread of veganism and a shrinking perimeter of food sourcing. (Big nod to Gather‘s Sean Baker, who simultaneously caters to advocates of both, in a way that seems to call for tolerance across will-not-eat lines.)

No surprise that since ’07, the center of power has shifted south to Oakland, city of pho, barbacoa tortas, Ethiopian kitfo, Korean black goat stew, and Daniel Patterson, who in 2009 told me that the regulatory climate in San Francisco had made it all but impossible to open an upscale neighborhood restaurant there. What does Oakland get? Plum, Patterson’s thesis on what’s possible from a Cal-Cuisine bistro in a post-Chez Panisse world.

The cook as auteur, mining an intensely personal vision: It was the flavor of San Francisco restaurants — and food trucks, and pop-ups, and bakers — in 2010, and it’s the flavor of Oakland now, from James Syhabout, whose Hawker Fare is a reconstruction of Bangkok street food, to Josey Baker, who runs a bread CSA out of Pizzaiolo, to Sarah Kirnon, the Hibiscus chef who’se tweaked the Bajan cooking of her grandmother in Barbados.

Even Alice Waters seems to know what’s up. “I think something remarkable is happening in the Bay Area,” Waters said at a press conference at Twitter headquarters in March, as reported by the Chronicle‘s Inside Scoop blog. “People are opening restaurants now not to make money, but to have a wonderful way of living their lives. That wasn’t always the case.”

Back near Pho Ao Sen on International Boulevard, I’ve arrived: a new soul food takeout place where the owner’s trying to use as much organic stuff as possible. There’s another customer waiting, a Vietnamese woman who owns the nail shop across the street. I ask her how the food is.

“It’s good,” she says, in a tentative voice I take to be wariness to engage. And then — maybe she figures this white guy asking stupid-ass questions is new in town — she sets me straight. “Oakland has real good food, you can’t go wrong.” Blow the whistle.

John Birdsall
Previous articleAre Alameda’s Firefighters too Powerful to be Reformed?
Next articleWednesday Must Read: Brown and GOP at Budget Impasse; Huge Snowpack Could Cause Flooding
18,645FansLike
0FollowersFollow
66,486FollowersFollow