.The Dumpling of Champions 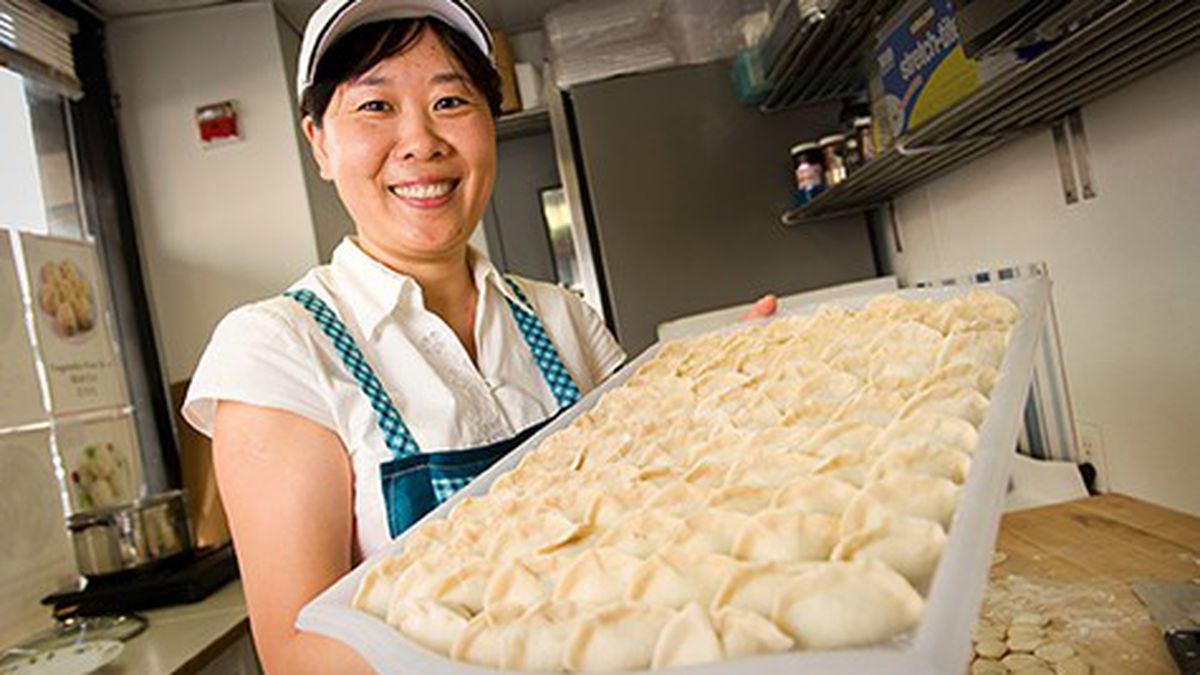 Dumplings were the convenient comfort food of my Chinese-American childhood — a freezer-ready after-school snack or lunch for a lazy Saturday. Years later, when I spent the tail end of my twenties living in Taipei, one of my favorite neighborhood spots was a place called Fatty Chou’s, where five US dollars would buy two dozen pork dumplings (jiaozi): dinner for two.

As ubiquitous as they were dirt-cheap, Taipei’s dumpling houses occupied roughly the same culinary niche that’s filled, in the Bay Area, by taquerias and inexpensive pizza joints. Here in the East Bay, there isn’t much of a dumpling culture. Plenty of Chinese restaurants serve dumplings, but usually as an appetizer rather than the main course — often, it seems, as an afterthought. So I was excited to hear about Tian Jin Dumplings, a takeout window in Oakland’s Chinatown that specializes in dumplings and other northern Chinese xiaochi, or “small eats.”

The friendly owner, Amy Liu, hails from Tianjin, a city to the southeast of Beijing that’s known — like much of northern China — for its heavily wheat-based cuisine: its dumplings, noodles, and buns of all shapes and sizes. But Liu’s shop has more in common with a street stall than a full-service restaurant. The only seating is a couple of stools and two small plastic tables on the sidewalk. The entire menu consists of about six items; half of them will likely be sold out if you arrive after 1 p.m.

But what Tian Jin Dumplings lacks in amenities and breadth of offerings it makes up for in good old-fashioned deliciousness. The handmade dumplings, in particular, are the best I’ve had in Oakland — arguably the best in the East Bay.

Boiled dumplings — even good ones — are humble and utilitarian; they lack the sexiness of Shanghainese soup dumplings and the understated elegance of high-end shumai. They are also, in their way, the perfect convenience food: meat, vegetable, and starch all contained in one small, two- or three-bite bundle. Liu makes two versions of pork dumpling — one with cabbage and the other with Chinese chives — that come fifteen to an order, which turns out to be just the right amount for lunch.

Upon first taste, the pork-and-cabbage dumplings didn’t seem like anything special. But their virtues started to become obvious about two or three dumplings in: their juiciness, the slight crunch of the vegetables, how the filling had just the right amount of ginger and scallion. The chive version was even better — wonderfully fragrant and made up of more chive than pork.

In both cases, the best part was the handmade wrappers, which were thin and delicate. None were ripped or stuck together, nor did they have the slimy texture you get at less careful restaurants. Each order came with a little tub of bracing black vinegar, the traditional dipping sauce in Tianjin.

Liu also does a brisk business in frozen dumplings, and I plan to keep my freezer well stocked henceforth. If you plan ahead, you can try one of the shop’s unconventional specialty dumplings, which come fifty to an order and require at least a day’s advance notice. The most interesting of these had a delicate flounder-and-celery filling with just a hint of white peppercorn heat and no “fishy” flavor to speak of. The finely chopped celery added an herbaceousness, as well as a lovely light-green hue.

But by far my favorite dumplings were the beef-and-carrot ones, which gushed with meaty, sesame-oil-tinged juices when I bit into them — they were rich without being greasy, and savory enough that no sauce was needed.

Besides dumplings, Tian Jin Dumplings also sells a handful of other dough-based street snacks, including a few kinds of bao, or steamed buns. I wasn’t enamored with the bargain-priced ($0.65) pork-and-vegetable bun, which I found a bit bland and dry — I prefer the juicier, oversized bao at Shan Dong, a couple blocks away. Sometimes Liu makes a chive-filled vegetarian version (which costs a nickel more), but it wasn’t available during any of my visits.

Better than the bao, which tend to sell out by lunchtime, are Liu’s savory baked shaobing, listed as “biscuits” on the menu. These are flaky, chewy, multi-layered breads that you can hold in one hand — the English muffin of Chinese cuisine, if you will, and perfect for making an improvised breakfast sandwich. You can get your shaobing with a smoked boiled egg, which Liu will slice in half and stuff inside the biscuit if you ask. I found the yolk a little bit dry, but the eggs — smoked with Chinese rock sugar — had a nice, subtle smoky flavor. One of these egg “sandwiches” is probably one of the tastiest $1 breakfasts in Oakland.

Truth be told, Asian street food is my favorite kind of breakfast, and my favorite breakfast item at Tian Jin Dumplings is the “pancake fruit” (a misleading translation; Liu had to clarify on the menu that it has “no fruit”). Jianbing guozi is the Tianjin variant on a popular savory Chinese street snack: a huge, egg-coated mung-bean crepe that’s brushed with soybean paste and, if you request it, chili sauce, then stuffed with Chinese fried cruller (the guozi, or “fruit”), crunchy pickled mustard stems, and fresh cilantro. The flavors are simple and homey, but so, so good. It’s the perfect thing to warm you up on a chilly morning.

All of these Tianjin-style breakfast items would be even better washed down with a glass of fresh soymilk, northern China’s morning beverage of choice, a decent version of which I’ve yet to find in the Bay Area. But for now, Liu is constrained by the tininess of her space. As it is, you might find me at Tian Jin Dumplings’ tiny storefront a few mornings every week, picking up a jianbing with extra chili sauce. I can’t think of too many finer ways to start a day.

Next ArticleMid-Week Menu: Syhabout and Lamoreaux Team Up on The Dock, Authentic Bagel Company Plans an Expansion, and Marrow Tables Dinner Service