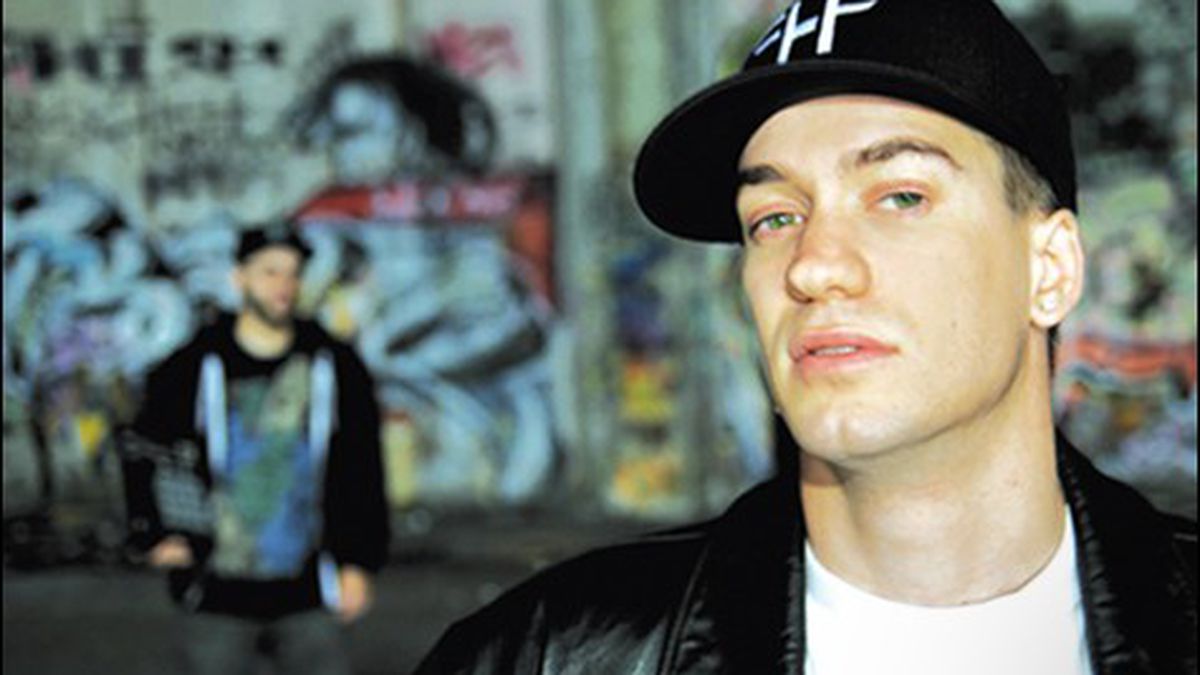 The Def Poetry of Rafael Casal

Another Oakland poet ventures into hip-hop.

It was about midnight, and Rafael Casal had just finished band practice near Jack London Square. Now the slam poet-turned-rapper was buying tacos from the truck at International Boulevard and 1st Avenue. While Casal and fellow emcee Daveed Diggs waited, they tried to converse with an aging, inebriated man next to the truck. The man talked in circles, mumbling about the Raiders winning the Super Bowl, Troy Aikman, and the idea that this reporter looks like a professional bowler.

When we hopped back in Diggs’ beat-up Honda, loaded with steak and tortillas, Casal and Diggs cracked up.

“Our music is about tryin’ to capture shit like that,” Casal said. “That’s the Town experience.”

By the time he was 18, Casal was appearing on HBO‘s Def Poetry Jam while touring, performing, and teaching nationwide with YouthSpeaks, a respected San Francisco-based nonprofit that empowers young people through spoken-word performance. He is a two-time Brave New Voice Poetry Slam Festival champion. As a teen, Casal dropped out of Berkeley High School but earned his diploma through an alternative independent study program.

Casal moved back to Oakland this summer, after spending most of the last three years as creative director at the University of Wisconsin-Madison‘s First Wave Spoken Word and Hip-Hop Arts Learning Community, a scholarship program administered by the school’s Multicultural Arts Initiatives office. He earned his degree in Madison by working for tuition instead of a salary, and he still travels there as an artist in residence.

In July, the 25-year-old released The Bay Boy Mixtape with Diggs, who co-founded the Getback Productions crew with Casal and playwright Chinaka Hodge. These days, Casal is cultivating his reputation as a rapper, releasing a new song every Tuesday on YouTube, producing videos for other local artists and putting the finishing touches on his third full-length solo LP, due out in January. He’s the type of rapper Oakland needs: smart, musically savvy, speaking words worth listening to.

At the rehearsal studio, Casal listens quietly while the drummer, DJ, and keyboardist practice for an upcoming gig. He looks solemn until a particularly cool drum groove excites him. His narrow face lights up, his hands start moving. When he speaks, his words machine-gun out with the same speed and natural rhythm as his raps.

Casal’s music ranges widely, from up-tempo funk- and soul-based beats that make you want to dance around your living room to intense, mainstream-sounding party tracks. He samples Amy Winehouse and The Beach Boys. It’s fair to say most of his lyrics fall under the “socially conscious” umbrella, à la Mos Def or Common.

That outlook informs the bulk of his work. It’s particularly resonant in “Misogyny,” a song that allows Casal to psychoanalyze the thug mentality that influences a lot of men’s behavior. Feel like you’re trying to trick us to open up/And letting our guard down is something hard to give up/And none of us could be whipped, ’cause it strips us of our thug/And our ego comes equipped with the meanest mug/So you’re stuck with misogyny.

But Casal doesn’t short sell the raw side of hip-hop culture. He had a viral hit in 2009 with “Bay Area Slang Top 100 (The Grinch Song),” where he cleverly and speedily rhymed through a hundred Bay-based terms — from “murkin'” to “cup cakin'” — in just three minutes.

Casal says he’s adapted his writing to fit the rap form, which sometimes means more grandstanding, cursing, and R-rated subject matter. Unfortunately, his shifting image has alienated some of his (at this point larger) poetry fan base, and he’s had to accept losing some fans to grow as a rapper.

“It’s a difference in medium, and some people are very stuck in how they want to receive the art they’re getting,” Casal said. “Other people are invested in me and what I’m doing, and they can ride it out however I present my art.”

As he’s gotten older, Casal’s music has turned darker and more melodic. His second album, Monster, explored various meanings of that word, particularly within the process of approaching and defining adulthood. He says his new album is a continuation of the same ideas.

“I think life got real,” Casal said as we listened to a new track called “Dreamer,” with a haunting chorus that shows off Casal’s singing. “A lot of crazy shit happened when I was younger, but I didn’t have a lot of perspective on what I was seeing. You get older, and you want to talk about it, and it’s not light.”

While we talk, Casal checks his Blackberry nonstop, a combination of jotting lyrics (writing by hand is too slow, he said) and monitoring traffic on his Facebook, Twitter, and YouTube pages. He posts frequently on Twitter, and he makes a point to communicate directly with his fans across multiple web platforms.

He’s putting the pieces in place for the as-yet untitled album to drop harder than Monster. For one, Casal is living in the Bay Area to promote it, whereas Monster came out while he was in Wisconsin. This time he’s using all original beats — no sampling — so the songs can get on the radio and iTunes. (Monster and Bay Boy are both downloadable for free at GetRafael.com). He’s also using a new producer, Detroit-based Jay Fab, who has worked with Lil Wayne and is finishing a contract with Rick Ross‘ Def Jam label. The first single will be released in late November.

“I understand what it means to package yourself the right way, and so this is the first attempt at that,” he said.

He never seems to stop working, writing, connecting, creating. When I finally got up to leave the apartment he shares with Diggs and Diggs’ brother at 1:30 a.m., their pit bull, Jasmine, had fallen asleep against my arm. Casal said I didn’t have to feel pressured to go.