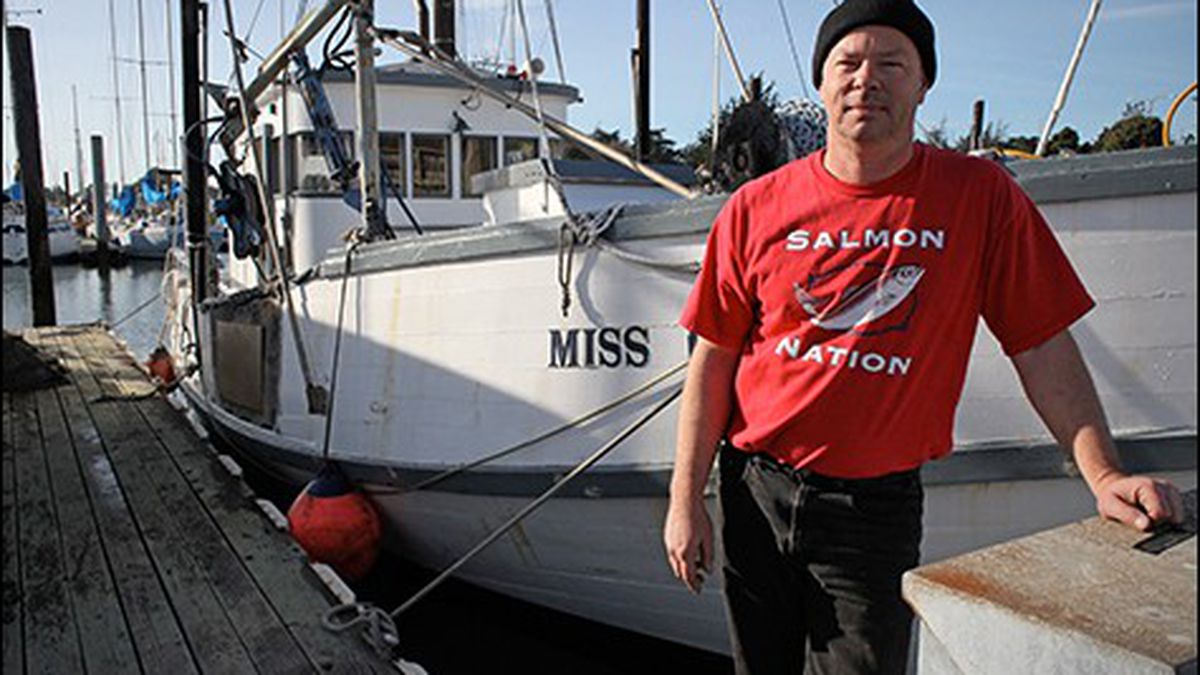 The historic dry spell likely will result in far fewer fish, as environmentalists and fisherman argue with federal scientists over whether to truck baby salmon to the bay.

Last summer, Berkeley fisherman Mike Hudson enjoyed some of the most profitable salmon fishing he had seen in the past decade. Dense schools of big fish congregated in the Pacific Ocean along the Bay Area’s coastline through the spring and summer, with numbers up from previous years. For Hudson and other commercial trollers, fishing was fast and money was easy as buyers offered sky-high wholesale prices. Recreational sport fishermen, too, had a memorable summer, and for thousands of people up and down the coast, from the boat dock to the barbecue, the summer of 2013 was one for celebration.

But the drought has dampened the party. Central Valley river levels have dropped precipitously in the past months because of a record-breaking dry spell, destroying thousands of nests — or redds — containing fertilized Chinook salmon eggs laid by spawning fish last fall.

Hoping to prevent further damage to the Chinook’s population, environmental groups have called on the US Fish and Wildlife Service to boost the survival rates of salmon born at one of the agency’s major fish hatcheries near Redding by trucking the finger-sized fish downstream and releasing them directly into San Francisco Bay. Most years, the Coleman National Fish Hatchery — located on Battle Creek, a tributary of the Sacramento River — releases millions of salmon smolts directly into the river.

But trucking the salmon would move them safely past the Sacramento-San Joaquin River Delta, where powerful irrigation pumps kill countless small fish every year. And trucking would thus lead to greater numbers of adult fish in the ocean in coming seasons. It also would help the salmon smolts escape predators, like birds and nonnative black bass, which may take advantage of low river levels during the drought to prey on small fish.

“We need to get the salmon past these trouble zones,” said Dick Pool, a Concord fishery activist and the founder of the conservation group Water4Fish. “Trucking them is critical in a drought year like this.”

Highway transport of baby hatchery salmon from their birth tanks to the sea is not a new concept. The state’s Department of Fish and Wildlife annually trucks about three-quarters of the 16 million salmon it raises in four Central Valley hatcheries and releases them into San Pablo Bay, where the fish are held briefly in floating recuperation cages before being freed. Operators of these hatcheries take the eggs of wild salmon that enter the facilities, fertilize them with sperm, and rear the young for several months.

But the US Fish and Wildlife Service has never embraced the trucking system. The agency produces about 12 million baby fall-run Chinook salmon every winter and releases them directly from its hatcheries in April. Thousands of these fish survive to adulthood and return to the same areas to spawn — but Pool, Hudson, and others in the fishing industry believe this is not enough. They say much greater numbers would survive each year — and contribute to the coastal fishing economy — if the agency assisted the young fish with a ride past the perilous delta.

“Fishermen know, and we agree, that they’ll get a greater catch in the ocean if the salmon are transported [to the bay],” said Dan Castleberry, an assistant regional director with the US Fish and Wildlife Service.

But there’s a reason, Castleberry said, that his agency prefers not to truck its fish downstream: Baby salmon that do not migrate downriver on their own tend not to return to the same place when they spawn three years later. That’s because they miss out on an important component of their development called “imprinting,” in which an olfactory recognition of the water that a young salmon was born in becomes stamped in its brain. This scent memory is what allows salmon to make their legendary spawning migrations and even locate the precise tributary where their own parents spawned.

When such imprinting does not occur, salmon will spawn in almost any watershed they encounter. Scientists call this “straying,” and it’s bad for two main reasons, according to Scott Hamelberg, project director at the Coleman National Fish Hatchery.

First, the hatchery needs returning fish to remain operating; the more salmon born at Coleman that stray and spawn somewhere else, the fewer eggs the hatchery will have to work with.

And second, the genetic integrity of the Central Valley’s many native strains of Chinook is threatened when fish from one tributary stray and end up spawning in another stream. “The Central Valley’s fall-run fish have become dramatically homogenized,” Hamelberg said. “We want to keep them coming back to the place where they were born in order to reassert the genetic distinctions that give them their adaptive evolutionary differences. You can’t get there if you keep mixing the gene pool.”

But Water4Fish’s Pool feels the federal Fish and Wildlife Service is making a costly tradeoff. “You get less straying, but also less fish,” he said.

John McManus, executive director of the Golden Gate Salmon Association, points out that 2013’s fall salmon run has already taken a heavy hit due to low river levels caused by the drought. Biologists estimate that 40 percent or more of the eggs laid and fertilized in the Sacramento River died, while at least 11 percent perished in the American River.

Now, he said, a bumper fishing season is unlikely for 2016 unless Coleman hatchery’s fish are trucked to the bay. He acknowledged, however, that heavy rain this spring just before the salmon are released could boost their odds of survival in the river by creating fast, turbulent, murky water, which works as a smokescreen against predators. “That could give those fish a big shot of water that would wash them down the river,” he said. In fact, the US Fish and Wildlife Service on Monday released nearly 200,000 salmon born last fall near Shasta Dam with the hope that last weekend’s heavy rains would expedite their journey to the ocean.

The Fish and Wildlife Service participated in the trucking program from 2009 to 2011, when the Coleman hatchery delivered 10 percent of each year’s juvenile fall-run Chinook to the bay for release. The action was an emergency measure intended to bolster fish numbers following the severe crash of the Central Valley’s Chinook runs, which bottomed out in 2009 at about 40,000 spawning adults — about an eighth of the Sacramento River’s historical average and the worst fall-run return ever recorded.

Many of those fish were marked with tiny coded wire tags, which biologists frequently use to track salmon. Subsequent recovery of these tags from adult salmon in the ocean indicated that the fish trucked to the bay experienced far greater survival rates that their counterparts released into the river.

However, coded wire tags retrieved from adults that spawned in the Central Valley’s rivers proved what biologists predicted would happen: “95 percent of the salmon we trucked down to the bay went and spawned somewhere else,” Hamelberg said.

El Cerrito resident Marc Gorelnik, a member of the sport fishermen’s group Coastside Fishing Club, feels that other factors that directly threaten Central Valley salmon populations — like the pumping of delta water for farmland irrigation — should be addressed before federal officials make efforts to preserve the salmon’s genetic differentiations.

“If we don’t resolve the first- and second-order challenges that are threatening salmon in the rivers, what’s the point of addressing these third- and fourth-order challenges?” Gorelnik said.

He feels that the 12 million Coleman hatchery smolts will be wasted if they are released into Battle Creek. “The river is low, warm, and clear,” he said. “Those fish are going to be decimated.”