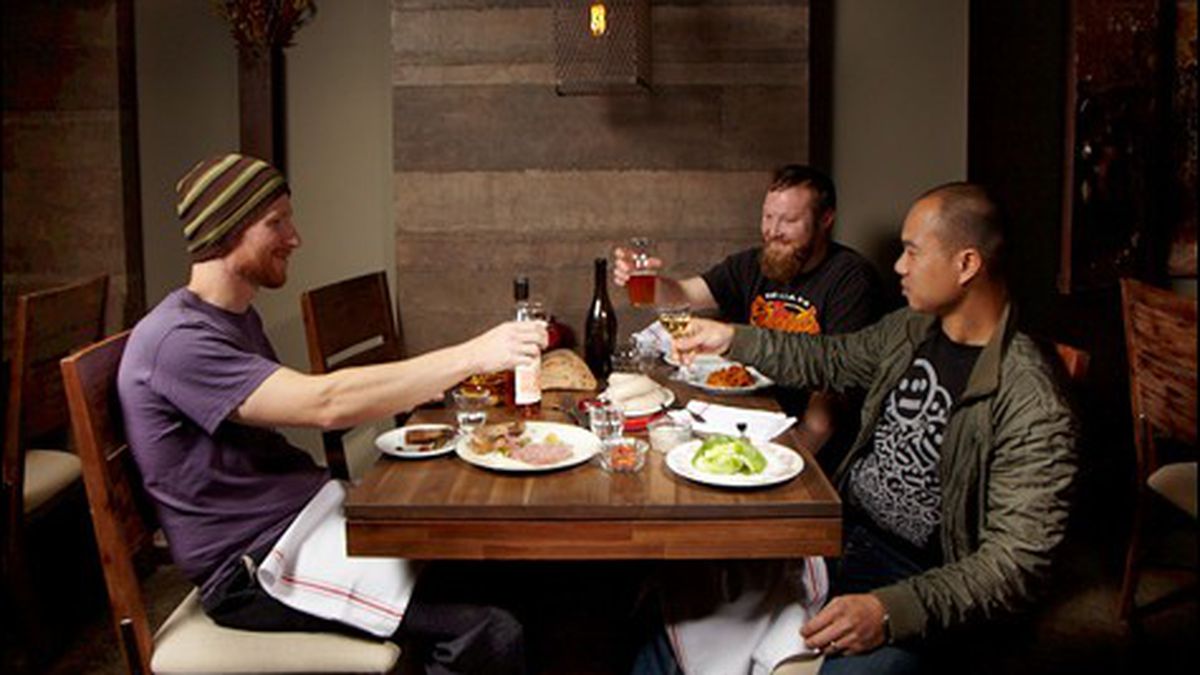 When I was a kid, Thanksgiving seemed like an effortless affair. I’d wake up late, spend the day puttering around, and by the time the first dinner guest arrived, like magic (i.e., thanks to my mother) the table would be piled high with food: stuffing, mashed potatoes, a big ol’ turkey — all the American staples — but also Chinese sticky rice, steamed fish, and “mock chicken” made with yuba sheets.

The holiday looks a little different when you’re the one tasked with preparing the meal. Over the years, I’ve served my share of overcooked birds and, on several occasions, planned a more elaborate meal than my modest cooking skills could handle. Any holiday that revolves around unapologetic gluttony will always rank among my favorite days of the year, but for the host, it can be one of the most stressful as well.

This year I sought guidance from some of the best chefs in the East Bay — folks who crank out large quantities of delicious food on the regular. I wondered, what secrets do they possess? What do chefs cook when celebrating Thanksgiving at home with their families? And which of their treasured holidays recipes would be feasible for me, a lowly home cook, to add to my repertoire?

Rest assured, then: Whether you want to make sure this year’s turkey comes out perfectly juicy or you’re getting an early start on planning that over-the-top Christmas or Hanukkah feast, our experts have got you covered.

Any chef worth his or her salt will tell you that one of the keys to running a successful restaurant kitchen is organization. That’s the first thing Elizabeth Sassen, the chef and co-owner, along with her husband Fred Sassen, at Piedmont Avenue’s Homestead, teaches her line cooks — to plan ahead and make sure their prep lists are squared away so that they know exactly what task needs to be completed at any point in time.

When you’re cooking a big holiday meal, prior planning is the only thing that’s going to keep you from “running around like a chicken with its head cut off,” Sassen said. For Thanksgiving, she writes a menu at least a week in advance, maps out a detailed plan of attack on the calendar (since many dishes can be cooked several days ahead of time), and does the bulk of her grocery shopping early — preferably right when the store opens, so she doesn’t have to fight the crowds.

An organized game plan also means you’ll be able to put together a more ambitious, thoughtful meal. For instance, if you want to brine your turkey (or other large hunk of meat) — as detailed below — you’ll need to start the process at least a day or two before the meal.

Early planning allowed Kim Alter, the chef at Uptown Oakland’s Plum, to put together one of the most memorable Thanksgivings of her early twenties. At the time, she was living in San Francisco, which she describes as an “orphan city” — a place where a lot of the people had moved far away from their respective homes and families. As a young restaurant cook, Alter loved hosting friends who were “orphans,” and one year she called all of her guests and asked what Thanksgiving dish had the most sentimental meaning to them. She made a version of each guest’s sentimental favorite, and that night, amid many bottles of good wine, everyone shared the story behind their dish.

“Whether the food came out good or not, it was the thought that mattered,” Alter recalled.

Alas, if you’re browsing the Internet (or flipping through your local alt weekly) in search of Thanksgiving recipes at this late stage of the game, congratulations — you’ve mastered the art of procrastination, and it may be too late to make more than a few minor tweaks to your menu. Still, often those small details can be the difference between a middling holiday dinner and one that’s truly great.

For many Americans, the centerpiece of the Thanksgiving table (and, often, for Hanukkah and Christmas feasts as well) is a roasted turkey, which is perhaps a curious tradition given how dull the dish can be when it isn’t prepared well.

When it comes to roasting turkey, there are generally two schools of thought — those who brine (i.e., immerse the bird in a saltwater solution before cooking) and those who don’t. Most of the chefs I spoke to fell in the pro-brining camp, although the contents of their brining solutions varied. James Syhabout, chef-owner of Commis and owner of Hawker Fare and Box and Bells, favors a brine infused with the flavors of Southeast Asia (fish sauce, crushed ginger, and star anise), whereas Marrow’s Jon Kosorek uses a slightly more traditional Western formula (brown sugar, cinnamon sticks, and allspice). Whatever the exact specifications of the brining liquid, the principle is the same: Brining helps keep the turkey juicy and allows the seasoning to penetrate into the meat more evenly.

As for the actual roasting of the bird, our experts differed in their approaches. Syhabout likes to cook his turkey in a blistering hot oven for half an hour, after which he lowers the temperature for the remainder of the roasting time; Sassen does the opposite — she cranks up the heat at the very end to get the turkey’s skin to crisp up. Kosorek, on the other hand, advocates a “low and slow” approach: He’ll put the turkey in a 225-degree oven first thing in the morning and allow it to cook for the better part of the day.

Whichever approach you take, invest in an oven probe — which costs as little as $20 — and pull the turkey out of the oven when the thermometer hits 5 to 10 degrees below your target temperature. (The bigger the bird, the more residual heat retention there will be.)

Several of the chefs interviewed, including Syhabout, admitted that they’ve never actually cared much for turkey — at least not when it’s served the traditional American way. Syhabout recalled that when he was growing up in Oakland, Thanksgiving was always a big potluck where most of the foods were Asian — winter melon soup, steamed rice, assorted curries and chili pastes, rice vermicelli, green leaf lettuce, and fresh herbs. There was always a roast turkey, too, but instead of eating it with stuffing and gravy, everyone would spoon the various curry sauces onto the meat and build their own little Thai-style lettuce wraps.

“Of course the most prized part of the turkey is the bones,” Syhabout said, explaining that he’ll use the bones and all of the leftover scraps of meat to make a really good jook (or rice congee) the following day.

All About the Sides

“I’m a side-dish girl,” Alter said. So, when it comes to Thanksgiving, Alter, too, has never had much interest in turkey. Instead, she loves deviled eggs and green beans and all different kinds of casseroles — those are the parts of a holiday menu she gets most excited about.

This year, Alter is attending a Thanksgiving potluck hosted by the vegetarian pastry chef Bill Corbett, and so she plans to make a vegan version of a bagna càuda — an Italian hot vegetable dipping sauce. She’ll use miso instead of anchovies (the traditional base for the sauce), and she’ll serve the bagna càuda with a mix of raw and charred brassicas — cauliflower, broccoli, romanesco, and the like. It’s the perfect dish to serve for the kind of Thanksgiving meal Alter said she enjoys the most — everyone hanging out in the kitchen, snacking and drinking wine all day.

Sassen passed along a recipe for duck scrapple, a dish she’s served at Homestead. It’s a cheffy twist on a rural Pennsylvania staple that is traditionally made by slowly simmering assorted pork scraps and innards, which then get molded into a loaf, cut into slices, and fried. Homestead’s version uses somewhat-harder-to-procure duck organs, but Sassen said you can easily substitute the innards that come bagged up inside the cavity of your Thanksgiving turkey. Once fried, Sassen said, the dish reminds her of nothing more than “crispy gravy” — a perfect accompaniment to turkey, stuffing, and mashed potatoes.

Speaking of mashed potatoes, I’d be remiss not to pass along one of Kosorek’s favorite tricks: In addition to a generous amount of milk, cream, and butter, he adds some freshly grated nutmeg and a squeeze of lemon juice — not so much that you’d taste either ingredient, but enough to help bring out the natural flavor of the potatoes.

A Note on Tradition

Interestingly enough, none of the chefs interviewed have cooked a strictly “traditional” holiday meal in years. Sassen said that as much as she loves a traditional Thanksgiving meal, the past several years she and her husband have always hosted Thanksgiving dinners with a specific culinary theme — last year it was all Indian food. Alter said that most years she’ll serve the traditional side dishes, but instead of turkey she’ll do a big crab and lobster boil.

On the other hand, Sarah Kirnon, chef-owner of Miss Ollie’s, does cook all the traditional holiday foods — but the foods traditional to Barbados, where she grew up, rather than the United States. For Christmas, she’ll often roast a pig for her neighborhood, and she’ll make jug jug, a dish — often likened to Scottish haggis — that’s made mostly of pigeon peas and cornmeal.

As it turns out, the closest Bajan equivalent to Thanksgiving is Independence Day, November 30. For that holiday, the traditional dish is a kind of steamed dessert called a conkie, which Kirnon likened to a sweet tamale. To make the filling, you take giraumons (a pumpkin native to the Caribbean) and sweet potatoes and grate them using a special grater that has extraordinarily tiny holes.

“You’re grating all day,” Kirnon said. “You make them and you gift them.”

Perhaps Syhabout, who himself eschews the constraints of the traditional American holiday table, summed it up best: “Cook what you want to eat. The status quo says to cook turkey, pie, and stuff like that,” he said. “But if you’re not into turkey, you don’t have to cook turkey.”

It’s worth noting, too, that holidays like Thanksgiving and Christmas are among the few days in the entire year that a professional chef doesn’t have to cook. When I spoke to Syhabout, he said that no one in his extended family had signed up to host this year’s Thanksgiving feast yet, and he wasn’t planning on volunteering.