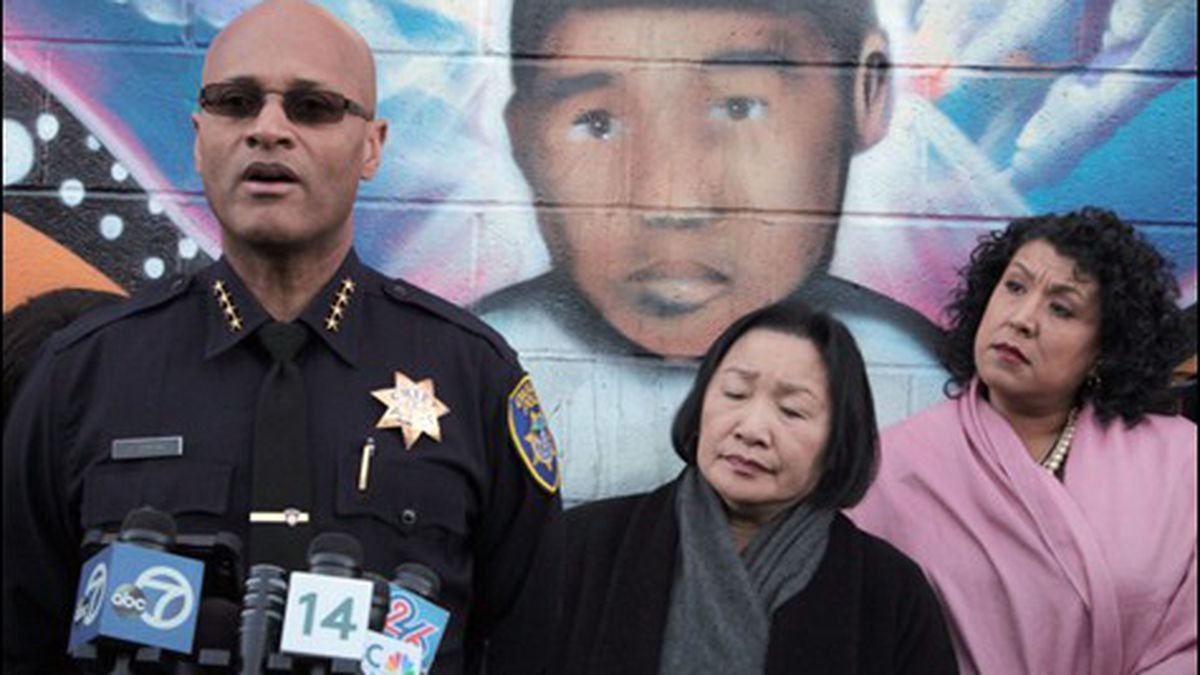 The Carlos Nava Case May be in Trouble

A key witness in the killing of the three-year-old boy is refusing to cooperate with prosecutors because the person's identity and involvement in the case have become public.

Of the 250-plus homicides in Oakland since the beginning of 2011, few caused more outrage than the killing of 3-year-old Carlos Nava. The young boy was murdered in a drive-by shooting in East Oakland on August 8, 2011. And unlike the typical homicide case in Oakland, police responded with an intense manhunt for the killers. In the following days, police arrested two suspects — one in Pittsburg and the other in Las Vegas. Prosecutors then charged both men, Lawrence Denard and Willie Torrance, with murder. Both are scheduled to appear in court next month to hear the evidence against them. However, court documents and interviews show that the case may be in jeopardy because a key witness is refusing to testify.

The witness, whom the Express is not identifying because of concerns over the person’s safety, broke off contact with the Alameda County District Attorney’s office in mid-January because the person feared retaliation for being involved in the Nava investigation. Court documents obtained by this reporter indicate that the witness is furious with authorities because “paperwork” detailing the person’s identity and role in the case is “on the streets.”

Court documents and interviews also reveal that the witness may have good reason to be concerned. The lead investigator, DA Inspector Lou Cruz, is a former Oakland police homicide detective who previously oversaw a case in which two witnesses were murdered after he revealed their identities to a homicide suspect during an interrogation.

In addition, the identity of the witness in the Nava case was publicly available for more than a month — apparently because of a mistake by the DA’s office. According to court documents, Deputy District Attorney Steve Dal Porto filed for — and received — a subpoena to arrest the reluctant witness and compel the person to testify. But the request that Dal Porto filed in court contained the witness’ name, telephone number, and address, as well as the name and address of the person’s mother. The subpoena was put in the public court file on January 17, even though such information is usually kept sealed. Sometime late last week or early this week, the subpoena was removed — after I told the DA’s office that it was in the public file.

If the witness continues to refuse to testify because of what has transpired, it could imperil the prosecution’s case against Denard and Torrance. Denard is accused of firing the shots that killed Nava, while Torrance faces murder charges for allegedly driving Denard to and from the shooting. Court documents allege that both men are members of the 65th Avenue ‘Vill gang. Both men are scheduled to appear in front of Judge Carrie Panetta on April 8 for a preliminary examination in which the judge will decide whether there is enough evidence for the case to go to trial.

The reluctant witness, who has ties to the neighborhood that the 65th Avenue gang claims as its own, was at the scene when Carlos Nava was killed and two men, Jerome Williams and Robert Hudson, were wounded by gunfire. The day after the shooting, the witness spoke to police and picked Denard out of a lineup as the shooter. However, attempts by authorities to contact the witness in recent months have proven fruitless. On November 12, Inspector Cruz tried to contact the witness at the witness’ mother’s house. Cruz then returned on January 14 and attempted to serve the witness with a subpoena, but was unsuccessful. Cruz left his business card at the home.

As of Monday of this week, the witness was still at-large. If taken into custody, the person would be held as a “civil defendant” and housed separately from people detained on criminal charges. It is not clear how documentation of the witness’ involvement in the case originally became public. California law bars defense attorneys from providing defendants with the addresses or telephone numbers of witnesses that the prosecution plans on calling to testify. In addition, in homicide cases involving gangs, a witness’ identity typically is not publicly revealed until the witness is called to the stand to testify in a preliminary examination or a trial.

Eleven years ago, Cruz was the lead detective in the homicide investigation of Michael Scott. At the time, Cruz was an OPD homicide sergeant and Scott was suspected of murdering 26-year-old Eugene Abraham on 31st Street just off Martin Luther King Jr. Way. Two witnesses, Willie Gilbert, 20, and Chance Grundy, 21, both saw Abraham get shot. They were then tracked down by Cruz and his partner James Rullamas.

According to lawsuits filed in federal court by Grundy and Gilbert’s families, Cruz and Rullamas played recordings of both men to Scott during an interview at Santa Rita Jail, and informed Scott of the witnesses’ identities and cooperation with law enforcement. Rullamas, it should be noted, is the OPD sergeant responsible for botching the investigation of Scott Olsen, the Iraq War veteran who was seriously injured by police during an Occupy Oakland demonstration (see “Disturbing New Evidence about OPD,” 10/10/2012).

Court documents indicate that after Cruz and Rullamas talked to Scott, the two witnesses, Gilbert and Grundy, began receiving threats in November and December 2001 over their involvement with the Abraham investigation. Cruz also was aware of Scott’s homicidal intentions toward the men because of recordings he had made of Scott’s outgoing phone calls from Santa Rita. In a telephone conversation on September 16, 2002 between Scott and a woman named “V,” Scott spoke about how “Chance [Grundy] told everything” to the police about the Abraham murder. Later in the conversation, Scott used a phrase that sounded like it came straight out of The Godfather: “Chance needs to sleep with the fishes with a weight ties around his neck.” Cruz listened to recordings of this conversation and made notes of Scott’s remarks, court records show. Cruz also noted a January 22, 2002 conversation in which Scott referred to Gilbert as a “mark,” a common slang term in Oakland for target. The veteran homicide investigator later testified that he had never heard the term “mark” before, and interpreted it to mean “witness” or “punk.”

About a week before a February 2002 preliminary examination in which Grundy was supposed to testify against Scott, Grundy was murdered in West Oakland. Less than a month later, Gilbert was gunned down in East Oakland. Attorney John Burris, who represented Gilbert’s family, said that the saga was one of the most disturbing cases he has ever handled, with retaliatory shootings later claiming another half-dozen victims in the city’s notorious Ghost Town neighborhood.

On June 3, 2002, Scott was convicted of murdering Abraham, and of attempting to dissuade four witnesses who were to testify against him. The murders of Grundy and Gilbert remain unsolved.

The civil suit filed by Gilbert and Grundy’s families alleged that Cruz and Rullamas knew about Scott’s intentions to harm both witnesses. But US District Court Judge William Alsup refused to allow the Gilbert part of the case to go to trial because Cruz had told Gilbert that he should stay with relatives in Sacramento. Gilbert complied and went to live with his grandmother there. But he then returned and stayed with his father in East Oakland before he was murdered.

However, Judge Alsup did allow the part of the case involving Grundy’s death to proceed to trial under a section of federal law that covers state-created dangers to individuals. According to Fred Smith, an associate professor at UC Berkeley’s School of Law, plaintiffs like the Grundy family face a steep burden in proving that a municipal agency was deliberately indifferent to the danger it created for someone who was then harmed by the actions of a third party.

After a contentious trial, the jury ruled in favor of Cruz and the City of Oakland in October 2004. However, Professor Smith noted that Judge Alsup’s decision to even allow a trial was extremely rare and reflected the seriousness of Cruz’s actions. “It’s really difficult to understate just how unusual Judge Alsup’s order allowing this to go to trial is,” Smith told me.

Burris and Pamela Price, who represented the Grundy family, came away from the case with serious concerns about the treatment of witnesses by local law enforcement. “I think they’re putting these kids in danger in gang cases,” said Burris. “The DA and the police have the responsibility to engage in legitimate, protective activity.”

Price believes that the Gilbert and Grundy murders and the subsequent federal trial were missed opportunities for Alameda County law enforcement to take major steps in reforming the treatment of homicide witnesses. “My team and I walked away from the case feeling like if you’re a witness to a crime in Oakland, you shouldn’t talk to police because you’re taking your life into your own hands,” Price said. Grundy’s family didn’t only seek monetary compensation, they wanted meaningful changes to policies governing how OPD and the Alameda County DA deal with witnesses, Price said. The failure to protect people who come forth in violent crimes, Price said, is a major factor behind Oakland’s notoriously low homicide-clearance rate. “How do we expect police to solve crimes if people don’t cooperate?” Price said. “It is a vicious circle, and the police didn’t take the steps to break this circle.”

In the years since Grundy and Gilbert were killed, local law enforcement has been more proactive about shielding some witnesses from harm. In 2011, OPD Sergeant Rick Andreotti was the lead investigator in the murder of Jason McGill and the nonfatal shooting of another man in East Oakland. Andreotti interviewed the wounded man and then arrested a suspect, Jason King, for the shooting. While King was in custody, Andreotti listened in on his phone conversations and uncovered a plot in which King offered to pay another inmate $7,000 to have the witness killed. Andreotti notified the DA’s office, which placed the witness under heightened protection. The sergeant also accompanied the witness to court. King was convicted of first-degree murder on August 18, 2011.