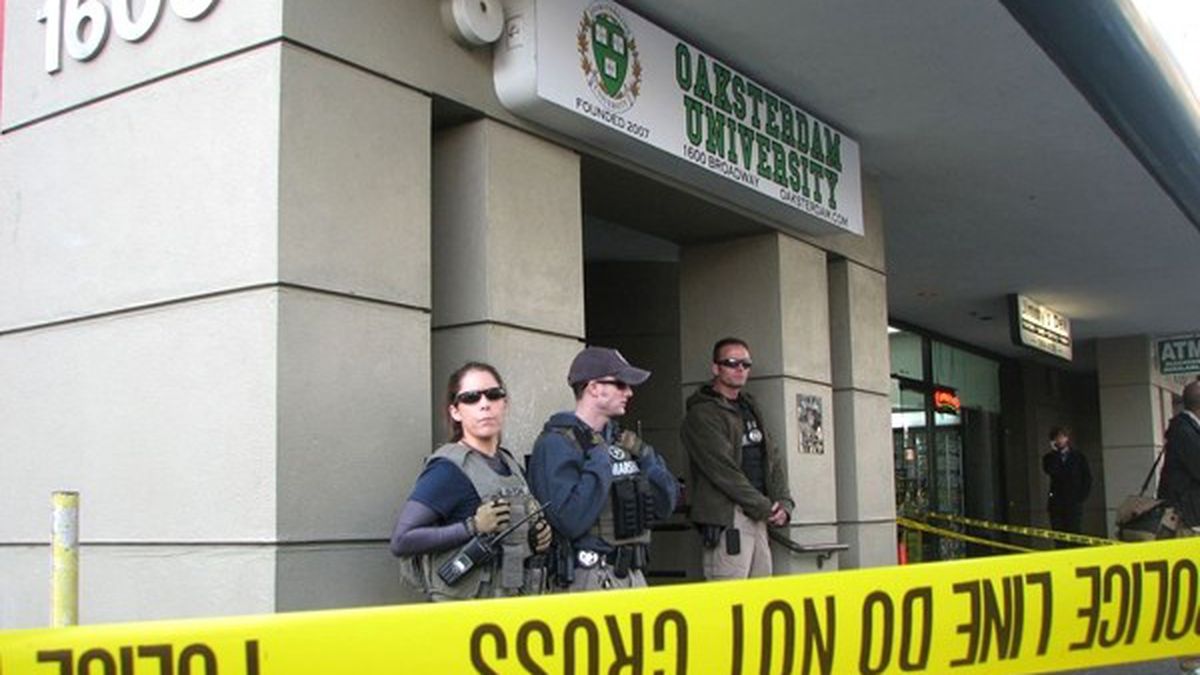 The feds detain Richard Lee and raid his respected medical pot businesses in a brazen move that may backfire.

An unprecedented federal raid at Oaksterdam University this week may become a public relations windfall for the pot legalization movement. On Monday morning, US Marshals, packing clips of automatic rifle rounds, stood guard alongside armed Internal Revenue Service and Drug Enforcement Administration agents, underneath the well-known “Oaksterdam University” sign at 1600 Broadway in Oakland.

Over the course of the morning, fifty to one hundred activists heckled them, shouting “Shame!” and “DEA, go away!” Garbage trucks and FedEx drivers honked in support. As of press time, one protester had been arrested by an Oakland police officer.

Federal officials raided Oaksterdam University along with several other locations owned or affiliated with Prop 19 founder Richard Lee: the former dispensary location of Coffeeshop Blue Sky; the new site of the dispensary at the Oaksterdam Museum; the Oaksterdam Gift Shop; and Lee’s apartment near Lake Merritt.

Executive Chancellor for Oaksterdam University, Dale Sky Jones, said Lee — a wheelchair-bound, Texas-born Libertarian — was “woken up by people with guns” Monday morning. “He was detained, but not arrested,” she said.

Reports stated that three others were detained and released. IRS and DEA spokespeople said Monday that search warrants for the raids are sealed, and would not comment further. While the cause of the raids is not clear, Lee’s history with the federal authorities indicates that the raid is an escalation of an ongoing conflict.

In October, US Attorney Melinda Haag forced Lee’s city-permitted cannabis dispensary Coffeeshop Blue Sky to relocate, stating that it was too close to a school. Lee promptly moved a couple doors down, then moved again to the site of Oaksterdam Museum on 18th Street and Broadway, about four blocks away.

“[Haag] set a line in the sand. If you were within 1,000 feet of a children’s area, she’s going to come after you,” said David Goldman of Americans for Safe Access San Francisco.

“Shutting down Coffeeshop Blue Sky was part of the crackdown. I wouldn’t doubt [that this was retaliation for him staying open],” said former Prop 19 co-organizer Jeff Jones, Dale’s husband. “They’re sending a message.”

But Debby Goldsberry, a local activist and High Times Freedom Fighter of the Year, disagreed: “The federal government started having it out for Richard Lee when he got so close to legalizing cannabis with Prop 19.”

Oakland Councilwoman Rebecca Kaplan didn’t know what the charges were, but said dispensary regulation in Oakland had succeeded, and that Richard Lee is an asset to public safety. “He’s been an exemplary community member,” she said.

Oakland City Attorney Barbara Parker also condemned the raid. “Fifteen years ago, the voters of California declared medical cannabis legal in this state. I call on the federal government to respect California’s state and local laws that allow safe access to medical cannabis,” she said in a statement. “I strongly oppose federal raids and prosecutions of Oakland businesses that are complying with state and local laws and regulations and paying their fair share of taxes.”

Jeff Jones said the raid would make a martyr of Lee, and further amplify local ire with federal law enforcement.

Until this point, the six-month old federal crackdown seemed carefully calculated to avoid searing images of oppression. Hundreds of letters were sent to landlords, and numerous dispensaries closed. There have been a handful of raids, but few activists caught anything on tape. There isn’t any footage of masked, jackbooted agents carting away grandpa and grandma for pot.

Now, there are images of feds blocking the door to mere information about the plant. Using Twitter and Facebook, activists’ “raid response” teams in Oakland made the raid a lead story. “This is how Oakland does it,” Goldsberry said.

California NORML director Dale Gieringer said, “I think people are going to be jazzed up.”

“There’s no way around this. This is front and center news. How many fucking cameras are here? These are live feeds. This is satellite,” Jeff Jones said. “[Lee’s] going to be the front of this, because if they don’t take him into custody, they’re not going to shut the fucker up. He only gets louder.”

“Rich Lee is a leader of this movement. He is a major and potent voice for change,” DeAngelo said. “This is — from my point of view — the most significant federal raid that there has been.”

“I think there is going to be a big reaction to it,” said Oakland resident Alex Fatemi, on his way to work Monday morning. “Just look at it already,” he said, pointing to all the news trucks. “This is instant. Once the word gets around, I’m sure a lot of people and activists are going to have another reason to rally. There’s a lot going on besides this, too. … There’s definitely going to be some marches.”

Corrections for the Week of June 3

Free Meals for Vets in Berkeley