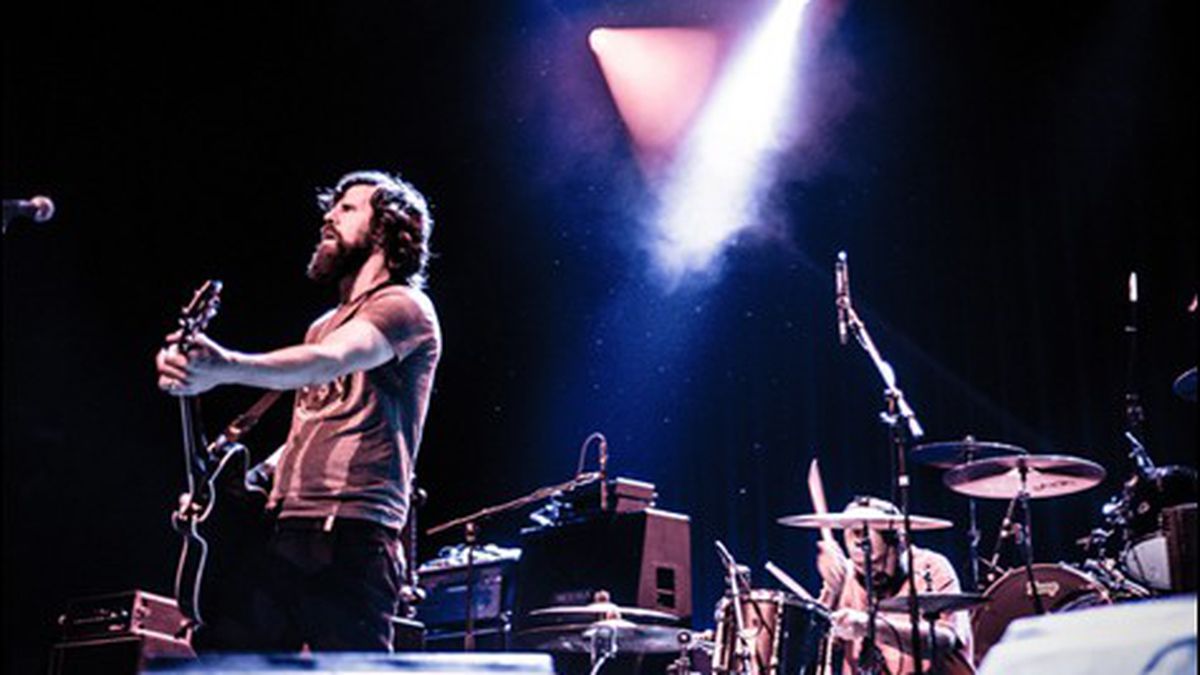 Container Ships depresses — but the band is looking up.

The first thing that struck me upon listening to Container Ships, the brand-new album from local heavy band Kowloon Walled City, was how utterly depressed it made me feel. The opening song, “The Pressure Keeps Me Alive,” begins with a stark, simple, repeated downtuned riff, played at the pace of someone who’s nearly given up. When the bass and drums come in, the whole thing lumbers along like a massive machine starting up its engine for some grim end. Even though I consider myself someone who likes things that are depressive, after a brief listen, I had to press stop.

The album’s downer quality, it turns out, was entirely purposeful — and merited, according to Kowloon Walled City vocalist/guitarist/producer/concept-guy Scott Evans. Because, in the three years since the band released its promising debut, Gambling on the Richter Scale, which put the San Francisco foursome in the national (albeit, underground) spotlight, the members have endured their fair share of challenges. Among them: Lead guitarist/integral songwriter/dear friend Jason Pace left (due to burnout, said Evans), which almost derailed the entire project; the subsequent addition of new guitarist Jon Howell (who also plays in Tigon), which, while rejuvenating the band, also set back the writing and recording of the new album; Evans, despite his band’s relative success (like being asked to open for Sleep at The Fox Theater in June), became nonetheless jaded with music and plagued by adult-related what-am-I-doing questions, in addition to developing a relatively debilitating throat injury, called vocal process granuloma, that threatened his very career as a screaming frontman, not to mention his ability to read bedtime stories to his kids; and drummer Jeff Fagundes, just a few weeks before the band was to record Container Ships, was attacked outside the band’s Tenderloin practice space and suffered a concussion, which almost stalled the already-somewhat-stalled recording schedule for its sophomore album.

So, the members of Kowloon Walled City have reason for sounding a little gloomy. And, as Fagundes points out, they’ve never exaclty been the soundtrack for a birthday party.

“Everything in this band is challenging,” Evans noted on a recent Sunday night at the band’s practice studio. “We’re not young. When I was 25, I had a lot of time to do shit. And now I don’t, and no one does.” Coordinating touring with everyone’s schedules can be a daunting task, he said, mentioning that this year the band had to turn down an offer to play Total Fest in Missoula, Montana due to such time constraints.

“When writing was going so slow, it was like, fuck, are we ever going to wring a record out of ourselves here? And then I was in physical pain. Jesus Christ. I think that all kinda contributed. I wasn’t bummed about my life or anything, I think I was just bummed about playing music, and also about being old,” Evans added, laughing. (Note: In this case, “old” means no longer in their thirties — except for Howell.) Hence, the resulting “bummer jams,” as bassist Ian Miller called them.

Yet despite these challenging circumstances — or, perhaps, because of them — Container Ships is actually the sound of a triumphant band. Evans’ vocals somewhat miraculously withstood the recording process; Fagundes also recovered in good time, allowing them to stay on schedule; and Howell’s enthusiastic presence reinvigorated the songwriting.

Sure enough, after I pressed play again, I heard that there’s far more nuance — and purpose — in all this downtuned sludgy sadness. The title track begins with a bit of dissonant feedback and distortion, setting an eerie tone for a bleak landscape. It’s one of my favorite moments on the entire record. About five minutes in, the song delves into an instrumental interlude that crescendoes into territory that’s damn near noise-poppy, before falling back into an abyss of heaviness.

“Jon is such a strange guitar player,” said Miller. “The way he approaches the instrument and writing is so weird and great, it brought a whole new dimension to stuff and allowed us to head off in a direction that I don’t think we would have gone otherwise.” For example, “Wrong Side of History” begins with a swirling bit of post-rock-ish guitar interplaying with a syncopated beat, and a shreddy, noisy guitar solo breaks up the otherwise pulverizing weight of “50s Dad.”

But Evans remains responsible for the band’s core ideas, as well as how they turn out in the final product (he’s been the band’s producer since the beginning). To that end, the individual instruments are more defined, the guitar tones are more “jangly,” there’s more spaciousness in the songs, and there’s an overall “less blown-out,” “gnarly” sound. So when guitars and bass are slogging along in the low end, the drums step up and slap you in the face. Evans’ voice shows zero signs of holding back; his shouted screams have the kind of ferocity that makes you feel like he’s working something out. (Lyrics address various world-is-fucked issues.)

Continuing the trajectory from Gambling on the Richter Scale, Container Ships also contains more subtle injections of melody, which add to its emotional depth. “We’re playing with more melody than we’ve ever done before,” said Miller, who called the band’s first EP, Turk Street, “anti-melody.” After all is said and done, these songs have a tendency to massage your subsconscious into submission.

Overall, Container Ships isn’t a major departure from Kowloon Walled City’s past work, but it does reflect an intentional change of pace. Evans noted the album’s sound was also the result of being on bills with extremely heavy bands, and wanting to do something different. “What are you going to do, like, out-heavy Thou or Batillus?” Evans asked rhetorically. “It’s not a contest, we just do our own thing but … for whatever reason it felt like that well had run slightly dry.”

According to Miller, the album is also a reflection of the band’s inner tension: Evans’ bummer tendencies; Fagundes’ desire to rock out; and Miller’s inclinations to inject melody and pop hooks. “It’s a fight; it’s this tension that runs through everything,” he said.

In this case, all the struggle seems to have paid off. Container Ships, which is being released by Brutal Panda Records, has already excited folks at Pitchfork, Brooklyn Vegan, NPR, and Decibel Magazine. The band is playing a couple dates in the Pacific Northwest this week, where it has a sizable fanbase, but Miller said he and his bandmates have been so focused on getting the record out by the end of this year that they haven’t yet scheduled a hometown release show.

In the meantime, Evans said he’s actually looking forward to writing another record.

Federal Budget Cuts Will Cause More People to Go Hungry This...