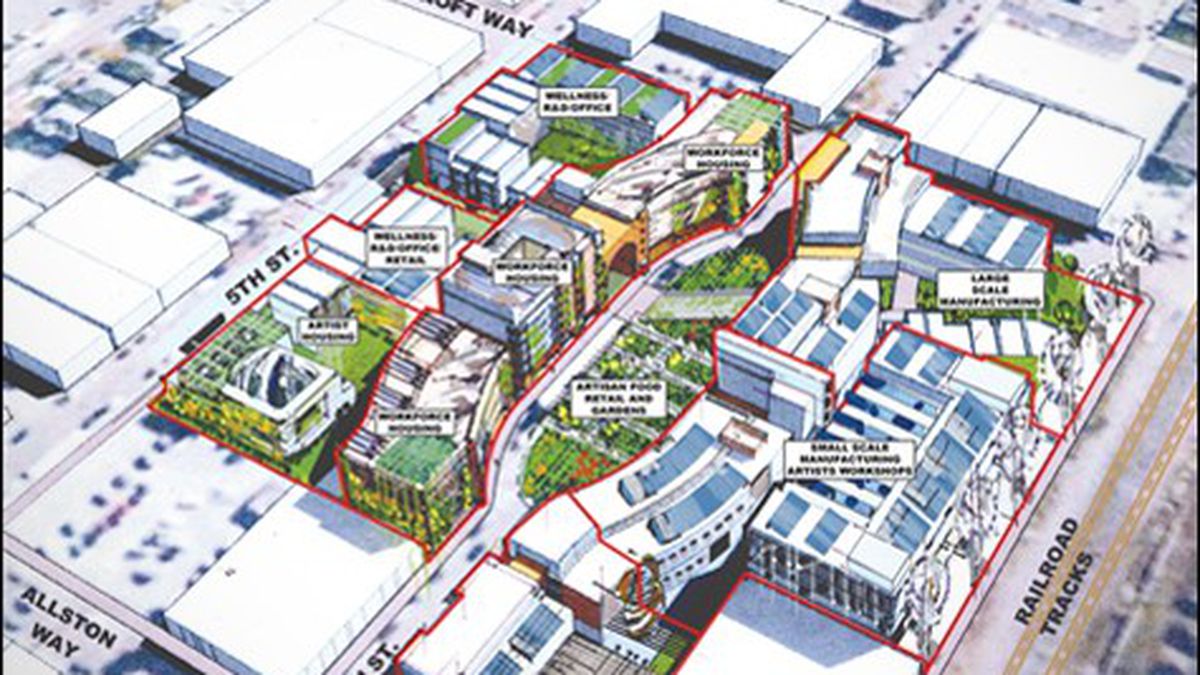 The Battle Over Live-Work Communities in West Berkeley

Proponents contend that they'll allow green-tech workers to live next to their jobs, but opponents say they'll create conflicts.

Last year, the Berkeley City Council took a historic step toward attracting green tech to West Berkeley. Despite the protestations of some local residents and businesses, the council opened portions of West Berkeley to companies involved in research and development — a move that recognized that the economy is shifting toward green-collar jobs. Now, the council is weighing a proposal to create live-work communities on two parcels in West Berkeley so that green-tech workers can live right next to their jobs. The plan would also help the city meet the goals of its landmark Climate Change Action Plan, which aims to get commuters out of their cars.

However, the proposal faces an uphill battle. Some of the same groups that opposed green-tech R&D in West Berkeley are now trying to block the construction of dense housing on two large sites in the area. They contend that apartments and condos are not appropriate for West Berkeley’s traditional industrial and warehouse district. And they’re worried that the proposed developments will drive up property values and rents in the area, and make it more difficult for some business and residents to remain there. They also believe that if the council allows dense housing on the two sites, other developers will want the same for other parts of West Berkeley. “This will spread,” warned opponent Rick Auerbach of West Berkeley Artisans & Industrial Companies.

The city council is scheduled to take up the issue on May 1 and then again on May 8, but a decision last month by the Berkeley Planning Commission has made the controversy more complicated. In a vote that angered both sides of the issue, the commission decided to allow the “intermingling” of housing with green tech on the two sites, but then refused to allow taller buildings for housing — a move that developers and some city councilmembers say will stymie the creation of livable, walkable communities. “I was very disappointed by the vote,’ said Councilwoman Susan Wengraf of the planning commission’s decision. “If we’re going to provide employment opportunities in West Berkeley, then we have to provide places for those people to live.”

At the center of the controversy is Doug Herst, an environmentalist and successful businessman who wants to build a live-work community on a 5.5-acre parcel of land he owns on Fifth Street, between Allston and Bancroft ways. Known as Peerless Greens, named after Herst’s former company Peerless Lighting, the community would feature 320 units of workforce housing, including about 50 affordable units for artists, next to green-tech businesses, light industrial companies, and artist studios. The community also would feature artisan shops, an urban garden, vertical gardens, and rooftop solar panels.

Herst and Darrell de Tienne, a San Francisco consultant who is helping develop Peerless Greens, say they need to be able to construct buildings of up to 75 feet in height to accommodate both jobs and the 320 housing units on the site. The planning commission’s decision, however, limits housing heights to no more than 35 feet. De Tienne says the height limit will result in the loss of up to 250 housing units, thereby torpedoing their effort to create a true live-work community.

Moreover, without the housing, green-tech workers will be forced to live elsewhere and commute to West Berkeley, worsening area traffic and parking problems, and increasing greenhouse-gas emissions — in direct contradiction to Berkeley’s Climate Action Plan. The other site in question, the former Fantasy Records building and nearby property close to San Pablo Avenue that is owned by Wareham Development, presents similar issues.

But Auerbach’s group not only opposes taller buildings for housing, it also is adamantly against the “intermingling” of housing with green-tech and light industrial businesses. Currently, city zoning laws allow Herst to build housing on his site — but only on certain sections of it. Herst says he needs the flexibility to build housing on other portions of his site, too, in order to integrate peoples’ lives with their work. But Auerbach wants to keep the housing restrictions in place, saying that separating housing from businesses leads to fewer conflicts. “We have residents who complain about noise, they complain about smells, they complain about dust,” he said.

Councilwoman Linda Maio concurred with that argument, and noted that West Berkeley residents have long complained about being next to heavy industry, such as Pacific Steel Casting Company. (It should be noted, however, than neither site in question is proposing the kind of heavy industrial uses like Pacific Steel that have created loud conflicts in West Berkeley over the years.)

Jim Novosel, an architect and planning commission member who spearheaded the height limitations on housing, said he realizes that the planning commission’s decision — if upheld by the council — would result in fewer housing units on the two sites. Novosel and Auerbach contend that the housing should be built on San Pablo Avenue, a major transit corridor. Auerbach, Novosel, and Maio also oppose dense housing near Interstate 80 because of air-pollution concerns.

However, the number of available sites for housing on San Pablo appears to be limited. Moreover, current zoning only allows taller buildings right next to the avenue, a rule that further restricts dense housing developments in West Berkeley. “There’s only one-half block on each side of San Pablo” zoned for tall buildings, de Tienne said. “You can’t throw all the housing the city is going to need onto San Pablo.”

At this point, the council appears to be closely divided on the issue of allowing 75-foot-tall buildings for housing on the two sites. However, Mayor Tom Bates indicated in an interview that he thinks the council may overturn the planning commission’s height limitations, and said that he supports doing so. Bates noted that creating livable, walkable communities has long been a city priority as evidenced by the Climate Action Plan. “If it’s done properly,” he said, “it means that people can live right there without having to commute.”

Auerbach said his group hopes to reach some type of compromise. But if the council allows 75-foot-tall buildings and “intermingling” on the two sites, his group may either take the city to court or attempt to referend the council’s decision.

Bates responded that if the council’s decision is referended, then he will push to put the issue on the ballot for a citywide vote — much like the council did with the downtown plan. That move ultimately resulted in a downtown plan that calls for dense housing and tall buildings in the city’s urban core.