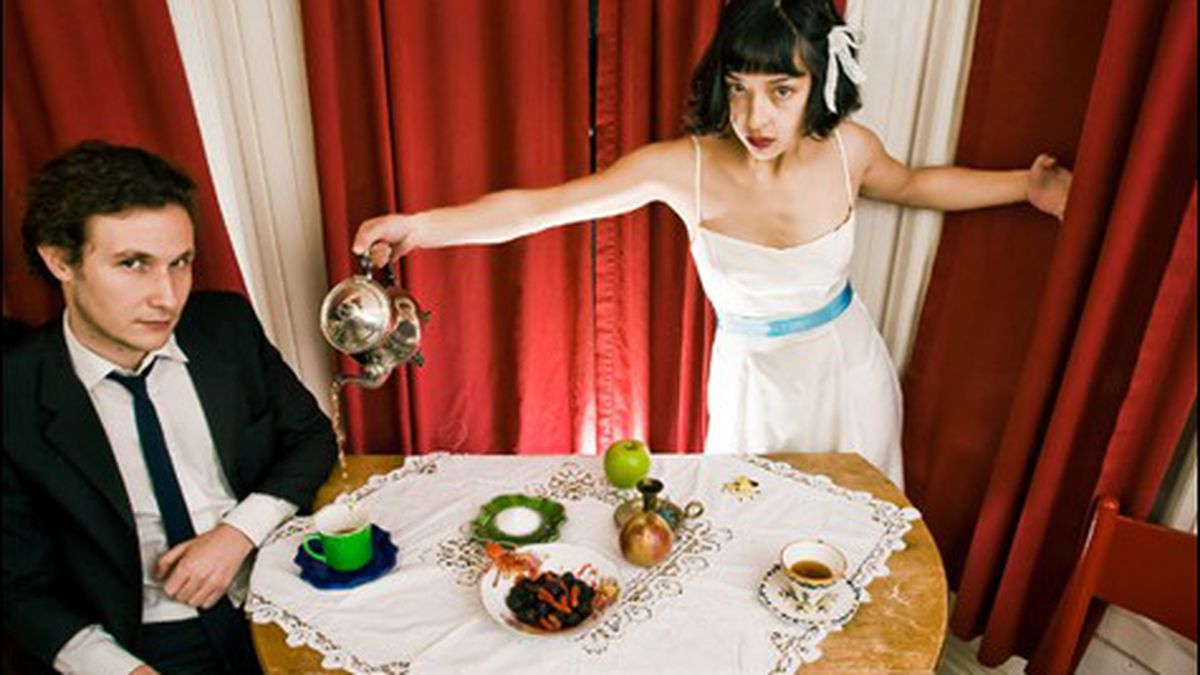 The Baroque Folk of Foxtails Brigade

Laura Weinbach‘s first brush with fame happened at sixth grade graduation, where she performed the song “Hero” by Mariah Carey. It was a phenomenal experience, says the high-voiced brunette, who is now known for guitar-and-string compositions that most closely resemble song cycles of the Victorian era. In fact, she still has video documentation of her first public attempt at R&B. “I just reached into my inner soul — you know, that Mariah Carey lurking within,” Weinbach said, a little snidely. She chewed on the thought for a moment. “It was kind of an American Idol experience.”

Soul wasn’t exactly Weinbach’s calling, even though she apparently had the vocal range for it. She grew up playing classical piano at the behest of her mother — who was a child prodigy — and learning the American Songbook to please her father, who was a record collector and jazz zealot. Weinbach taught herself to play guitar at age seventee, completed a minor in music at UC Santa Cruz, and eventually formed the band Foxtails Brigade, which she co-fronts with Oakland-born violinist Anton Patzner (of Bright Eyes and Judgement Day fame). Since the release of its new album in April, the band has steadily gained renown in the Bay Area. More importantly, Patzner and Weinbach found a way to take what’s arguably a chamber music form and make it palatable for nightclub audiences.

The Bread and the Bait is full of short, lean, lyrical songs that are based on poems. The guitar is light and bubbly, made to sound like a harp. The violin — played not by Patzner, but by Weinbach’s former collaborator, Sivan Sadeh — is warm and vibrato-rich. Weinbach’s voice betrays a few of her influences, like the girlish jazz singer Blossom Dearie, except that it’s inflected with small traces of sarcasm. The language is modern, the imagery is 19th century, and the structure lacks traditional choruses and verses. Instead, Weinbach compels listeners to treat each song as its own self-contained story. In some ways, her music is rather demanding.

That might betray her level of scholarship. Or the fact that Weinbach views music not only as an artistic discipline but as a form of discipline. Her official biography includes anecdotes about how her jazz-lover father — who was also a filmmaker — forced Weinbach to memorize and perform his favorite standards as a way to punish her misdeeds. “He really forced music on us,” Weinbach recalled, remembering how she and her older brother, the comedian Brent Weinbach, both had to study piano as kids. “He actually somewhat tortured us with it. He would bang on these hideous conga drums that he had on weeknights when we had school the next day — and he had no sense of rhythm on the ones and twos.”

Patzner has a similarly rigorous background. He studied piano at the Crowden School in Berkeley, starting in kindergarten. At age eight he switched to violin and played classical music up until high school, when he took up guitar and insisted on being in rock bands exclusively. Those interests coalesced into the “chamber metal” band Judgement Day, which he fronts with his brother Lewis, who plays cello. They started out as street buskers and eventually landed on rock festival bills. Like Weinbach, Patzner also attended UC Santa Cruz, although the two didn’t know each other back then (he’s also a few years older). He dropped out eventually, not wanting to join the UCSC Orchestra, which, he said, was pretty much mandatory for music majors.

It turned out that Patzner and Weinbach were a perfect fit for each other — both smart, quirky, and well-studied but defiant. As a pair they look like Alice and the Mad Hatter. Weinbach is beanpole thin and has the features of a Madame Alexander doll. Patzner is tall and rangy, with a ponytail that vaguely resembles a powdered wig. They met via producer David Reep at the label Third Culture, which put out Foxtails Brigade’s first seven-inch, as well as the original version of The Bread and the Bait, which Weinbach later sublicensed to Antenna Farm Records. When Sadeh left the band to raise a family, Patzner seemed like an apt replacement. They perform both as a duo and as half of a quartet, with Joe Lewis on bass and Josh Pollock on drums. Local violinist Dina Maccabee occasionally subs for Pollock. She appeared with Foxtails at South by Southwest, playing a cookie sheet and a suitcase, which somehow fit the band’s sparse orchestration.

Patzner says he’d characterize Foxtails Brigade as “baroque pop,” a slight alteration from the “baroque folk” label they’ve grudgingly accepted from fans. “I don’t question ‘baroque’ at all,” he said, “but I do question ‘folk,’ which is supposed to be so simple that it can be passed down for generations.” Patzner argues, to the contrary that Foxtails’ material would be a frustratingly complicated thing to learn by rote. One might surmise that the presence of strings and a particularly stringy guitar sound is the only reason that people associate it with folk music. That, and perhaps the high, twangy quality of Weinbach’s voice, or the vaguely Appalachian tint to some of the harmonies.

Weinbach concurs. Aside from having a rather mannered compositional structure, her songs aren’t that easy to grasp thematically. Some are based on fairy tales, with language filched from her favorite canonical authors — Oscar Wilde, Virginia Woolf, Hans Christian Andersen. Others, like the title track, were inspired by her experiences as a substitute teacher. She did it for three years after college, before launching into music full-time. “I would sub for this ninth grade science class at Oakland Military Academy,” Weinbach recalled. “We had to watch these movies about bugs, termites, and ants. “The narration on those bug documentaries, they’re really poetically written. I just took some of that stuff.”

In fact, you can hear the source material directly referenced in Weinbach’s tune “Chat with Sivan”: Clean Communist killer bees thrive on kinder tears/Ants and termites enemies, for ten thousand years. It’s actually about death, she said. The title track is about Weinbach’s first experience of — and subsequent disillusion with — Catholic mass, which happened at “a sweet little [religious] school” in San Francisco.

Such themes are far removed from the cloying pieties of Mariah Carey. But it turns out that Weinbach never quite stanched her inner diva — or, for that matter, her soul. A year and a half ago she went to Walt Disney World with her brother and cousins, and saw that the theme park was holding an American Idol audition. The winner got to perform for a live studio audience, and possibly even advance to a real Idol jury panel. She and Brent decided to try it. They lined up alongside the other pop hopefuls — a gaggle of gay guys with identical wedding bands, and a couple middle-aged women. Brent sang “Part of Your World” from The Little Mermaid, which didn’t go over so well. “He tried to do it sincerely,” Weinbach recalled, “but when he got to the part about being the girl who has everything, it didn’t work — for some reason, he was still offended.”

She sang “Colors of the Wind,” a pseudo-politically correct love song from the Disney movie Pocahontas. It killed. “I got past the audition level and wound up performing it on a huge stage for a thousand people,” Weinbach said, proudly. But she ultimately got beaten out by a fiftysomething country singer.

“They said was a little too ‘Von Trapp child,'” Weinbach recalled, “Not quite the pop icon they were looking for.” For now, her Idol dreams are over. She’s decided to stick with baroque.

Letters for the week of October 17