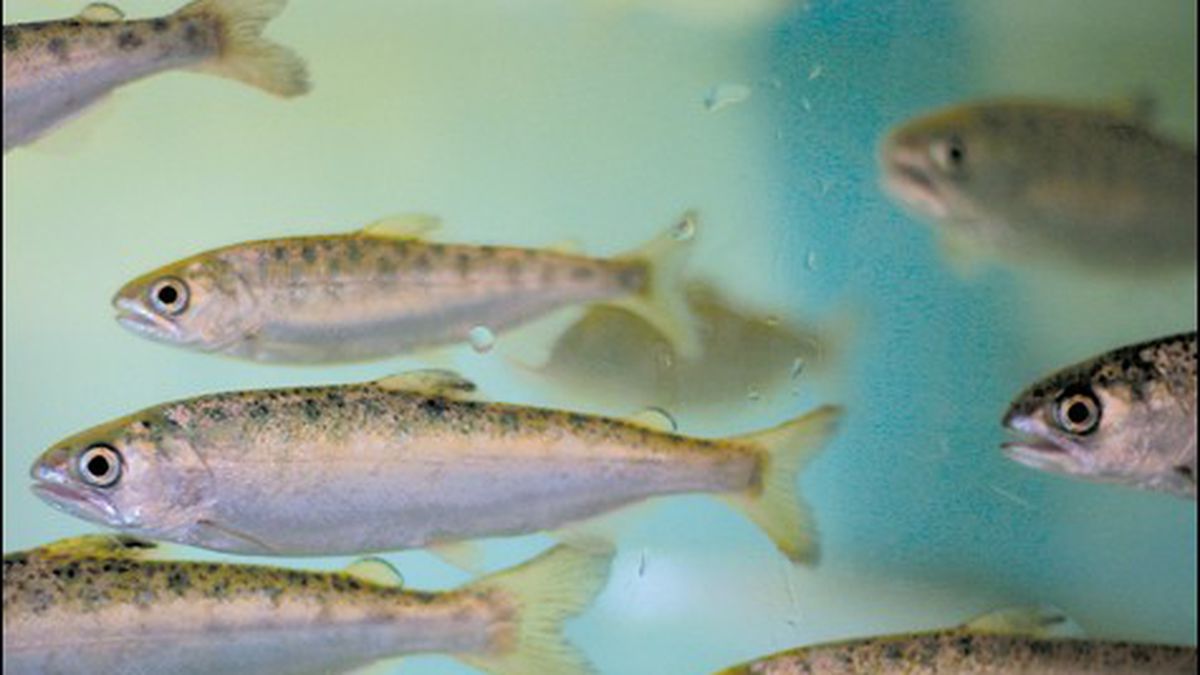 Smolts are being devoured by striped bass and sea birds under a controversial state program designed to re-establish the chinook salmon fishery.

Tanker trucks loaded with thousands of baby chinook salmon arrive each week to the shores of San Pablo Bay. Born in hatcheries upstream, the smolts are released into the murky bay waters in hopes that they will ultimately swim up the Sacramento River to spawn and reinvigorate the state’s once mighty salmon run. But the program sponsored by the California Department of Fish and Game and the Fishery Foundation of California has come under increasing criticism because many of the baby fish are gobbled up by rapacious striped bass and ravenous sea birds as soon as they hit the water.

For years, in fact, appalled fishermen have denounced the effort as one of wasted salmon smolts and the tax dollars used to breed them. Gordon Hough, an East Bay fisherman, said he watched on April 20 as scores of two-foot striped bass and swarming gulls devoured freshly released three-inch chinooks inside the harbor just yards from his vessel. “It seems such a shame to spend all this time and energy raising these fish and then just feed them to the bass and birds,” said Hough, a party boat captain who keeps his vessel Morning Star at the Crockett marina just yards from one of the three salmon smolt release sites. “They let the fish go in the same spot at the same time each day. It took the bass and gulls about one day to figure this out, and the rest of the days, they were waiting.”

This year, the state plans to release millions of smolts into San Pablo Bay. But Fishery Foundation Executive Director Trevor Kennedy, who participates in the releasing of the baby salmon, said the bird and bass predation often looks more devastating than it really is. “The birds are crashing all over the water,” he said, “but they’re mainly lunging at shadows.”

Kennedy, however, acknowledged that smolt losses can mount when the releases take place several days in a row at the same place, which happened at Crockett the week of April 12. That week, Kennedy said, difficult tidal and weather conditions prohibited him and his two assistants from receiving and releasing the fish at the foundation’s two alternate sites — one near Mare Island and one just north of the Antioch bridge. The foundation added the two sites in response to criticism about the loss of smolts at Crockett.

Indeed, the feeding frenzies have become so well-known over the years that some fishermen hover around the smolt release sites to catch the predator fish. Anglers have known for years that smolt release days can mean excellent striped bass fishing. Mike Andrews, skipper of the party boat Predator in Vallejo, regularly zeroes in on the action with boatloads of paying clients. “Last week when they released them it was very good striper fishing,” he said. “You can often limit out in just minutes. The fish get really active at around 11 o’clock when the trucks show up.” He added that when he cleaned and filleted his customers’ fish, most of the stripers’ stomachs contained from one to six salmon smolts.

Nonetheless, Ernie Koepf, a Berkeley-based commercial fisherman, says the state program, which has evolved over the years, works well. In 1993, the Fishery Foundation innovated a way to help the smolts regain their mobility and capacity to evade predators before they enter open water. Prior to their release, the juvenile salmon spend up to two hours in floating acclimation net pens, where they adjust to the saltwater and recover from the truck ride. Kennedy and his crew then slowly tow the pens behind a boat into deeper waters away from the shore before opening them. “There have been more salmon in modern times than in the 1950s and 1960s,” said Koepf, who has accompanied the foundation crew as they handle the baby chinooks, “and it’s because of these acclimation pens and hatchery fish.”

There’s also evidence that smolt releases may be correlated to the number of adult salmon that return three years later to spawn in the Sacramento River. In past years, the foundation has released as many as 21 million smolts, but in 2006, it released zero because of a lack of funding and equipment. Three years later, in 2009, the fewest numbers of chinook salmon ever recorded returned for the all-important fall run to spawn in the Sacramento. In 2004 and 2005, as well, the underfunded program essentially failed, Kennedy said. And three years later — in 2007 and 2008 — salmon spawning returns were poor.

This year’s program began on April 5 and will continue until June. The foundation plans to release 14 million smolts in all.

Tiger Blood Being Sold in Emeryville