.The Art of Solar Cooking

Fuel-less cooking is slowly catching on in the East Bay. 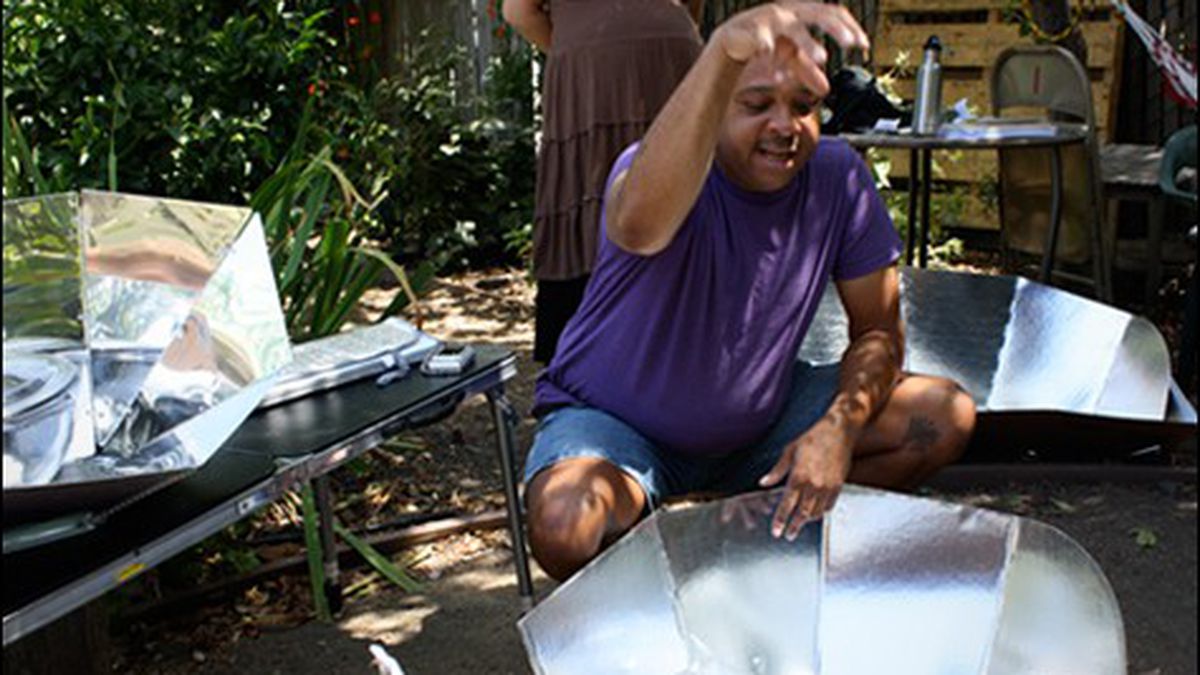 At ten in the morning, the usual fog layer covered North Berkeley. Reyel and Michaela Daystar, self-described solar cooking enthusiasts, were leading one of their occasional workshops in fuel-less cooking. The only problem was that the source of their fuel — the sun — was missing.

Instead, Reyel entertained the dozen or so spectators with stories of cooking a hot dog in a Pringles canister, barbecuing ribs sans grill, and roasting a chicken with only the sun’s concentrated rays (“it’s off the bone“). The three-hour workshop was one of a series in sustainable living hosted by the Ecology Center at the EcoHouse in North Berkeley. Students sat semicircle in a garden taken over by flowers and fruit, waiting for the sun.

It sounds a little Berkeley-esque, this idea of cooking a meal in a dark metal pot surrounded by a series of mirrored solar panels that capture and concentrate UV rays, which can roast a piece of meat in five hours. And it’s a hard sell to summer grillers. The process takes up to half the day, depending on the dish, and only really works between the hours of 11 a.m. and 4 p.m. on the sunniest afternoons. But for those who do decide to ditch that air-polluting barbecue to cook outside in a flameless, smokeless, completely eco-friendly solar oven, the benefits are three-fold, according to Michaela — the air is spared, money is saved on fuel, and a solar-cooked meal is naturally tasty and nutrient-packed.

Solar cooking is catching on slowly in California, but in places like Haiti, Darfur, Kenya, and India, the practice is widely used. Worldwide, an estimated 1.5 to 2 million people cook primarily with solar ovens. Humanitarian organizations like Sacramento-based Solar Cookers International distribute cheap and efficient solar ovens to war-torn, devastated, and impoverished regions. Most recently, the group distributed 400 kits to families in Pigeon, Haiti, complete with operational training for 135 people.

The method especially appeals to those living in refugee camps and disaster zones, according to Kevin Porter, director of educational resources at Solar Cookers International. “There’s a risk to people venturing outside their camps,” he said. “Women and children leaving the camp to gather firewood are [exposed] to potential rape or beatings. There’s also the benefit of not going through the drudgery of gathering firewood. It’s a lot of work — people spend hours a day gathering wood. Children can spend more time in school instead.”

Locally, solar cooking has spread among hobbyists for different reasons. Solar Cookers International, the main place for hobbyists to buy gear, says sales have increased nearly five-fold since 2000. El Cerrito residents Reyel and Michaela Daystar use their solar oven almost every sunny day. Reyel says the slow-cooking method actually saves time. Since there’s no flame, there’s no fire hazard, and almost everything can be prepared by “absentee cooking” — that is, throwing the food in the pot, sticking the pot in the sun, and coming back in a few hours. Reyel also extols the benefits of his “thirty-day solar diet.” By cooking only with the sun, Reyel says he dropped a few pounds and saved at least $8 on his PG&E bill.

“I was so stoked,” he said. “It was only $8, but it was $8 that I controlled …. It made me feel empowered about the energy and fossil fuels I’m using.”

Elizabeth Peele is the coordinator of the Northside Community Garden in Berkeley. She has organized educational public workshops in solar cooking and spearheads an online listserv dedicated to adventures in solar cooking. With about forty subscribers, she says the interest is definitely there. She’s even planning a solar cookout/potluck in September, which will be open to the public. She says solar cookouts are a way for locals to share success stories, setbacks, and recipes for everything from cheeseburger pie to broccoli casserole, peach pudding cake, and more.

“One woman came to a [recent workshop] in case of an earthquake. She wanted a solar cooker in her survival kit,” Peele said. “Then she started making roasted chickens and collard greens.”

Peele built a solar cooker (which she says is more like a “solar warmer” since it only gets up to about 125 degrees) out of cardboard and aluminum foil. It’s a low-tech version of a more efficient, store-bought model: a series of panels encircle the cooking platform like petals of a flower. The sun beats down on the foiled panels and the sunlight is directed toward the center, where a black pot wrapped in a plastic cooking bag captures and absorbs the heat. Some store-bought models can get up to 500 degrees, though Michaela says in the Bay Area climate, a steady 350 is easier to achieve.

Humans have been concentrating the sun’s rays for thousands of years. According to legend, the Greek scientist Archimedes reflected the sun’s rays to set Roman ships ablaze during the siege of Syracuse in 213 BC. Centuries later, the Anasazi Native Americans in the Southwest erected buildings designed to capture sunlight and passively heat the home. More recently, a large solar steam cooking system was installed in a temple in Maharashtra, India. According to Solar Cookers International, the cooker is able to produce between 40,000 to 50,000 meals per day, saving an estimated $45,000 in fuel per year.

For Chris Jeong, solar cooking is just another way to be a better steward of the earth. The San Francisco acupuncturist built a solar dehydrator that he uses to dry mushrooms and tomatoes for cooking. He hopes to eventually build an entire solar kitchen, though he admits that might be tough to do in the fog bank.

“I’m a mad scientist, I like to experiment,” Jeong said. But will the solar cooking trend grow beyond the Bay Area? Jeong isn’t so sure. “Unfortunately, we do things only when we have to. So if it gets to a point where typical fuel sources get too expensive, maybe we’ll look at it more seriously. When the water runs out, maybe we’ll look at catching rain water.”

Back at the workshop, the sun made an appearance just before noon, and within a mere thirty minutes, the solar oven was up to 325 degrees. Michaela prepared a simple spiced broccoli/potato/tomato stir-fry, and after it sizzled in the solar oven for an hour or so, Reyel withdrew the pot to the oohhhs and aahhs of the crowd. The sun bounced between the panels and seared the eyes of students.

“Here’s the magic,” Reyel said as he removed the plastic oven bag that had melted over the pot. Lifting the lid, the steamy smell of roasted vegetables and spices filled the air. Someone whistled through their teeth, “Now we’re cooking.”