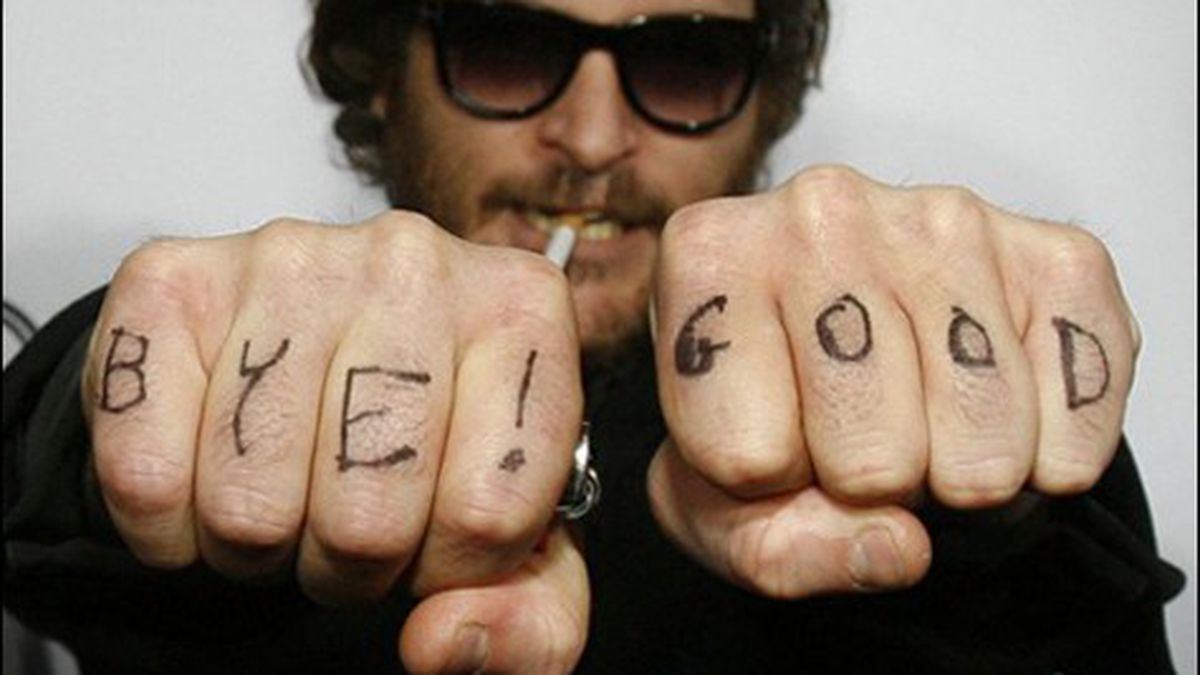 The Agony and Ecstasy of Joaquin Phoenix

If Phoenix is really and truly a washed-up drunk with delusions of grandeur, I'm Still Here is a worthy swan song. Way to go.

It smells strongly of hoax. As we wend our way through the documentary-style account of acclaimed actor Phoenix (Walk the Line, Hotel Rwanda, Gladiator) quitting movies and attempting to launch a career as a hip-hop performer, Phoenix, director Affleck, and most of the main “characters” drop numerous clues that the whole enterprise is being staged for our entertainment.

On camera, Phoenix retires from acting and goes cuckoo in an orgy of self-indulgence. The film crew always happens to be around for new plot turns, as Phoenix blows off Ben Stiller (Stiller wants him to be in Greenberg), takes a meeting with Sean “Diddy” Combs about a recording project (the kingpin rapper struggles to hide his smirking contempt), and generally plays the fool. He’s a mess: fat, slovenly, out of shape, in a drug-induced stupor, with a déclasse full beard and serious bed hair. David Letterman has the mumbling, discombobulated Phoenix on Late Show and makes fun of him in a way that surpasses anything any publicist, anywhere, under any circumstances, would allow to go out on network TV — and of course the interview goes ballistic on YouTube.

Phoenix is shown constantly jetting back and forth across the country trying to catch some sort of publicity but always failing. One particularly pathetic episode in a long string of them witnesses him angling to get invited to one of Barack Obama‘s inauguration parties in Washington, DC. No one will let him in — he and his retinue get stuck in a hotel room with nowhere else to go.

We keep following Phoenix as his trip down the showbiz toilet gathers momentum. Diddy dismisses him in no uncertain terms. No-talent Phoenix’s hip-hop stage show bombs in Vegas. Actor Edward James Olmos drops by for a chat and leaves dejected by Phoenix’s incoherent rant. Phoenix takes a beating in the gossip press. He bombs big-time in a Miami nightclub, and every single person in the audience posts on the Internet his dive into the audience to fight a heckler. Meanwhile, Phoenix is carrying on a running battle with his personal assistant, Anton (played by actor Antony Langdon), that culminates in Anton defecating on his boss’ face while he sleeps.

Phoenix’s life and career grow uglier and more childish and increasingly desperate, so he does what any self-respecting burnt-out, hopeless movie-star-on-the-wane would do. He takes a plane to Panama, says a few words to his missionary father (played by the director’s real-life dad, Tim Affleck), and, with the camera in tow, wades into a swamp until his head disappears under the murky water. The end.

A few of the “tells” — Phoenix refers to his upcoming music project as “a hip-hop ‘Bohemian Rhapsody'” (a very Christopher Guest line). He moans that his film Reservation Road didn’t do as well as Revolutionary Road, another serious character study. Neither he nor Letterman can quite keep a straight face during their supposedly tense interview. The hooker sequence — which by the way sets new standards for full frontal male nudity in the usually prudish American movie industry — looks staged, as does the Miami club debacle and all of Phoenix’s rumbles with Anton. And even though almost all the main characters are in on the gag, Phoenix and Affleck still needed to hire actors to portray Anton, Phoenix’s father, etc.

Some of the scenes are so excruciating to watch we’re reminded of Andy Kaufman, the groundbreaking comic pioneer who perfected fake docs and the deadpan comedy of embarrassment thirty years before Phoenix and Affleck pulled their stunt. Sacha Baron Cohen, This Is Spinal Tap, and even the films of Gus Van Sant find echoes in Phoenix’s “torments.” Can this be for real? And how much do we care one way or another?

Or we could look at it another way: It’s all absolutely true. Joaquin Phoenix was so disappointed that his thoughtful, meaty films (Two Lovers, Reservation Road) failed at the box office that he came unglued, let himself go, and became such a figure of fun that Stiller could show up at the Oscars telecast in full beard and rumpled clothes as a parody of Phoenix — prompting Natalie Portman‘s “Hasidic meth lab” gibe. And Phoenix granted his pal Affleck full access to his unraveling.

All this would be a first, of course. The putative miseries of a Britney Spears or a Robert Downey Jr. were splashed across the collective consciousness in a carefully controlled way, but no one has ever actually watched a movie star implode at close range. It would be a revival of the pillory for the electronic age, a public humiliation with cathartic, ultimately healing overtones. Phoenix would suffer for our sake, a kind of religious sacrifice, to teach us — the audience who gets left holding the bag at the end of the movie — a moral lesson about being satisfied with what you’ve got.

So you’re unemployed, or stuck in a rotten job, with a cheating girlfriend/boyfriend and a pile of bills? Cheer up. Things could be worse. You could be poor Joaquin Phoenix, who wanted to be known as a serious actor but instead was forced to dress up as a fruity Roman emperor opposite Russell Crowe. And every would-be rapper who ever sweated at a spoken-word open mic can only be encouraged by Phoenix’s god-awful rhymes.

There’s a third way, as well. With the help of Affleck — Phoenix’s real-life brother-in-law and an actor unafraid to take chances — plus such walk-ons as Jack Nicholson and Phoenix’s actual publicist, Sue Patricola, Phoenix is having sharp, pointed fun with the notion of hype itself. So what if I’m Still Here doesn’t have the bald-faced jokes of This Is Spinal Tap or Kaufman’s insidious pathos? Using himself as the goat, he demonstrates, with maximum cringe factor, how it feels when the limelight starts to dim. He’ll probably never be able to top this performance, so if it’s all true and Phoenix is really and truly a washed-up drunk with delusions of grandeur, this should rightly be his swan song. Way to go.