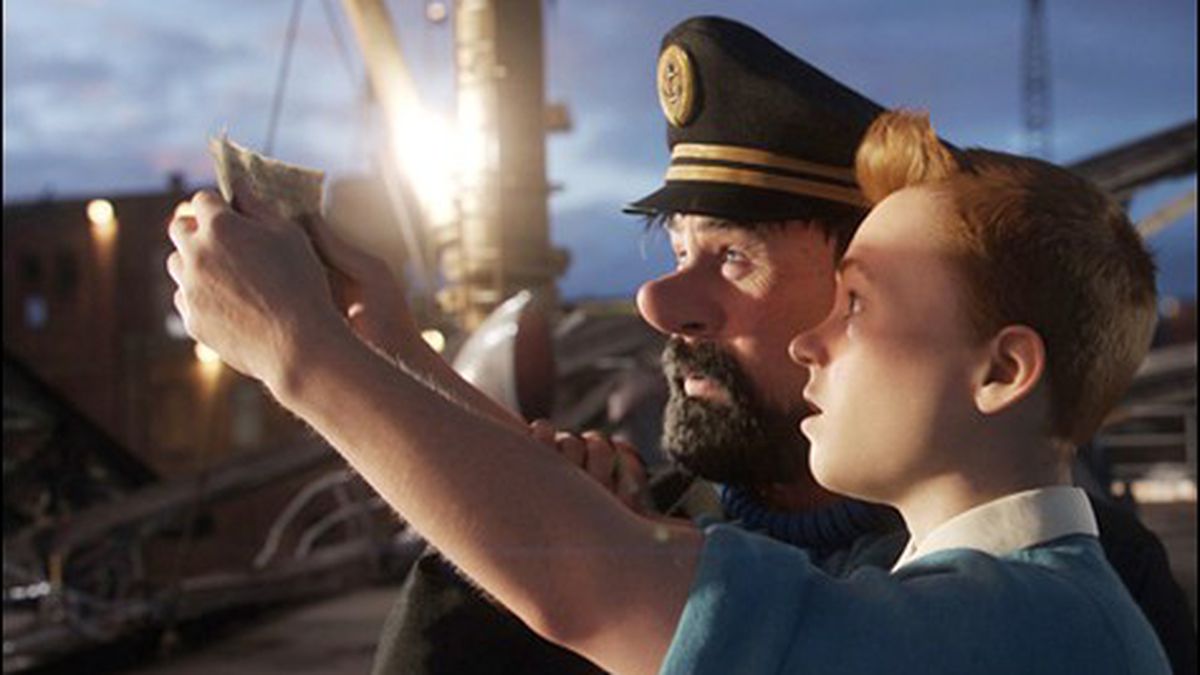 The Adventures of Tintin

Spielberg and Tintin, the ideal couple.

Ten thousand thundering typhoons! Billions of blue blistering barnacles! Tintin fans, relax. Steven Spielberg has not only done no harm to Hergé’s beloved juvenile detective, he’s created the animated showcase that The Adventures of Tintin deserves — generous, good-natured, optimistically inquisitive, and full of wonder at the wide world out there.

In the first of his two personally helmed releases for the 2011 holiday season — alongside the live-action animal fable War Horse — producer-director Spielberg has assembled a tidy team. Peter Jackson, lord of Lord of the Rings, serves as a producer. The screenplay adaptation, in which Hergé’s Red Rackham’s Treasure is melded with one or two of the lad’s Mideast capers, is by Steven Moffat (Dr. Who), Edgar Wright of Shaun of the Dead, and Joe Cornish (Attack the Block) — a trio of Brits, which fits in with Spielberg’s Anglo focus these days.

Helping lead the film’s superb motion-capture animation (in better-than-average 3D) are design and effects supervisor Richard Taylor, senior visual effects supervisor Joe Letteri, and supervising art director Andrew L. Jones, at the head of an army of technicians. What they came up with does justice to the antiquey-perennial tone of the Tintin stories, in this case revolving around the young reporter’s curiosity about a model ship he finds at a street market. Everyone seems to want to steal it, and the chase proceeds from Europe to the North African port of Bagghar and back again, on the high seas and in the air.

Tintin himself is an odd-looking spud of indeterminate age, the sort of kid you wouldn’t necessarily want to leave in charge of your toddlers, but could maybe be trusted with your teenage niece. His trademark cowlick hair formation is more obtrusive on screen than on the printed page, but his intonation, by actor Jamie Bell, is reassuringly unremarkable. The voice talents open up a bit with Tintin’s eternal sidekick, Captain Haddock. If we stopped to analyze the blustering old salt we might come to the conclusion that he’s a delusionary alcoholic suffering from memory lapses, but when the chips are down and Tintin gets in a jam in a sputtering glider or aboard a runaway train, the captain — winningly voiced by Andy Serkis — is a handy man to have around. Meanwhile Sakharine/Rackham, the villain of the piece (voiced by Daniel Craig), resembles Max von Sydow. Bumbling secret agents Thomson and Thompson are well voiced by the Shaun team of Nick Frost and Simon Pegg, and French comic Gad Elmaleh plays Sheikh Salaad.

Spielberg and crime-fighting juvenile comic-book character Tintin are made for each other. In the inventive title sequence; Serkis’ ravings as the eccentric/lovable windbag Haddock; Tintin’s spectacular Spielbergian aerial exploits in Bagghar; and the wonderful “dueling cranes” sequence, this smashing tribute to the eternally adolescent Belgian detective and his faithful dog Snowy not only captures the essence of Tintin’s appeal but also the essence of what we recognize as the Spielberg artistic mandate.

Tintin is a fair-minded, resourceful, transparently harmless, gadget-crazy pre-adult — without a single sexual thought, or any relatives, or much of a job outside of playing his hunches — who dedicates his time to solving mysteries and setting things right all over the globe. That, in a nutshell, is the Spielberg of popular imagination. If he’s smart, the director will never, ever attempt a sequel to this yarn about the search for sunken treasure. Leave it alone. It’s as close to perfection as Spielberg will ever again achieve.