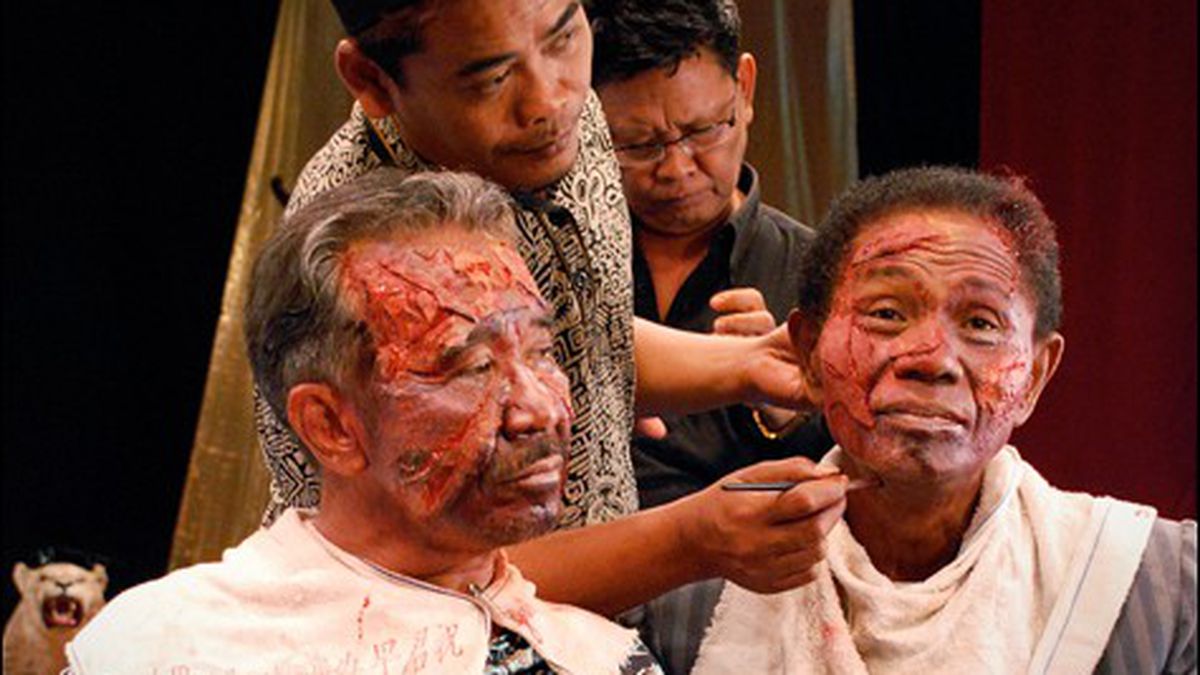 The Act of Killing

The Act of Killing is one of the most compelling documentaries of the past few seasons, but it also holds the distinction of being a repellant experience, an almost physically nauseating portrait of a group of exceptionally loathsome people — the rightwing paramilitary thugs who murdered upward of a million “political enemies” in Indonesia in the years since 1965 with the full approval of the government, and who remain blissfully at large in that country today.

The film is so provocative it’s easy to see how it attracted such big-name documentarians as Werner Herzog and Errol Morris (who both serve as executive producers), but the subject matter also ostensibly caused half the crew of the Danish/Norwegian/UK production to declare themselves Anonymous, including one of the movie’s three co-directors.

Anonymous, an Indonesian, and his/her American directorial partners, Joshua Oppenheimer and Christine Cynn, embark on a risky strategy to expose the criminals and their crimes. The production evidently ingratiated itself to a few of the killers, including Anwar Congo, a self-proclaimed gangster; his bully-boy comrade Herman Koto; Yapto Soerjosoemarno, leader of the Pancasila Youth, a troop of uniformed anti-communists; and newspaper publisher Ibrahim Sinik, whose mission is to make the public hate undesirables. “Communists,” then as now, were ready-made scapegoats in the days when these men got their license to kill — union workers, students, intellectuals, landless farmers, and even ethnic Chinese, whom by the logic of the day were suspected of sympathizing with Mao Zedong, 2,800 miles away in China. The gangsters decided who the enemies were, then summarily executed them with complete impunity.

Years later the film crew suggested that these aging tough guys, who already enjoyed swaggering down the streets of the poorest Java and Sumatra neighborhoods like conquering heroes, proudly cataloguing their atrocities, should take the “glory” one step further by re-enacting their crimes on elaborately staged sets, with realistic blood-and-gore makeup and casts of bewildered ordinary citizens, for the international cameras. To appeal to their sense of importance. Says Congo: “We have to show this is history, so people will remember.” Thus, war stories of garrotings, rape, and torture get turned into a Rambo-style jungle action flick or, in one astounding scene, a full-scale outdoor musical production number featuring a female chorus line and an enormous model of a fish.

Congo is troubled by guilty nightmares of watching people die, but that doesn’t stop him from forcing his young grandsons to watch a movie of him, in the role of a “communist,” being tortured — to their obvious discomfort. Worse still is the real-life scene in which one paramilitary goon shakes down a nervously smiling Chinese shop owner for protection money. Suddenly the connection between foreign policy and racketeering becomes clear. Later, at an eerie casting call for the re-enactment of a massacre, nobody wants to play a victim, but the kids watching all this play-acting from the sidelines are clearly delighted.

The Absurd-Banal-Hideous-O-Meter hits eleven and breaks. Sick of watching this, we want to stop the movie and let the grotesque outrageousness of it drain out a little, but it keeps rolling. What is there to compare with these clownish monsters?

Unfortunately, history is filled with Anwar Congos. No country has a monopoly on ferocious hatred: Nazi Germany, Idi Amin’s Uganda, Soviet purges and gulags, Khmer Rouge, Taliban, Serbian death squads, Abu Ghraib, Wounded Knee, Spanish Inquisition, etc., the list goes on and on. It’s easy to cluck at the simple-minded, bloodthirsty boobs in The Act of Killing. But why single them out? Is it just another form of racism, to look down on Indonesians for being intimated by hoods? What about the American officials who commissioned Indonesia to “stop commies” in the first place? You’ll never get a CIA op to laugh on camera about the people he’s snuffed. But these oafs don’t seem to care, so they’re fair game.

None of Herzog’s or Morris’ detached/ironic approach for Oppenheimer and his mates. They get down and wallow in it with their subjects. Is the psychodrama therapeutic or somewhere beyond crass? By the time The Act of Killing collapses with a magna-kitsch rendition of “Born Free,” we’re past caring. It’s not clear what the filmmakers intended, but that’s what they end up with.