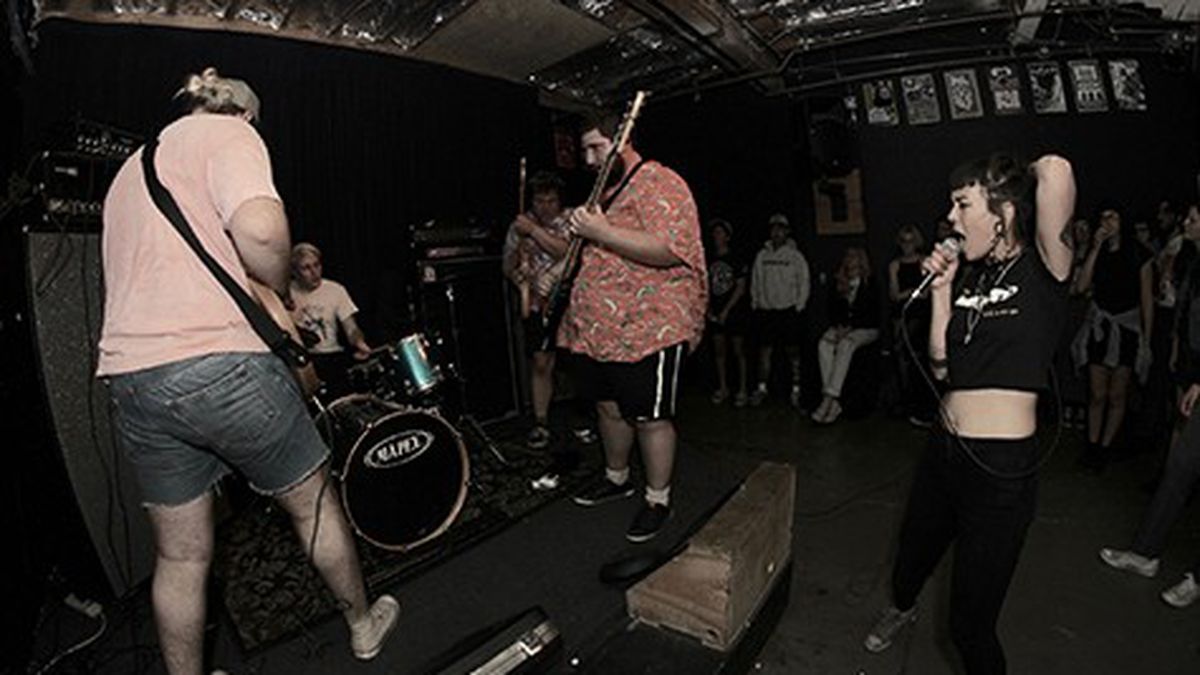 Techie Blood: The Sound of the Capitalist Apocalypse

The East Bay hardcore band doesn't claim to have a political agenda, but its music is a natural reflection of the Bay Area's socioeconomic turbulence.

When East Bay hardcore band Techie Blood’s demo tape appeared on a YouTube channel called Guy Fieri Official (which isn’t affiliated with the famous, bleach-blond chef, by the way), I hailed it as the urgent, political record the East Bay’s rock scene was missing in my year-end roundup of last year’s best releases (see “Top Fifteen Local Release of 2015,” Year in Review, 12/23/2015).

The abrasive, ten-minute project is rife with break-neck guitar riffs, a pounding rhythm section, and relentless, screeching feedback and psychedelic electronic elements that conjure images of an austere, violent dystopia. And the cover of the tape is emblazoned with the text “Millions of Dead Techies.” You can’t really come up with an anti-gentrification slogan more extreme than that.

As Express contributor Sam Lefebvre wrote in a 2014 piece for SF Weekly titled “Garage Is Over: The Cutting Edge of S.F. Rock Is Now Hard and Angry,” since the mid-Aughts, the Bay Area’s rock scene has been awash with paisley-printed nostalgia for the garage rock of the Sixties — a subgenre he deemed tired and un-subversive. He predicted that a new wave of faster, angstier rock was on the rise, fueled by rage against rising income inequality and displacement.

Two years later, however, his predictions haven’t quite manifested. Burger Boogaloo — a garage-centric summer festival in Mosswood Park — has only gotten more popular, and East Bay punk bands with the most mass appeal, such as Shannon and the Clams, fall cleanly into the nostalgic, feel-good garage camp. That’s not to say that garage-pop is vapid or monolithic. Younger Lovers and Meat Market for instance are two of the most beloved, local bands working in the genre. Both have elements to their work that speak to the experiences of gay men of color, specifically. These perspectives are refreshing and necessary in an underground rock scene where straight, white twenty-somethings are overrepresented, and most of the music being made is not politically charged.

I had been following Techie Blood’s work since the release of its strong debut in August 2015, and since, the band has uploaded two more bodies of work — second tape and grids — to Guy Fieri Official. So imagine my surprise when, after exchanging emails with guitarist and bandleader Trevor McBride for several months, the first thing he said when we stepped aside for an interview during the band’s show at Honey Hive Gallery was that he did not intend for Techie Blood to be a political band.

“I mean, obviously, gentrification is shitty and stuff, but we’re not trying to make a political message,” he said, standing on a windy sidewalk in San Francisco’s Outer Sunset district. “No, ‘Techie Blood’ is just, like, a dumb band name.”

Somewhat taken aback, I countered that, amid the Bay Area’s tech boom and onslaught of gentrification, you can’t divorce the name “Techie Blood” from its real-life context. And what about the phrase “Millions of Dead Techies” prominently featured on their tape’s cover?

“The label Neighborhood Watch released [our demo tape] and then, I don’t know, the lady who did it asked me what I wanted on the back,” McBride explained. “And I didn’t have song names — I don’t do song names for the band. So I said, ‘Just write ‘Millions of Dead Techies” because of the band Millions of Dead Cops.”

I wasn’t really buying it, though. With their jokey answers and weird antics, the band seemed to be trolling me to some extent. Plus, Millions of Dead Cops isn’t apolitical, either. As McBride and I spoke, bassist Noah Malowitz and drummer Sam Kless, both dressed in kitschy Hawaiian shirts, beat boxed and danced on the street. An ice cream truck rolled by, and the band members cheered. It was hard to keep the conversation from getting off track.

While the members of Techie Blood were quick to blow off the political implications of their work, I thought back to the description for the demo tape on Guy Fieri Official: “techie blood’s demo opens with the sounds of world war 6- lazers blasting, explosive metal dins, the non stop chaos of a for profit war, and the evil laughter of mecha-skeletons driving through the wasteland of the san francisco bay area. ‘no! no! no! no!'”

At first, McBride seemed more inclined to discuss what he considers the staleness of the West Coast hardcore scene. But when I brought up the text on the YouTube page, he seemed to let his guard down. He referenced sci-fi classics such as William Gibson’s seminal cyberpunk novel Neuromancer and the film Bladerunner, which both envision futuristic, dystopian versions of our technology-obsessed consumer society.

“The thing I like about it is that cyberpunk is like a capitalist apocalypse,” he said. “You could definitely put gentrification in there as a part of that.”

While McBride did the vocals on the demo tape, he later recruited Erika Calderon to join the band. Calderon handles the majority of the band’s lyricism now, and it’s her shrill, distorted vocals that puncture the dense instrumentation on second tape. Calderon had been relatively quiet throughout the interview until it was almost time for the band to play. As McBride, Malowitz, and Kless set up their gear, she and I chatted in the green room.

“The last song I wrote is more towards being mad at techies and stuff,” she said. “It’s really weird to see my neighbors change from Black families to white people that are just trying to buy a house.” Calderon, who is Mexican-American, said she lives in Deep East Oakland, where an increasing number of new homebuyers are ousting longtime renters. Kless, who is white and lives in Dublin, complained that it’s hard to draw people out to the shows he books in the nearby San Ramon Valley because Oakland is considered more hip — a trend that has helped fuel displacement. While Techie Blood doesn’t claim to have an explicit political agenda, the band’s work is an earnest reflection of these tumultuous demographic shifts and accompanying political upheaval.

Calderon continued, “We aren’t a political band, really, but it’s important to be able to recognize those kinds of things, and those are some frustrations that I have: Being brown, and feeling suffocated by these people. You know?”

It was time for Techie Blood to take the stage. As McBride, Kless, and Malowitz pounded on their instruments, Calderon paced back and forth with a visible hostility as she screamed into the mic. An audience member pushed his way through the hypnotized crowd and began violently kicking and punching the air, inciting a mosh pit within the small gallery space.

Calderon narrowed her eyes as she sang. A venomous expression had replaced her friendly demeanor from our earlier conversation. As I dodged other audience members’ kicks to the head, I could feel her fury.