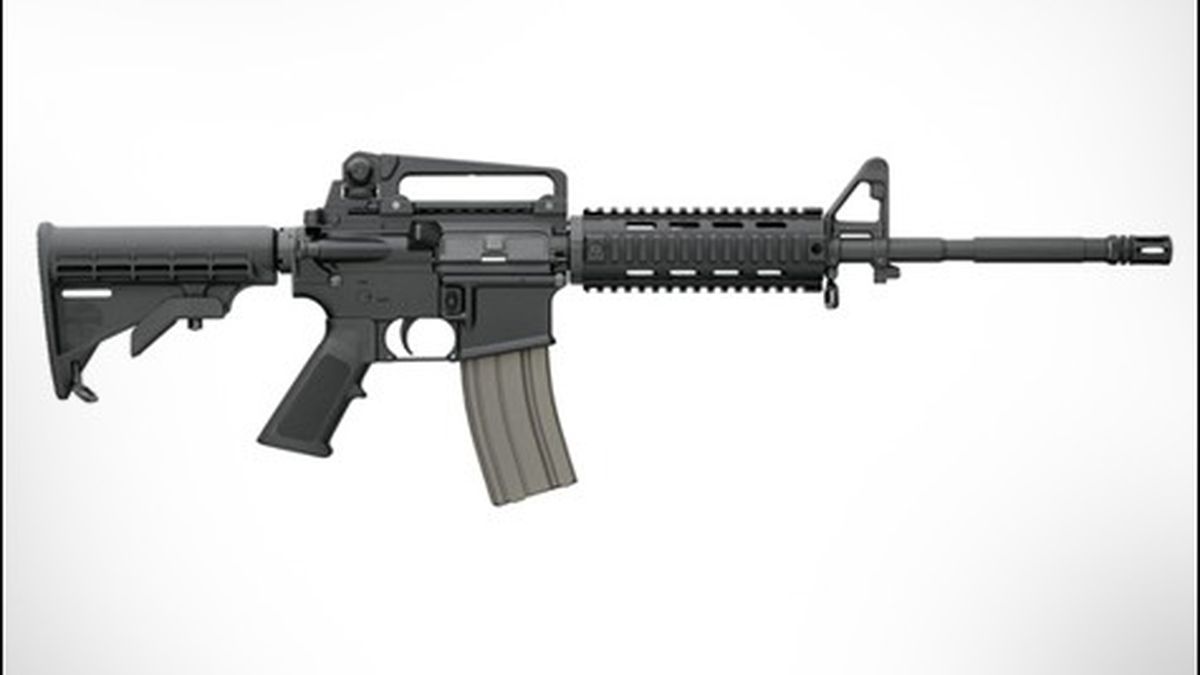 The state teachers' retirement system is attempting to divest itself from a company that finances the manufacture of assault weapons like the one used at Sandy Hook Elementary School. But even if it does, it still won't be out of the gun business.

After Adam Lanza slaughtered twenty first graders and six adults last month in Newtown, Connecticut, teachers’ unions across the nation emerged as some of the most vocal advocates for stricter gun control laws. But not long after the mass shooting, it also was revealed that the California teachers’ retirement system likely helped finance the production of the assault weapon that Lanza used at Sandy Hook Elementary School. The California State Teachers Retirement System (CalSTRS) is a major investor in Cerberus Capital Management, a private equity firm that controls Freedom Group, the manufacturer of the Bushmaster XM15 assault rifle — the weapon that made Lanza’s rampage at Sandy Hook so swift and deadly.

CalSTRS is now demanding that Cerberus sell Freedom Group, but even if it’s successful, the pension fund likely will still be in the gun business. In fact, extracting itself completely promises to be a Herculean task.

Cerberus is the world’s fourteenth-largest private equity firm; it manages $25 billion in investments. In Greek mythology, Cerberus is the three-headed wolfhound that guards the gateway to the underworld of Hades. Hercules’ final and most dangerous task is to capture the Cerberus alive. And befitting its mythological namesake, Cerberus Capital Management invests in companies intimately involved in war and death.

Freedom Group’s “family of companies,” as the gun maker calls its holdings, was assembled by Cerberus in the late 2000s as a result of fifteen strategic mergers and acquisitions. In just a few years, Cerberus became one of the largest gun profiteers in the world. In addition to Bushmaster, Freedom Group brands include well-known gun makers like Remington and Marlin, along with several ammunition producers. Freedom Group also owns TAPCO, a “tactical weapons gear” company that sells thirty-round, high-capacity magazines for assault rifles like the Bushmaster XM15. Freedom Group sells its weapons in the massive US civilian market through licensed dealers, but its guns trade by the millions on the less-regulated secondary markets of gun shows, personal sales, and black markets.

CalSTRS is one of Cerberus’s biggest limited partners. As such, the ultimate owners of the arms manufacturing company that made the rifle used in Sandy Hook are California’s K-12 and community college teachers.

But divestment isn’t an easy process. It’ll take time for Cerberus to sell Freedom Group, and that gun company is hardly the only weapons maker in Cerberus’ portfolio — or in CalSTRS’ for that matter. Weapons manufacturing is big business. Numerous pension funds, mutual funds, and foundations, many of which claim to follow socially and environmentally responsible guidelines when investing money, hold big stakes in companies that make and sell everything from pistols to missiles.

CalSTRS’ partnership with Wall Street’s hound of hell began in 2003 when the pension’s board voted to invest $100 million in Cerberus Capital Management Institutional III, LP. This private equity fund was then used to buy out Freedom Group and other gun- and ammo-makers over the next several years. In 2007 and 2008, CalSTRS placed another $650 million with Cerberus as it continued to gobble up gun companies, among other investments.

Today, CalSTRS claims these were more or less innocent investments that just happened to get funneled into the small arms industry. But Cerberus didn’t just “happen” to buy up gun companies because they were profitable. This wasn’t a case of Wall Street money managers buying out a business they had no real knowledge of or interest in besides profits. Rather, weapons have been a core business area for Cerberus since its founding.

Cerberus, based in New York, was established in 1992 by a clique of wealthy and politically connected investors, most notably former US Vice President Dan Quayle, future US Treasury Secretary John Snow, and the firm’s co-founder, Stephen Feinberg. They dove into weapons manufacturing about ten years ago with a focus on firearms and set about methodically assembling Freedom Group. Cerberus hired NRA-affiliated gun lobbyist George K. Kollitides II in 2003 to lead its “defense and firearms” portfolio, according to a 2011 Freedom Group press release.

“Kollitides was the principal architect of the investments in [Freedom Group] for Cerberus,” the company explained. In addition to building up Cerberus’s weapons companies, “[Kollitides] led a successful campaign to combat anti-gun legislation in New York,” bragged Cerberus’ press brief.

Perhaps the CalSTRS board wasn’t paying attention to what Cerberus was doing with some of the teachers’ $750 million in cash. To be fair, CalSTRS has $38 billion in teacher retirement savings parked with about 260 different private equity funds. After Sandy Hook, the realization of what Cerberus had done with CalSTRS’ money led State Treasurer Bill Lockyer and the pension board to issue a call for Cerberus to fully divest from Freedom Group, especially because the Bushmaster XM15 rifle is illegal in California.

CalSTRS spokesman Ricardo Duran said the pension’s effort to divest from makers of illegal weapons doesn’t stop with Cerberus. “We are reviewing our entire portfolio and we’ve identified two other companies in the public equity sphere in which we own stake,” said Duran.

Prompted by CalSTRS, Cerberus has agreed to sell Freedom Group, fearing a loss of access to the pension fund’s money more than the loss of the gun-maker’s profits. In a press release following Sandy Hook, Cerberus attempted to downplay its holdings in weapons makers, and its extensive political meddling in gun control and weapons laws.

“As a Firm, we are investors, not statesmen or policy makers” the company’s statement read. “Our role is to make investments on behalf of our clients who are comprised of the pension plans of firemen, teachers, policemen and other municipal workers and unions, endowments, and other institutions and individuals. It is not our role to take positions, or attempt to shape or influence the gun control policy debate. That is the job of our federal and state legislators.”

However, Cerberus does, in fact, attempt to shape and influence federal and state legislators. Since 2003, Cerberus has spent more than $16 million lobbying the US Congress. Much of this influence-peddling was focused on matters related to the taxpayer bailout of Chrysler and its financial subsidiaries that Cerberus once owned, but a significant share of lobbying firepower was directed at gun laws and regulations. According to Senate lobbying disclosure records, Cerberus hired several Washington, DC firms to influence House and Senate members on topics related to “small arms sales to the Department of Defense and foreign military sales of small arms under Department of Defense contracts,” and “small arms industrial base reform.” The former issue pertains to Freedom Group’s lucrative weapons sales to foreign nations such as Colombia, the Republic of Georgia, and Oman, in addition to gun sales to the US military. The latter lobbying issue refers to federal subsidies intended to support US gun manufacturers.

Cerberus is also a registered employer of lobbyists in California, Ohio, Michigan, and Pennsylvania — states where the firm also collects public pension investments. Subsidiaries of Freedom Group such as Remington Arms and Bushmaster have funneled thousands of dollars into state campaigns in New York, South Carolina, and Maine in recent years, according to data compiled by the National Institute for Money in State Politics.

Since 2007, Cerberus’ managers have made more than $1 million in federal campaign contributions, most of it to the Republican Party and its candidates. A big chunk of Cerberus’ federal contributions last year went into an unsuccessful attempt to reelect Ben Quayle to the US House of Representatives. Former Vice President and Cerberus Capital chairman Dan Quayle is Ben’s father, and both Quayles, in and out of office, have promoted zero-regulation gun policies that have been highly profitable for Cerberus.

After the Aurora, Colorado theater slayings in which a deranged gunman used a Remington shotgun (one of Freedom Group’s weapons) to kill twelve people, Ben Quayle, then still a Congressman, was outspoken in his opposition to any gun control legislation. “You can’t regulate evil,” Quayle told the Daily Caller, dismissing the notion that round ammo clips should be banned.

As such, the California teachers’ retirement system will continue to be a financial partner with a company that pays money to and employs politicians and lobbyists who oppose stricter gun control laws — regardless of whether that company finds a buyer for Freedom Group. Moreover, Cerberus will still be invested in companies profiting from weapons and war. For example, with part of the half-billion-dollar investment made by CalSTRS in 2007, Cerberus bought DynCorp International, a military contractor that supplies armed private soldiers to war zones around the world.

As for CalSTRS, it has directly invested in dozens of companies that manufacture controversial weaponry for both civilian and military markets, including Lockheed Martin, Northrop Grumman, TASER, United Technologies, and Alliant Techsystems. CalSTRS investments in US, European, and Israeli weapons makers totals at least $900 million, according to the pension’s most recent portfolio report. Like its private equity partner Cerberus, some of CalSTRS’ direct weapons investments have appropriately bellicose names. One military contractor in which CalSTRS holds a half-million-dollar stake, Kratos Defense & Security Solutions, Inc., is named after the Greek winged demi-god of war.