.Tar Sands in the East Bay?

Fossil fuel companies deny that they're preparing to bring dirty tar sands oil from Canada to the Bay Area, but environmentalists say it's only a matter of time. 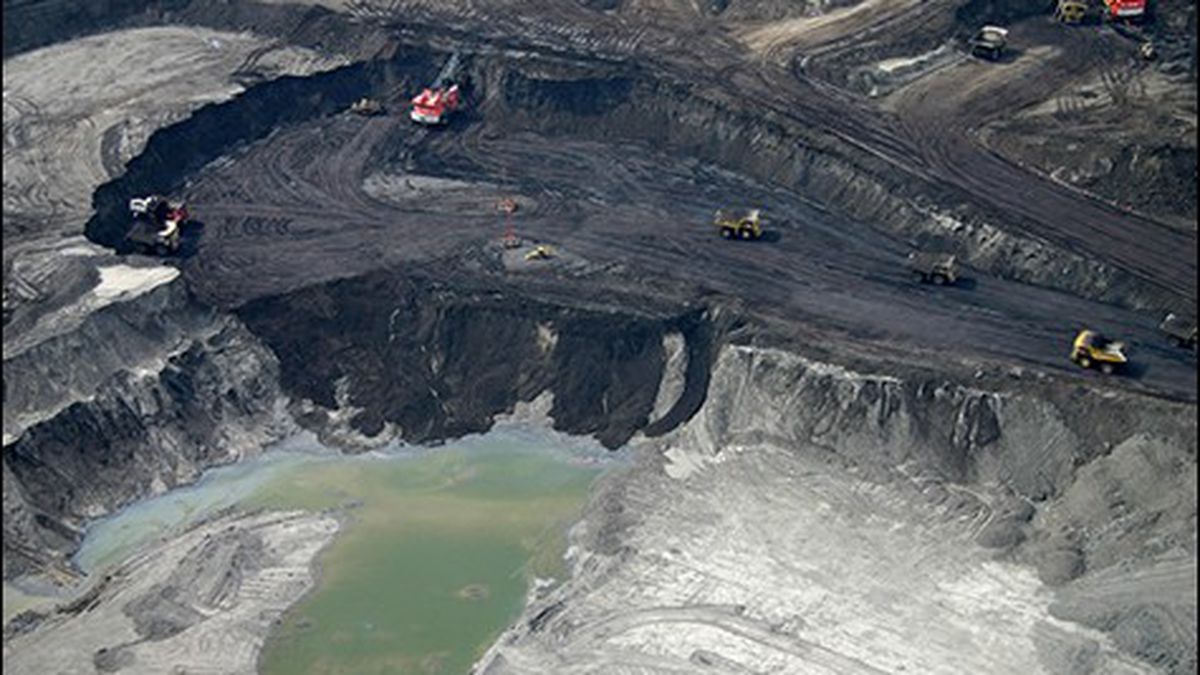 When Lyana Monterrey learned that the energy company WesPac was planning to build a giant crude oil transportation hub right next to her neighborhood in the East Bay city of Pittsburg, she was horrified. “I don’t want that nasty stuff in the air!” she said. She also had numerous other concerns about the proposal: “property values; water; wildlife; the danger of accidents; proximity to homes, churches, schools.”

At a city hearing this summer, Monterrey was among many residents who voiced opposition to the project. Since then, she and a group of other Pittsburg residents have sprung into action, circulating a petition, encouraging people to send letters, creating a Facebook page, and generally “spreading awareness,” she said.

“Pittsburg always gets dumped on,” added longtime community activist Jim MacDonald in an interview. He noted that the city already hosts two fossil fuel power plants and a facility to store petroleum coke, a toxic refinery byproduct. In a city with high numbers of low-income residents, many of whom are people of color, MacDonald said his “issue is environmental justice.”

Communities for a Better Environment (CBE), the Sierra Club, 350 Bay Area, and the West County Toxics Coalition also sent the city a letter expressing concern that the WesPac project would increase greenhouse gas emissions. Both the Contra Costa Water District and the Bay Area Air Quality Management District also have submitted letters warning of possible hazards from the project.

WesPac, an energy infrastructure company, is proposing to build a rail terminal, a marine terminal, and a new pipeline, making it possible to bring crude oil from drilling sources in inland North America, at a time when the traditional sources of crude along the West Coast — the oil fields of California and Alaska — have been declining. And environmental groups predict that the rail terminals will bring in large amounts of crude oil from Canadian tar sands. And as environmentalists have been successful recently at blocking pipeline projects, drilling companies in Canada are increasingly looking to rail to distribute their product.

A switch to tar sands crude oil would increase emissions of both local pollution and greenhouse gases. The risk of accidents would also rise, environmental groups say, because tar-sands crude is high in sulfur, which corrodes refinery pipes. A corroded pipe caused last year’s massive explosion and fire at the Chevron refinery in Richmond.

In an interview, Art Diefenbach, vice president of engineering at WesPac, contended that the project would minimize the dangers of air pollution and accidents with “tanks refurbished to the highest quality standards.” He also pointed out that rail transportation creates less air pollution and greenhouse gases than tanker ships. And the charge that the terminal will be used to import tar-sands oil is “a false accusation,” he said. “Our customers [the refineries] are not talking about that.” Instead, they are asking for the high-quality crude oil being mined by fracked shale deposits in North Dakota, Colorado, and Texas, he said.

Scientists at the Natural Resources Defense Council (NRDC), however, argue that Canadian tar-sands oil is by far the cheapest source of crude currently available. They also point to recent reports of a steep decline in the productivity of fracked shale-oil mines after the first few years of operation. So even if WesPac is not currently planning to import tar-sands oil, they say, trends in the industry make that an attractive option, and the creation of a rail terminal makes it possible.

The battle over WesPac’s proposal is one of several such fights in and near the East Bay as neighbors of oil refineries are joining with environmental organizations to challenge a series of proposed developments that would make it easier to import and process dirty tar sands oil from Canada.

But in addition to WesPac, spokespeople for projects proposed by oil companies Chevron, Valero, and Phillips 66 contend that their plans will produce economic benefits for the region and will include measures to reduce emissions and ensure safety. They also deny that the projects would lead to importing tar-sands oil. However, scientists at CBE and NRDC have released detailed analyses of the proposed projects, along with trends in the oil industry, to support their claim that the projects will hasten the arrival of tar-sands oil to the Bay Area.

Across the Carquinez Strait, Benicia residents are also “concerned about the cumulative air quality impacts from transporting and refining Canadian crudes,” said Marilyn Bardet of the Benicia Good Neighbors Steering Committee. “And also about the possibility of spills.” She said no one has yet found a way to clean thick tar-sands oil from sensitive environmental areas.

Bardet and her neighbors, along with scientists at the NRDC, worry that Valero’s planned construction of a rail terminal to bring in “North American crude” to its Benicia refinery will, in fact, result in an influx of tar-sands oil. Last month, residents and environmentalists succeeded in persuading the city to do a full environmental impact review of the proposed project.

Valero’s proposal to the city does not specify which sources of crude oil they expect to tap, but the plant is now completing a major upgrade that will allow it to process lower-quality crude. Reports about the project in the energy-industry press state that it’s designed to bring in crude oil from Canada and North Dakota and note that the company is seeking to lower the cost of the crude oil it refines. Valero’s own chart, reproduced in an NRDC report, shows Canadian crude as by far the least expensive.

Some of the neighbors of the Phillips 66 refinery in Rodeo immediately thought about the potential for explosions and fires when they learned about Phillips’ proposal to build six pressurized tanks to liquefy and store propane and butane, byproducts of the oil refining process. Charlie Davidson, who lives near the refinery in Hercules, said he’s also worried that the project is part of “the trend toward bottom-of-the-barrel, nonconventional crude.”

But Greg Karras, senior scientist at CBE, noted that the butane and propane collected and sold by Phillips 66 will just be burned elsewhere — and thus would increase overall greenhouse gas emissions, not reduce them. Moreover, low-quality “heavy” crude oil produces the most propane, and he questions whether Phillips 66 can, as it claims, meet its stated goals for production of propane and butane without shifting toward more dirty oil.

“In the past the industry has not always told the whole truth,” Karras noted, adding that the county should at least require Phillips to provide data to back up its claims. In addition, the Phillips 66 website quotes CEO Greg Garland describing the company’s goal of lowering costs by bringing cheaper crude, including “heavy crude from Canada” to California refineries.

Environmental groups and neighbors are also challenging the county’s preliminary finding that the risk of accidents, air and water pollution, and threat to marine life from the project are “less than significant.”

In Richmond, residents are still concerned that Chevron’s proposed upgrade of its refinery will lead to the processing of tar-sands and other low-quality crude oil. Chevron’s first planned upgrade was blocked in 2010 by a CBE lawsuit; residents are now waiting for the city to produce an environmental impact report on the revised proposal.

But since the proposal does not provide details, environmentalists fear that Chevron intends to achieve “zero net emissions” by buying greenhouse gas emissions credits through the state’s new cap-and-trade system rather than reducing its own emissions. Ritchie added that the project would allow the plant to process higher-sulfur and heavier crude oil “within the [plant’s] existing range,” but that includes oil “derived from heavy crude oil and oil sands,” according to a statement Chevron sent to the city in 2007.

Besides going toe-to-toe with refineries on local projects, community and environmental organizations are pressing the Bay Area Air Quality Management District (BAAQMD) to create regulations limiting refineries’ environmental impacts. BAAQMD is now in the process of developing a “Petroleum Refining Emissions Tracking Rule.” A coalition of community, labor, and environmental groups has submitted a proposal asking the district to adopt a tougher rule that would monitor emissions more closely and impose “meaningful consequences” on refineries that produce more than allowed. They want the district to give each refinery a limit for production of each pollutant that poses a health risk and require them to reduce emissions over time.

Meanwhile, 350 Bay Area and other organizations are pushing the BAAQMD to create a Bay Area Climate Action Plan, setting a regional goal to match the state goal — reducing greenhouse-gas emissions 80 percent by 2050 — and detailing plans for how to get there.

Community and environmental groups working on all these issues are also starting to connect. Groups that organized an August march at Chevron in Richmond have formed the Sunflower Alliance to continue working on refinery issues. On November 6, Bardet from Benicia, Monterrey from Pittsburg, and other refinery neighbors will join representatives from environmental organizations in a panel discussion on regional refinery developments at the Ecology Center in Berkeley.

“Here I thought I was working on my little Pittsburg,” said Monterrey. “Now I’ve found out this is just a small piece of the puzzle.”