Feasting on tripe, tongue, and brains. 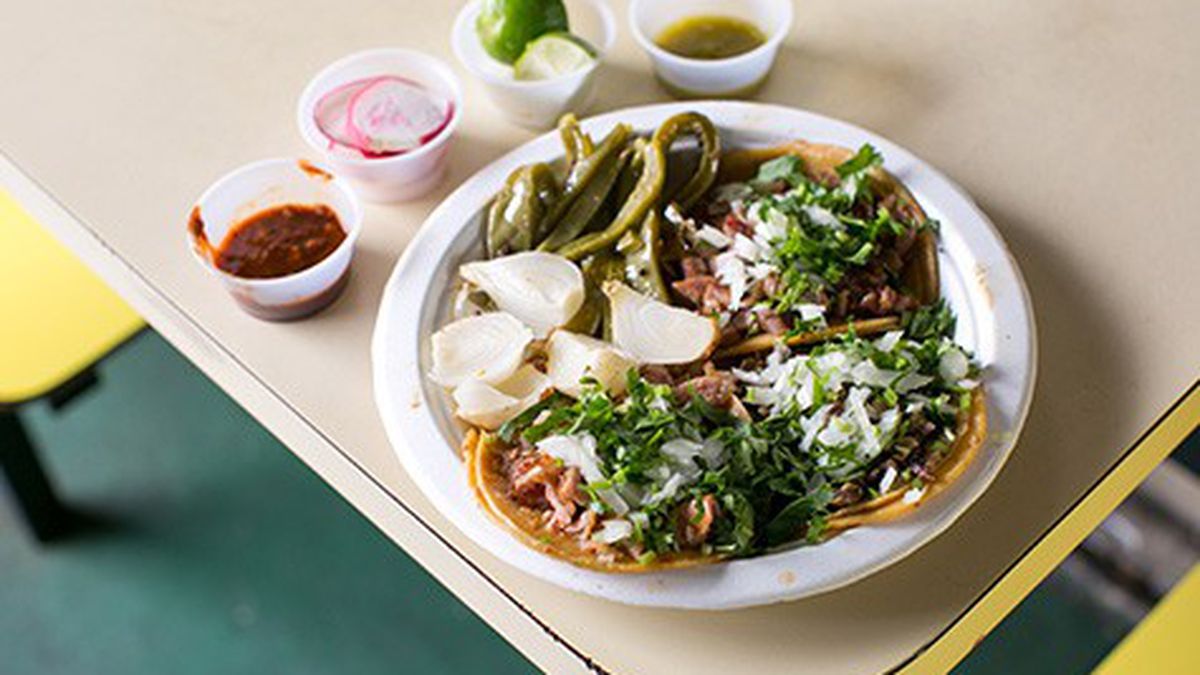 A taco crawl through Oakland’s Fruitvale district might take you to the Mi Grullense truck for lengua; to El Novillo, the taco truck in the parking lot of Guadalajara Restaurant, to load up on fried pork intestines; and perhaps, for a change of pace, to the sit-down restaurant Obelisco for crispy tacos stuffed with potatoes.

And if you’re the kind of taco eater who stays tapped into which dining establishments the city’s Mexican population holds in highest regard, you might eventually find yourself standing in front of a low-slung green building at the intersection of International Boulevard and 47th Avenue, where an oversized signboard displays the restaurant’s rather unorthodox name: Taqueria El [email protected]

El Paisa has been open since at least 2008, but I had never heard of the taqueria until a few weeks ago, when the Oakland-based restaurateur Jay Porter — a San Diego transplant and taco enthusiast — offhandedly tweeted that the place serves the best tacos he’s eaten in the United States. That kind of praise might explain why the place doesn’t appear to be hurting for business. On a recent Sunday, the parking lot was jam-packed with pickup trucks, and the line inside stretched back to the restaurant’s quirky rear patio, where rainbow-hued piñatas hang from the ceiling and tables lean against the wall at a precarious 30-degree angle.

El Paisa offers the usual taqueria standards: burritos, tortas, quesadillas, and rice-and-beans-laden platos. But the place’s true specialty is tacos. They’re simple and unfussy: a double layer of corn tortillas topped with a generous pile of some odd cut of meat, usually. And yet the end product is often so spectacular, it’s difficult to describe an El Paisa taco without just lapsing into profanity.

The taqueria excels at what Americans usually refer to as the offal cuts — those less popular, often organ-y, odds and ends of an animal that much of the rest of the world has always held in high esteem. For starters, El Paisa serves as good a cabeza (assorted pickings from a slow-cooked cow’s head) as you’ll ever encounter — soft, collagenous meat mixed with bits of unctuous skin and the occasional, surprising, but deeply pleasurable crunch of ear cartilage. The lengua, too, is top-notch — cut into long, thick slices that have all of a properly cooked tongue’s characteristic tenderness, without any of the sliminess.

But if you’re going to order only one taco at El Paisa, let it be the tripa, or beef tripe, which isn’t to be confused with the more common tripas, which often refers to pork intestine. At El Paisa, the taqueros keep a big, wide pot of stock simmering all day mainly for the purpose of cooking the tripe. The result? A textural revelation — wonderfully soft and squishy, but also rich and fatty, and imbued with a deep, deep savoriness. My dining companions’ reactions ranged from a simple, “God damn,” to an extended bout of silent, effusive nodding. I’ll just come out and say it: This might be the best taco I’ve ever eaten.

What I love the tacos at El Paisa is that they’re straightforward: just meat, with a light scattering of chopped onions and cilantro. And because the meats are, by and large, cooked and seasoned perfectly, the taco is the vehicle that highlights that meat with the least number of other distractions.

Instead of loading up each taco with garnishes, El Paisa leaves it to the customer to take advantage of the excellent salsa and “fixings” bar in front, which features exceptionally fresh-tasting versions of your standard green and red salsas. Fieriest of all was an additional chunky green salsa of indeterminate composition that looked vaguely guacamole-like, but was hot enough to set my mouth ablaze. When you place your order, you can request an equally potent, amped-up version of the red salsa, which the taqueria keeps in a big stone mortar behind the counter, as well as a couple of other free, “secret” add-ons: exceptionally sweet cipollini onions and nopales (cactus pads), which both simmer in the pot before getting seared on the grill. Also available from the bar: limes and radish slices, as well as a couple of more unusual offerings: chili-laced cucumber slices, and tangy carrots and potatoes cooked until just soft.

Of course, all of this was the proverbial icing on the cake — the tacos were delicious when eaten plain. You have to appreciate the unvarnished, workmanlike vibe of a place like this, where all night I listened to the steady knock-knock-knock of the taqueros working the blade of their cleavers against a cutting board. Among the customers, I don’t think I heard a word of English spoken.

After several failed attempts to talk to the owner — whose name, I was told, is “Manuel” — I was left with a slew of unanswered questions. Does the fact that El Paisa’s sign features the official crest of the Guadalajara-based Chivas soccer team mean that the food, too, is rooted in Mexico’s Jalisco region? What is significance of the internet URL nomenclature, when, as far as I could ascertain, the restaurant doesn’t actually have a website? Am I correct or wildly incorrect to read the name as “El Paisa bomb dot com” — and if so, can we agree that it might be the greatest name in the history of all restaurant names?

Alas, all I have to report on is the food, which was great across the board. The suadero, for instance, was a vaguely brisket-like cut whose exact location on a cow is the subject of some debate on internet forums, but which I’d recommend to anyone who’s always disappointed in carne asada, despite how appealing the idea of a steak taco sounds. (Even at El Paisa, where the meats were uniformly excellent, the carne asada was clearly the weakest link — flavorful, but dry and overly chewy.) It turns out that suadero, at least as prepared at El Paisa, is the cut that yields the tender-but-toothsome quality you want in a steak, with a healthy dose of gelatinous bits attached as a bonus, adding even more texture and savory flavor. (In that sense, this is the cut of beef that’s most reminiscent of pork.) The suadero also made a fine filling for the one quesadilla I tried — a nice bit of cheesy goodness that was served cut into quarters with pico de gallo, thick avocado slices, and a little tub of crema, which added just the right tangy note.

Fridays, Saturdays, and Sundays are when El Paisa offers its most obscure meat selections, including beef brains, which I ordered unknowingly during my first visit, not remembering what sesos were until I looked it up afterward. These little globules of offal were milky-white inside, creamier and more delicate than liver, with an earthy, mineral-y sweetness similar to sweetbreads — delicious with a touch of lime and salsa. I also loved the buches, or pig stomach, which looked like thick elastic bands, and were both tender and chewy, with the funky, earthy savoriness you expect from an internal organ.

With all this variety to tempt me, I couldn’t convince myself to dedicate the stomach space necessary for a burrito. I did, however, order one of the other weekend specials: the carnitas, in the form of a torta — very tender chunks of slow-braised pork shoulder, creamy avocado, and a thick slice of queso fresco, all served on an oversized round bun. It was a terrific torta — an attraction in its own right at almost any other restaurant. After a few bites, though, all I could think about was ordering another round of tacos.