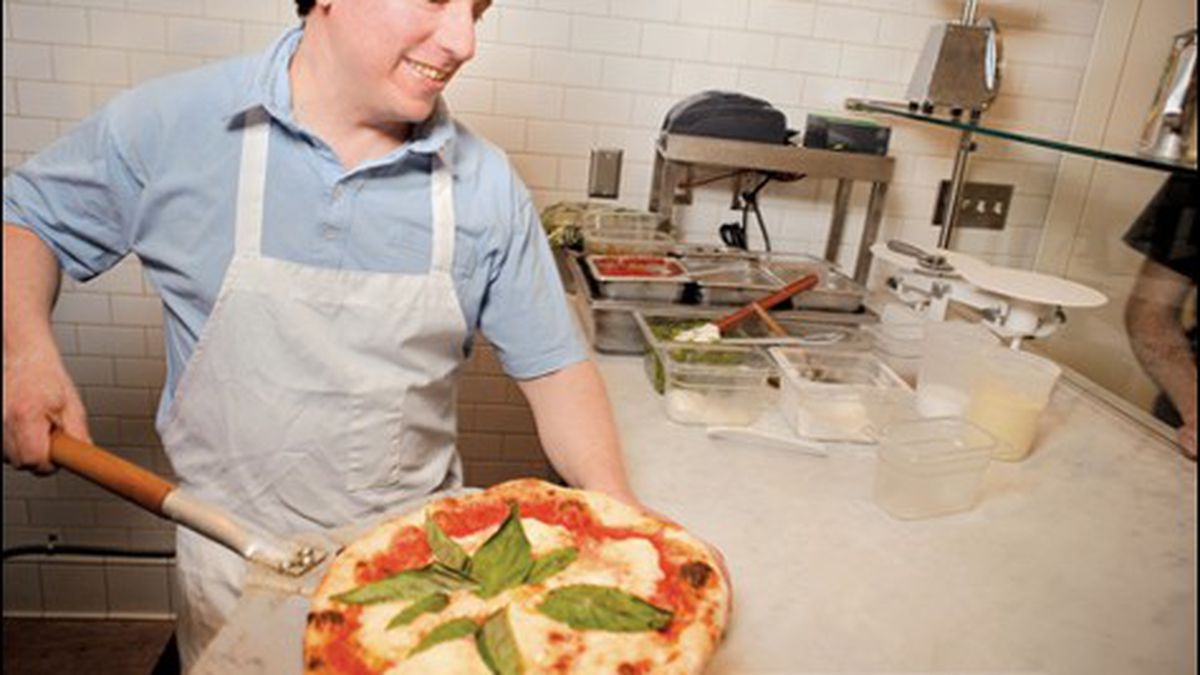 The Elmwood shop makes world-class picnic meals, so you don't have to.

Braised Berkshire pork shoulder with gremolata, a chopped-garlic/parsley/lemon-zest combo customarily served with osso bucco alla Milanese. Whole roasted antibiotic-free chicken from Sonoma County’s Fulton Valley Farms — described as a “producer of roasting chickens in the Buddhist tradition” — brined with herbs, lemon, and garlic. Grilled albacore tuna pipérade: that is, Basque-style, with onions, tomatoes, and peppers. Throw in some brown rice from Massa Organics, a fourth-generation family farm near Chico. Add a mixed-berry tart and a chocolate/cream-cheese cupcake with Valrhona pearls, baked by a former Chez Panisse pastry chef. Now wrap it all up to go.

That’s the modus operandi at Summer Kitchen Bake Shop: serious food, conceptualized and crafted by seriously talented alumni of top-flight restaurants for seriously savvy customers on a street with almost as many Michelin-starred and Zagat-rated restaurants as fire hydrants. Seriously serious food — for takeout.

Ensuring that the East Bay picnic scene will never be the same again are husband-and-wife team Charlene Reis and Paul Arenstam. Reis is a Chez Panisse veteran. After stints at SoCal hotspots Fennel and Patina, Arenstam — a Culinary Institute of New York grad — moved north to work at San Francisco’s Rubicon. In 2000, he opened his own restaurant, the Tenderloin oyster-bar/brasserie Belon. Five years ago, he became the executive chef at Americano Restaurant in the Embarcadero’s trendy Hotel Vitale; in February, he left the gig to focus on SKBS.

Soon after meeting at cooking school, the couple sought seasonal work on Martha’s Vineyard. Boston native Arenstam knew the region well, but for Southern Californian Reis, it was a revelation.

“She loved that airy, beachy look and feel” rendered poignant by the shortness of New England summers, Arenstam said. “If you’ve ever spent any time on the Vineyard, you know that special feeling, how ephemeral summer is. It comes and it goes.” A New England tradition is “summer kitchens”: outbuildings in which cooking, canning, baking, and preserving were done to keep main houses cool before the advent of air conditioning.

The aesthetic appealed to Reis so strongly that it inspired the name and design of the couple’s shop. Open since October, it sports blue-and-white tiled walls, board-and-batten siding, starfish, and sea glass. Two teensy tables and a short wooden counter are serviceable for savoring house-made muffins and scones and Blue Bottle coffee — hand-brewed, here, by the cup — or even soup and sandwiches in a pinch. But the real meals, the pasta and pizzas and salads and roasts, are meant to be eaten elsewhere. Half the menu is permanent; the other half changes month by month to showcase seasonal produce. Soups rotate daily.

Every bite of our eleven-inch shaved broccoli/green garlic/Fontina/chili pizza was pungent and chewy, all the way to its outermost edge, revealing extra care in a world where most pizza rims serve merely as flavorless handles. Pizzas can be ordered here half-baked to finish in the oven at home.

Deceptively simple, the Anson Mills artisan polenta proved addictive, its sunny-yellow richness sneaking up and then washing over us like a cheesed granular form of ice cream. Among several vegetarian options, roasted broccoli with pine nuts, chili flakes, and salty-crumbly Grana Padano cheese — one of the world’s earliest hard cheeses, invented by medieval monks near Milan — lent elegant, long-overdue gravitas to an underrated vegetable used far too often as filler, but the chili flakes were a jarring misstep. Dense in a good way, grilled-asparagus panini with herbed goat cheese were a crunchy revelation. Sara’s organic spaghetti was hearty, studded with enough tangerine-size, grass-fed Hearst Ranch meatballs to save some for later. Seth liked the festive flavor/texture-slam of a sandwich in which crispy bacon boldly confronted the soft sweetness of avocado and pillowy red piquillo pepper, with wild arugula whispering a bitter refrain. Other made-to-order sandwiches feature flank steak, fennel, and barbecued pulled pork. Salads sport fava beans, green lentils, ricotta salata, and couscous.

These are ingredients and preparations, Arenstam said, “that for a long time were available only in really fine restaurants. But we’ve taken them out of that exclusively fine-dining environment and put them into a grab-and-go environment. As parents, we want to help people pick up dinner” — or picnic provisions such as orzo salad and Fulton Valley fried chicken. Other conveniences include the nut-and-snack-packed “Cocktail Party in a Box.” For picnics, hefty cookies such as the double-chocolate-chip-cherry travel well. King-size cupcakes and kill-me-now masterpieces such as a salted-chocolate-caramel tart are best treasured soon, in perfect stillness, with plates, knives, forks, and spoons.

In 2008, Arenstam earned the prestige of being selected as a delegate to Terra Madre, the biannual Slow Food conference in Turin, Italy. His and Reis’ commitment to sustainability shines in their use of fair-trade coffee and hormone-free meat, their relationships with small local growers and producers, and their fully trans-fat-free menu. All of SKBS’ kitchen grease is transformed into biodiesel.

As a steady stream of customers flows into the shop, then out with parcels, you wonder while waiting your turn: Who are they? Where are they taking this? With whom will they share it? Imagined narratives spin in your head, involving aioli and doorbells. This never happens in a sit-down restaurant, where those stories are complete and rendered in full view. You see who ate what where, and with whom. By contrast, takeout is a realm of curiosity, plans, assignations, quiet desperation, surprises, and secrets. Curiosity combined with confit and caramel is glorious.&#8;

Then What Did She Do?

A Hellish Week in Oakland