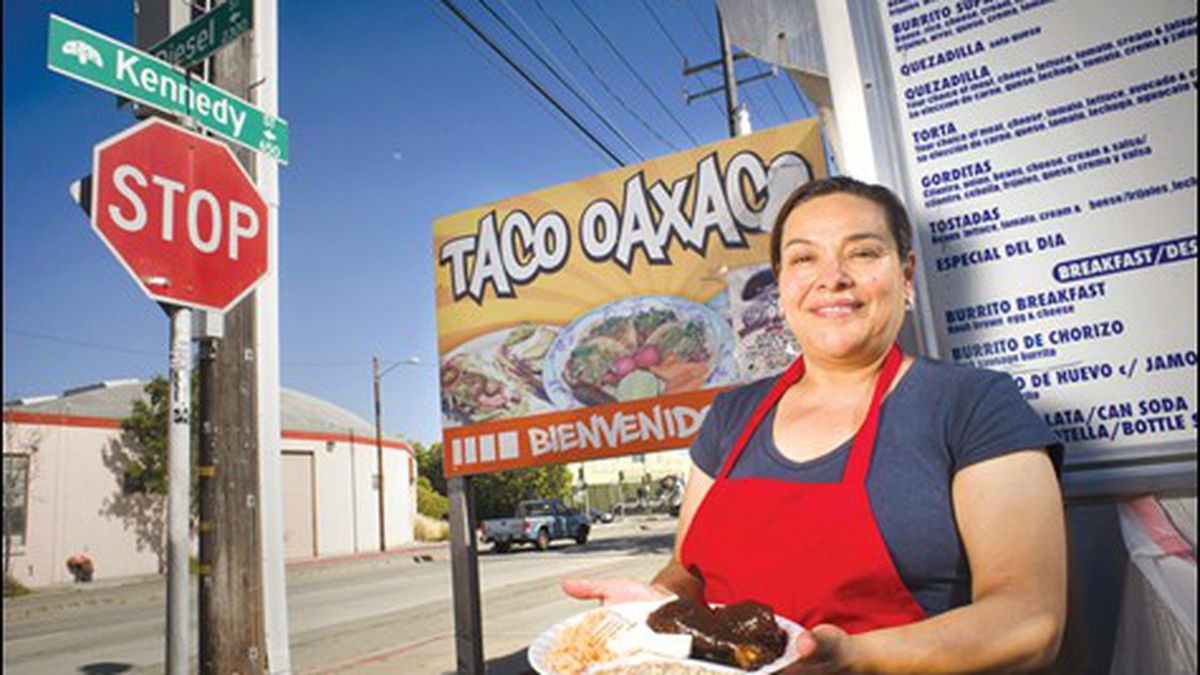 Jonathan Gold of the LA Weekly once said that if you wanted to sell food and were born in another country, the law should force you to cook at least one dish from your place of origin. He was kidding (I think), but consider: a restaurant making bank off ketchup-laced pad Thai and jungle curry with the Brix reading of Gatorade might perennially have to keep frog-leg kaeng khae lurking somewhere on its laminated bi-fold menu.

With taco trucks, though, taqueros would be crazy to wander too far from the high-volume chicken super burrito, taco al pastor, and carne asada torta with a side of chips. In Oakland, as anywhere, the taco truck is built for efficiency. It’s about filling a need, not flaunting culinary fancies. Cabeza, pescado, lengua, pollo asado tacos — all with only slight differences from truck to truck, each only $1.25 up and down the length of Fruitvale.

Still, if you’re moderately lucky you find a truck with tripas (fried small intestine, aka chitlins, for a 75-cent surcharge). And if you’re really lucky — and you know where to look — you find a truck with genuine regional flavor, one or two specialties from Michoacan, maybe, or Mexico City, or Puebla. Where they exist, they’re among the few things capable of distinguishing one lonchera from another.

That part about knowing where to look, though — it sounds easier than it is. I thought I’d scored recently, tooling around Emeryville near the Pak N Save on San Pablo Avenue near 40th, when I noticed a truck painted a painful neon lime: El Sierreno Sinalouense.

El Sierreno is a new lonchera. Because owner Jorge Rubio doesn’t have a permit to operate in Emeryville, his truck now appears weekdays on Oakland’s Embarcadero East, and on weekends on Seventh near the West Oakland BART station. It’s a mariscos truck — there are the usual meat fillings for tacos, plus a ceviche tostada, shrimp coctel, even the typically massive cocktail sampler called agua chile. I thought the name was a tip-off that Rubio was paying homage to the coastal state of Sinaloa.

Turns out Rubio’s from Jalisco — the state that gave Fruitvale much of its early Latin soul, back in the Seventies. Granted, Jalisco’s a coastal state, too, and the ceviche tostada I tried had plenty of bite and sparkle: hunks of cucumber, tomato, and white onion, with chunks of fat, pink shrimp. It was tossed with the juice of Mexican limes, and a blistering little salsa picante whose charred flecks spread through the mixture, same as those dark bits of oregano peppering pupusa curtido. It was nice — like the fish taco, with its cooked salsa of tiny-seeded tomatillos I suspect were milperos, the small, earthy-tasting field variety — but not exactly the regional touchstone I was seeking.

I chased down other leads: the lady from Veracruz who runs The Taco Panzon, and who parks on Campbell Street near West Grand. Seared fajita-style on the lonchera‘s flattop, the fish in my burrito regular was delicious enough to justify tracking down on a sleepy afternoon — caramel-brown basa fingers, mixed up with soft-sweated green bells and a purée of arbol chiles and caramelized onion so sweet it tasted like cinnamon.

Again: good. But not the strong statement of regional identity I’d hoped for. In the end it came from a truck that’s been around for a decade or so, a truck I’d somehow always missed.

Yolanda Cisneros grew up in Juxtlahuaca, a town in the bare, scrubby mountains of Oaxaca. For ten years she has parked her Taco Oaxaco truck near the intersection of Kennedy and Diesel, anchoring the sun-scoured dead-end utility road running behind the county hazardous waste drop-off. That’s on weekdays; on weekends she parks at the Ashby flea market. And this year, Cisneros rolled out a second lonchera, a hamburguesa truck slinging on International Boulevard at 42nd Avenue.

Cisneros offers the regular roster of taco proteins, which you can plug into the usual size range of burritos, tortas, and quesadillas. Skip to the bottom of the menu board and you find Oaxacan gorditas, thick, pupusa-like tortillas split and filled, in sandwich fashion.

Cisneros and her cooks pat out the gorditas themselves, using either fresh masa from La Finca tortilleria on Foothill, or from dried masa mix. Best filling: Oaxacan-style carnitas, plush hunks of pork shoulder stewed soft. It mingles with shredded lettuce, refried beans, a salsa mingling tomatillo and chile, and crema.

You can get a sheet of chicharrón (fried pork rind — Cisneros buys them pre-fried). Each is the size of a double sheet of paper towels, and as dry and crisp as an ice cream cone, topped with a pile of iceberg, avocado, and wedges of cueritos, tangy, waxy-textured pickled pork rinds. There’s a daily special, too — huaraches, maybe, thick, sandal-shaped, slightly concave tortillas filled with pot beans and a scattering of crumbled queso fresco. A thin fried pork chop sat on top.

El Taco Oaxaco’s crowning taste of Juxtlahuaca, though, is the Friday special: chicken mole, a luxuriously viscous sauce napping a couple of stewed legs and a wedge of tender queso fresco. Cisneros uses a commercial mole paste she gets all the way from Juxtlahuaca (she asks friends and relatives to bring her back a tub), thinned with chicken stock and simmered. It has peanut richness, dark spices you taste at the back of your throat, and moderate (but lingering) chile heat.

Forget the flimsy plastic fork — Cisneros’ mole is good enough you don’t mind staining your fingers the color of raw umber, tearing off bits from the tortillas that come with and prying off sauce-drenched strands of chicken and cheese.

Just don’t ask for it in a taco.

I Left My (New Delhi Freelancer) in San Francisco