Fictional/Familiar subverts conventional perspectives in the representation of space. 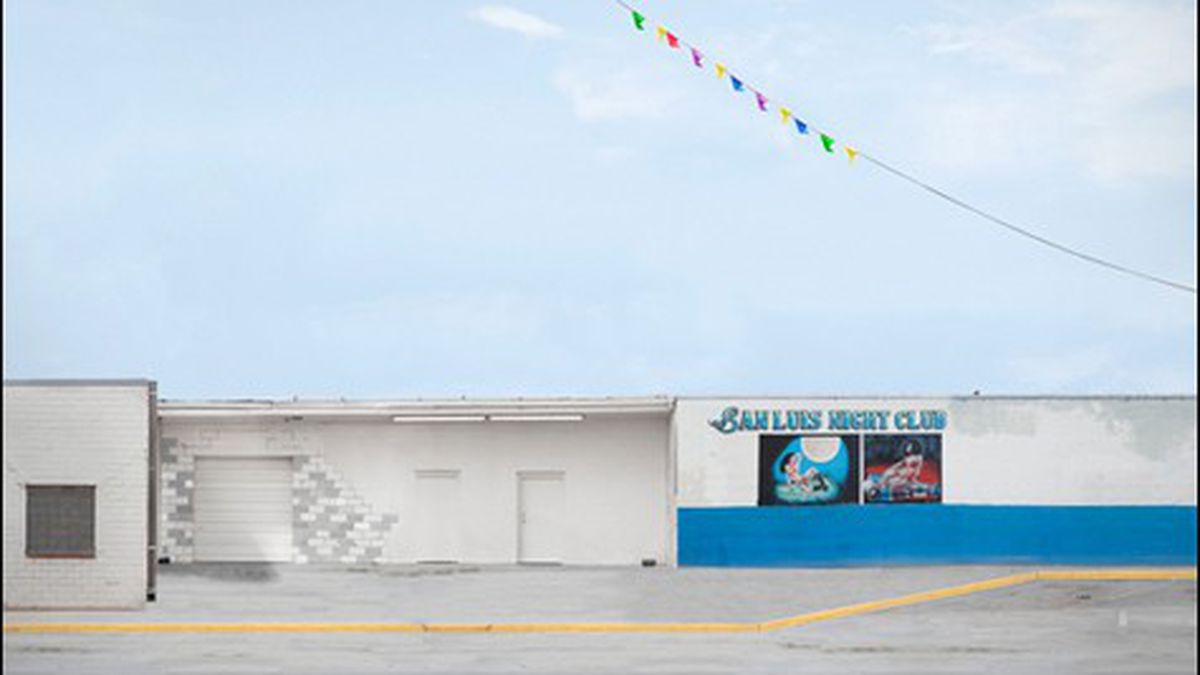 There is clearly some digital prestidigitation at work in Leigh Merrill’s “The Strip,” a six-panel sequence of photographs depicting a seemingly endless row of commercial facades from one impossible perspective. It soon becomes apparent that this “block” is a composite of buildings, spliced from various photographs and sutured together between seemingly unbroken strips of road and sky. If the repeating oil stains on the road do not give away the artifice, then the repetition of buildings will. Two different sides of the San Luis Nightclub appear in the lineup. However, they are separated by an auto shop and a taller building bearing a green pattern — what turns out to be the front side of a postcard seamlessly planted by the artist.

Despite its fabricated nature, one might recognize this kind of locale: drab, suburban commercial sprawl — something that will be familiar to any American who has ventured to the periphery of urban areas, especially those at remove from either coast. A string of colorful flags in one panel brings little cheer to this scene, the dreariness of which Merrill amplifies by excluding any people, cars, or other signs of life. Through her digital fabrication of repeating structures, the artist suggests both the seeming endlessness and placelessness of such a suburban or ex-urban strip, where everything is basically interchangeable.

Merrill shares Swarm’s main gallery with Cybele Lyle, an artist who seems intent on revealing something similar about space and place, but from an architectural angle. She presents a series of works consisting of photographs of natural vistas, cropped into geometric shapes and collaged at angles that suggest spatial planes.

The line of thought inevitably works itself into literal space, in a site-specific sculpture consisting of four irregularly shaped panels, each bearing a blurry print, rotated about the gallery’s central support beam. While evocative of architectural forms — doorways seen from multiple perspectives at once, perhaps — the piece offers no immediate gestalt, requiring the viewer to circle it to get a sense of its shape and its self-interrupting portrayal of hillsides, a desert expanse, and a bay.

Both artists, then, present the viewer with a disorienting relation between space and the representation thereof. Might conventional representational modes — ones that defer to conventional rules of perspective and continuity, not to mention the architecture in which they are presented — unduly confine the viewer? Indeed, the gallery presents Lyle’s work as “simulating an alternative environment where all perspectives are welcome.” It sounds like a cubist concern, enunciated here with a 21st-century inflection.

Marking the end of a seven-year run in the Jack London district, Fictional/Familiar will be Swarm Gallery’s final exhibition in its current space. While the future of Swarm is uncertain, this show stands as an exemplar of the quality of programming that the gallery has maintained thus far.

Editor’s note: The original version of this story got wrong the title of the exhibition. This version has been corrected.